Today’s post is an excerpt adapted from A Writer’s Guide to Beginnings by Paula Munier (@PaulaSMunier), recently released from Writer’s Digest Books.

There are a number of tricks to making sure that you get your story off to a hot, hotter, hottest start, no matter what your genre. I know, I know, all of you people out there who are writing literary fiction are thinking, “I don’t need a hot start to my story.” Well, think again. Even beginnings for literary stories must aim for, at minimum, a slow burn.

I live in the Northeast, where winters can be brutal. (As I’m writing this, New York City is digging out of some two feet of snow.) When I moved here a dozen years ago after nearly twenty years in balmy California, I learned that the secret to staying warm as the thermometer plunges is to keep the fires burning on all fronts. I discovered the cozy beauty of cashmere sweaters, fingerless gloves, and glowing woodstoves.

But I also learned that sometimes you have to break down and leave the house. Go begin a journey, even if it’s only to the grocery store—which means venturing out into sub-zero temperatures to a frigid vehicle that may or may not start. It was a cold prospect I dreaded, until I happened upon two spectacular tools: remote car starters and heated car seats.

With a remote car starter, you can start your car from inside your warm house, wait until your automobile is revved up and ready to go, and then slip into a warm seat in a warm vehicle with a warm engine and hit the road. This is a beautiful thing.

You want to do the same thing with your story. Every reader starts a story cold, and you want to warm the reader up to your story as quickly as possible. You want the reader to slip into a warm seat in a hot story with a blazing beginning and take off for parts known only to you, the writer.

The good news: There are literary equivalents to remote car starters and heated car seats. Let’s take a look at these, one by one.

Start With the Scene That Introduces Your Story Idea

This is the easiest and most efficient way to get your story off to its hottest start. So if it’s at all possible to begin this way, you should, just as Peter Benchley did in the first scene of his classic horror novel, Jaws. Yes, the terrifying film was based on the equally terrifying New York Times bestseller by Benchley. The details of the novel’s opening scene and the film’s opening scene differ—the couple in the book are a man and a woman sharing a beach house rather than a couple of teenagers at a beach party—but the action is the same: The woman goes for her last swim in the sea while her drunken companion passes out. And there we have it, the big story idea of Jaws: a monster great white shark terrorizes a seaside resort town.

Start With the Scene That Foreshadows the Story Idea

The most famous example of this might be the opening of Shakespeare’s Macbeth, in which the three witches appear as a bad omen, especially for Macbeth. Many fairy tales begin this way as well. In Charles Perrault’s Sleeping Beauty, a king and queen who’d waited years for a child celebrate their new baby princess’s christening with a celebration. They invite the seven fairies of the kingdom to the feast. But an eighth fairy shows up, one long thought dead, and she curses the baby. This is the scene that foreshadows the day when, years later, the princess pricks her finger and falls into a long sleep … and, well, you know the rest.

To use a more contemporary example, consider the tender and funny New York Times bestseller The Storied Life of A.J. Fikry. In the opening scene, thirty-one-year-old book saleswoman Amelia Loman is stepping off the ferry to Alice Island, on her way to her first meeting with A.J. Fikry, owner of Island Books. She takes a call from Boyd, her latest “online dating failure,” determined to let him down gently, only he’s insulting, apologetic, and finally, weepy. Finally, she tells him that it would never work out because he’s “not much of a reader.” She hangs up and remembers her mother’s warning that “novels have ruined Amelia for real men.” And as she nearly walks right past the purple Victorian cottage that is Island Books, Amelia worries that her mother might be right.

In this scene, the foreshadowing is subtle but clear: Amelia needs a man who reads, and she’s about to meet one who may seem unsuitable in nearly every other way save that one … but still, the possibility for romance is there.

Start With the Scene That Sets Up the Story Idea

We’ve seen this one a million times. Think of the opening scene of the original Star Wars, in which Princess Leia hides the plans for the Death Star in R2-D2, setting up the story idea.

In Jeannette Walls’s shattering memoir The Glass Castle, she opens with a scene that begins with the unforgettable line, “I was sitting in a taxi, wondering if I had overdressed for the evening, when I looked out the window and saw Mom rooting through a dumpster.” She goes on to describe this encounter with her mother, setting up the rest of the novel, which tells the unsettling story of her harrowing childhood, beginning at the age of three.

Beware of Too Much, Too Soon

Even when you’ve got an opening scene that either sets up, foreshadows, or introduces your big story idea, that scene can still fail to capture the reader’s attention. One of the main reasons so many opening scenes fail is because the writer tries to tell too much about the story too soon.

Tell is the critical word here. The writer is telling—rather than showing—us the story. Many scenes are overburdened with backstory, description, and the characters’ inner monologue, which leaves little room for the action that should be driving the story forward.

Remember: What the readers need to know to read the story is not what you needed to know to write it. Because the beginning is usually the first part of the story that you commit to paper, you are just getting to know your characters, setting, plot, and themes. You’re exploring your characters’ voices and histories, your setting’s idiosyncrasies, your plot’s twists and turns and detours and dead ends, your themes’ nuances and expressions. You’re thinking on paper, stretching your way into your story, and that stretching is a critical part of the writing process, but just as stretching before you run is paramount, it’s not part of the run itself. It’s preparation.

So you need to go through and trim the parts of your opening that are obscuring the action so you can get to your big story idea sooner. You need to prune back your writing so that the inherent drama of your story idea is highlighted.

If you’re finding it difficult to edit your work, then try this trick. Print out your opening pages, and go through them, marking up the text in different colors to distinguish between backstory, description, and inner monologue.

I know that you’re tempted to skip this exercise. But don’t. You only have to flip or scroll through it to know where you should edit your opening scene. This is one of the most useful exercises you’ll ever do and the one my students, clients, and writing friends always most applaud me for.

For many writers, their story’s warm up lasts about fifty pages (or around the 15,000-word mark). That’s why I say to writers whose openings are slow, boring, obtuse, or otherwise unengaging: What happens on page fifty of your story? 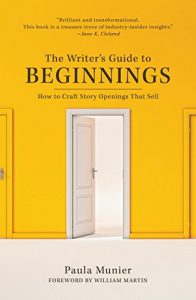 Page fifty is where many stories truly begin. Turn to page fifty in your story, and see what’s happening there. What’s your protagonist up to? How does that relate to your story idea? Don’t be surprised if this is where your story really begins. And don’t be reluctant to toss out those first forty-nine pages of stretching if that’s what it takes to get your run off to a good start.

If you enjoyed this post, I highly recommend The Writer’s Guide to Beginnings by Paula Munier.

Paula Munier is a senior literary agent and content strategist at Talcott Notch Literary Services. She began her career as a journalist and along the way added editor, acquisitions specialist, digital-content manager, and publishing executive to her repertoire. Paula has penned countless news stories, articles, essays, collateral, and blogs, as well as authored/co-authored more than a dozen books, including Plot Perfect from Writer’s Digest Books.