If you are writing a series, secondary characters are critical to its success. That’s a big statement, but I’m going to try and back it up.

I try to determine the next leading man or lady in a series all the time. When I was gorging on Nalini Singh’s Psy Changeling series (which is up to book seventeen at the moment), I became obsessed with trying to figure out which secondary character would be next. I couldn’t click the buy button fast enough. She also had me wait a long time for one of my favorite couples, but I was determined to read each book in order and get there in a natural way.

You must be skillful in sketching out your supporting characters. They must be interesting, but not so interesting that they overshadow the main storyline. Sawyer Wells, a secondary character in my novel The Marriage Mistake, became a bit too big for his britches. Suddenly, I was writing him into every scene, until I remembered whose book it was. I quickly backed up, deleted some of his starring roles, and when he threw a tantrum, I promised him his own book.

He agreed and stepped back gracefully.

But even characters you never think of as leading men or women can surprise you. In Christina Lauren’s The Wild Seasons series, a secondary character called Not Joe became so popular, the authors decided to write an exclusive story featuring him entitled, “A Not-Joe Not-So-Short Shorts,” which was only available in the book Wicked Sexy Liar at Target. Readers hunted down the book in order to snag this special short, showing how secondary characters can boost a series and also create amazing marketing power.

In Searching for Perfect, I wrote about a nerdy aerospace engineer whose older brother, Connor, taught him all the wrong things about women. He was awful and chauvinistic. Connor was the antihero of any romance book. Even my editor sighed when she read the book, and told me Connor would never have his own story.

That was okay, because I had no intention to continue his tale.

Until my readers began e-mailing me in droves, asking for Connor’s story. I was stunned. Why would they want to read about him? I made him unappealing! He had no story to tell! I went along, writing my other books, until I realized Connor had dug into my brain and offered me a challenge. Could I transform this antihero into a romance hero? Was it even possible?

I took the challenge and wrote his story, Searching for Mine.

It was one of the most satisfying books I’ve ever written, because I had to reach deep to find all the good stuff, and it challenged me as a writer. It ended up being an emotional story that readers really loved.

Give secondary characters a secret

In my Searching For series, which features twins, I made Isabella the bad girl. She wreaked havoc on characters, and my readers weren’t too sympathetic. But they still begged for her story, because she was intriguing. When I finally wrote Searching for Disaster, I challenged myself by taking Isabella out of the depths of drug addiction and into the starring role of her own love story.

Perfection doesn’t exist. If you are writing a perfect secondary character, make sure you surprise the reader with what lurks beneath that perfect surface. The junk is what makes a secondary character—really, all characters—interesting, and inspires the reader to try to figure out what can come next. You want readers to buy the next book.

Invoking sympathy is another great tool for readers to bond with secondary characters. In Susan Elizabeth Phillips’ book Breathing Room, Tracy is the hero’s ex-wife who moves in with him in Italy. The situation is precarious, and most readers won’t take kindly to embracing the hero’s ex in a romance novel, but Phillips makes it work brilliantly by evoking sympathy. Tracy is pregnant and struggling to save her marriage. She’s desperately in love with her husband who doesn’t want the baby. Here’s a sample:

Who are you? she wanted to ask. Where is the sweet, tender man I fell in love with?

… “You shouldn’t have come here,” she said when they were gone.

He finally looked at her, but his eyes were as cold as a stranger’s. “You didn’t leave me any choice.”

This was the man she’d shared her life with, the man she’d believed would always love her. They used to stay in bed all weekend, talking and making love. She remembered the joy they’d shared when Jeremy and the girls were born. She remembered the family outings, the holidays, the laughter, the quiet times. Then she’d gotten pregnant with Connor, and things had begun to change. But even though Harry hadn’t wanted more children, he’d still fallen in love with their youngest son the moment he’d slipped from her body. At first she’d been certain he’d fall in love with this one, too. Now she knew different.

Immediately, I am transfixed with Tracy’s problem and am rooting for her. This was a daring way to create a secondary couple, but it works to strengthen the entire story arc.

Because series are a huge part of the market now, when creating the first book, make sure you sketch out who will appear in your follow-ups. Yes, there are always surprises, but you should know there will be either three, four, or more characters planned in the series. Give the reader a hint of what’s to come, tease them with ideas of the hero or heroine’s match, and firmly keep all your secrets in your back pocket until they shine in their own book.

With my Billionaire Builders series, I sketched out three estranged brothers, planning to give them each their own book. I also planted a lot in the first book, paving the way for their individual stories, while leaving room for surprises along the way. For instance, after the death of their father, the brothers are brought together to run the family business—a customized building company. Each of them experienced betrayal at the hand of another, and now they need to face the past and try to heal in order to save the company. I incorporate the sibling conflict with the mystery surrounding their mother’s death, which is not fully solved until the final book. This keeps pulling the reader forward to discover the secret.

I also created a secondary character who had a previous relationship with one of the brothers. I hint at their conflicted past, but when her daughter is written into the story, I realized my final book will reveal the real father. Once again, this pulls readers into the next book in the series. 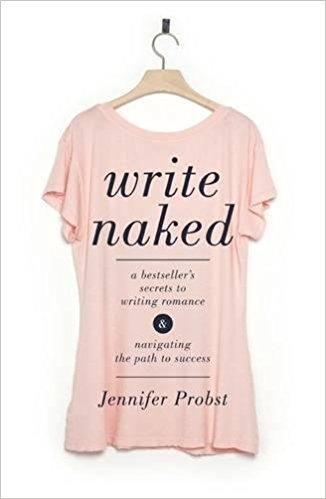 Surprises lurk at every turn, though. My surprise came when a young, sassy female walked into book two, and I realized she’d eventually need her own story. This would bring the series to at least four books. I hadn’t planned for that, but I left room for the unexpected. The novella will be released this year, and hopefully bump up sales for the final book.

If you enjoyed this post, be sure to check out Write Naked by Jennifer Probst.