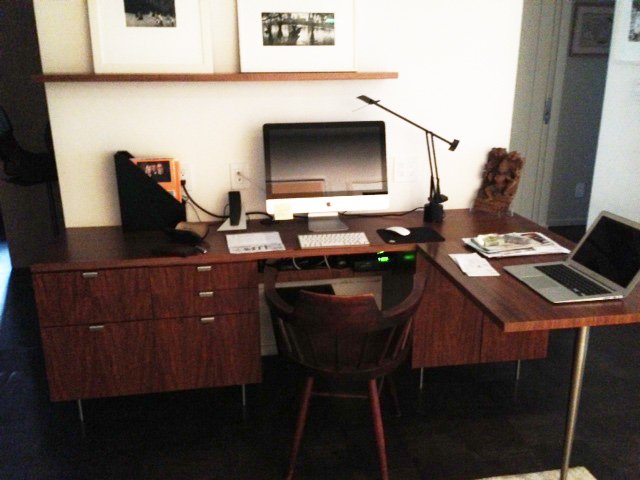 The workspace of Frances Kazan

For years I was a disciplined writer. After walking the dog, I was seated at my desk by 9 a.m. After 500 words I’d go downstairs for lunch, followed closely by the dog. Sometimes my husband joined us, and sometimes he didn’t. Like me, he was a writer; his office was on the floor above mine. Around 2 p.m. I would return to edit, then I took off for either a yoga class or a walk in the park. Following this routine, I finished a master’s thesis (later published), a historical novel, Halide’s Gift, numerous articles for Cornucopia magazine, several lectures, and the first draft of another novel, The Dervish.

I used to work in the writers room at the local library. When that became too crowded, I put a desk in the corner of our bedroom, not a satisfactory arrangement. For a while I returned to the library of the university where I earned my degree, as an older (wiser) student, but the commute consumed precious time. Then my son graduated, his bedroom became my office, its windows overlooking the gardens at the back of the house. I used to gaze out at the plane trees and ivy-covered walls through a line of Grateful Dead stickers.

I was blessed. I had my own private space, where the silence was broken only by the thud of my husband’s typewriter, and the dog snoring on the sofa. I loved being alone with my thoughts and my work, absorbed by the flow of writing, oblivious to the passage of time.

Time and change are unavoidable; gradually my husband’s health declined. The two of us continued to work during that last hot summer, then, three weeks after his birthday, he died. In defiance of this truth I kept writing, clinging to my routine to maintain the appearance of normality, but the silence overhead became a crashing noise.

Dealing with the practicalities was overwhelming. First the execution of the will, then going though his papers stored in a room full of filing cabinets. Our house, too big for one person, had to be sold. The task of making it “market ready” consumed me. Eventually I moved out of our home of 20 years, taking the dog and my husband’s cat, forcibly pried from his study.

My writing routine collapsed. The manuscript of The Dervish languished in a drawer. Then 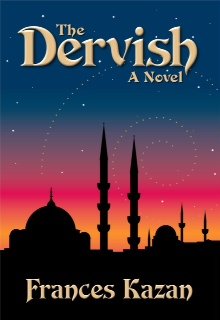 disaster: my dog was diagnosed with incurable blood cancer.

For several years I did not write another word. I traveled, found a new home, created a new life. One day generous friends loaned me their yali in Istanbul, where, in a room facing the Bosphorus, I returned to my manuscript. It wasn’t easy at first, thoughts were hard to organize, the right word was elusive. Eventually my routine was restored.

So here I sit at a new desk, in a new apartment, in another neighborhood, writing a blog to publicize the e-book edition. The Dervish has been published, a real book I can hold in my hand. Close by, my husband’s cat is asleep on the sofa, she’s frail, her gait is unsteady. I’ve lost track of her age.

English-born Frances Kazan is a writer, lecturer, producer and arts supporter. Her latest novel is The Dervish.