I am thrilled to introduce a new weekly feature, Writing on the Ether, by former CNN journalist Porter Anderson. Writing on the Ether will round up some of the best and timeliest articles related to writing and publishing that you don’t want to miss.

Porter has been well-known to me since 2010 as one of the most dedicated Twitter feeders of great online articles for writers. When he began introducing me to fabulous stuff I had never seen, I knew he deserved a dedicated column. So here he is! (For those paying attention, this feature takes the place of my old series, Best Tweets for Writers.)

This week’s how-to and how-not-to

“An ‘authentic following’ comes down to this: Twitter doesn’t work without followers who actually read your tweets.”

The harkening and who knew?

“There’s a cool ‘read aloud’ feature on the device that allows the Kindle to read to me.”

—Elizabeth S. Craig on listening to her character dialogue: Writing to Read Aloud

The horrors and the hand-wringing

“Failure to pay attention to what we can control as authors, and what we can’t, leads to a form of cargo-cult neuroses in writers.”

The headstrong and the honest

“All writers, whether they’re among the fortunate ones who have a publisher pushing them or whether they’re trying to do it themselves, should be grateful that publishers are doing their damnedest to maintain prices and the perception of value for writers’ work.”

—Mike Shatzkin, in a crystal clear argument:
Writers Who Oppose Agency Pricing Aren’t Acting in Their Own Self-Interest

The heartfelt and the hawking

—John Vorhaus, in a bravely forthright, intelligent meditation:
I Think My Model Is Breaking Down

The hunker-down I want more of

“I’m learning from you guys. The trend surprises me: most of you seem willing to take snark, condescension and find something useful in it.” 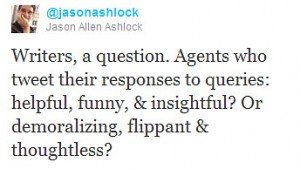 Ashlock was leading an impromptu chat with writers and some agents—about literary agents’ Twitter patterns. Strictly in general terms. No names. In any business, tweeting on your professional account involves the potential both for prudent communication and for other things. On Monday evening, the term “snark” probably would have dominated a word cloud from the chat. But Ashlock is a gentleman.

“Let’s commit to steering our community’s conversations toward the productive and instructive,” he tweeted. “I’m … pretty impressed with the unflappable spirits & undaunted efforts of these writers.”

I think we could benefit from hearing more on this topic, in the constructive context Ashlock brought to the table. Are there any author-clients who have been surprised at the tone and substance of their agents’ tweets? And are there agents who’d like me to just get on to the next item? OK, I will.

“I worry about the day pilots decide they’ve got pilots’ block and planes start dropping out of the sky. Try telling your boss you’ve got ‘day-job block’ and see where that gets you.”

The huh?—what was this “publishing” thing, again?

And the hype for which he has hankered

“Timothy Ferriss’ first book, The 4-Hour Workweek, was turned down by twenty-six publishers before being accepted by Crown … it’s easy to understand the caution of those twenty-six.”

This is a long, deep New Yorker (Sept. 5 issue) weekend read to bookmark. Watch for Mead’s mightiest moment: “Every generation gets the self-help guru that it deserves.”