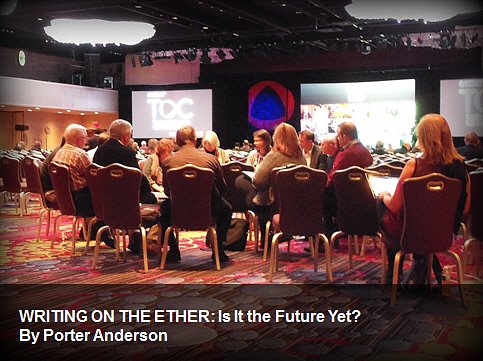 I like the image I’ve chosen for the lead here today on the Ether because that small circle of associates is an impromptu, off-schedule gathering. It’s a ring of a dozen or so colleagues in a sea of 1,200 seats, maybe more, in the Broadway Ballroom complex at New York’s Marriott Marquis between major plenary sequences of keynotes at O’Reilly’s Tools of Change for Publishing Conference (TOC), ending today.

Note: Again today (Thursday, February 14), the keynotes are being streamed live by the incredible O’Reilly team, you can watch them free on the conference’s main page. They run today from 1:10pET / 1810 GMT to about 3pET / 2000 GMT.

I don’t quite scoff at the heavy emphasis we have on “community” these days, but I come close at times. I’m very solitary by nature, I think many writers are.

I’m not always sure that this drive for community isn’t a dodge, a socially endorsed way to avoid doing the lonely work of writing. I tease Dan Blank mercilessly for promoting all this “sharing” everyone is supposed to do so eagerly, and most experiences of community make me less, not more, communal.

Voice, connection & relationships matter. RT @v_clayssen: You can not compete on the internet with just content. #TOCcon @javiercelaya

But the urge to band together during the disruption, displacement, dyspepsia, and disarray of the digital dynamic is certainly something others feel. And this small group in that cavern of a room struck me as emblematic of the trend.

O’Reilly Media and Tools of Change founder Tim O’Reilly said in his own, brief and stimulating keynote on Wednesday that we’ve become less afraid of the future. I hope he’s right.

I found myself wishing the future-ish keynotes at the end of the day had been longer. Giving Evan Williams five minutes to demo his latest, Medium, amid a fast parade of talkers kept everybody onstage jogging and most of us in our seats dizzy.

But when it was possible to follow the fast-bouncing ball, you could her some very cogent comments from author and futurist Douglas Rushkoff—who gave us Cyberia when we thought it was a fad.

And one of the themes running through this community-cheering conference is text. As in not going away. As spacey as things may be getting, it seems, we’re hearing a lot of folks on various stages talk “about the words” and about it all being “about the words.”

They don’t mention the accountability part as frequently. A mere oversight, I’m sure.

Gotta say, I've seen about 25 speakers over the last 2 days and only 3 of them were women. #toccon

But because we’re still in mid-conference as I write this, I’m going to take the unusual step of shortening the Ether this week. I’d like to see some more work done on what we’re seeing and hearing—in articles by our colleagues, I mean—before jumping to too many conclusions for which I should be held accountable.

TOC is nothing if not overwhelming each year, and for the best reasons. Joe Wikert and Kat Meyer have outdone themselves this year, starting with our superb first outing of Author (R)evolution Day with co-chair Kristen McLean of WriterCube and keeping up a torrid pace—those flying futurists!—right through the week.

I have a separate Extra Ether for you on “#ARDay,” as we hashed it: A Good Day for the (R)evo­lu­tion. I’m really proud of that event, as I told Wikert at breakfast yesterday. Really proud, and very grateful to all who came, followed from afar, and, especially, those who spoke.

And here’s a piece on Bowker’s rollout of a new author service that combines the acquisition of ISBNs for your books with a format-conversion capability, in case you’re shopping for such: Bowker’s 1-Stop eBook Con­ver­sion Service

And now a shout-down to the DOJ from the ABA. #TOCcon

I’ve got an Epilogger running on our hashtags #TOCcon and #ARDay here. As I write this, it’s nearing 12,000 tweets and we still have this final day ahead of us.

As soon as we’re done, I’m on a flight to London for the Foyles Bookshop of the Future workshop Friday (the second of two such workshops they’re doing, hashtagged #futurefoyles).

So more to come. More text. More accountability, Mr. Rushkoff.
Click to comment
Back to Table of Contents

CNET coverage of our launch and first book! A startup takes on publishing #NextSteveJobs http://t.co/ySA4NM2N #TOCCON

Books: Reading on the Ether/h1> 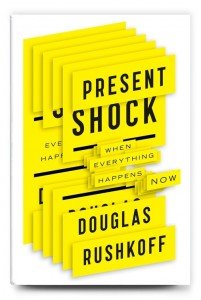 Of special interest this week, Douglas Rushkoff’s new Present Shock, about which he talked at Tools of Change this week.

The book is, Rushkoff told us, “about the human reaction to living in a real-time…post-linear reality.”

And of ironic importance to authors: “We get into trouble when we choose the wrong forms. You shouldn’t sweat six months on a tweet.”

As each week, the books you see below have been referenced recently in Writing on the Ether, Ether for Authors, or in my tweets.

I’m bringing them together in one spot each week, to help you recall and locate them, not as an endorsement. And we lead our list weekly with our Writing on the Ether Sponsors, in gratitude for their support.

Writing on the Ether Sponsors

Conferences of the Future

As usual, please let me know of conferences you’d like me to consider listing though my contact page. And for more about these, see my site’s page on publishing conferences.

Happy Valentine's Day! Day3 #TOCcon with @dslessing @ftoolan @jtallent Everyone have a great day and come say hello to us on the 6th floor.

Last day today, February 14 New York City (again at Marriot Marquis Times Square) O’Reilly Media’s Tools of Change for Publishing Conference: “Every February, the publishing industry gathers at the O’Reilly Tools of Change for Publishing Conference (TOC) to explore the forces that are transforming publishing and focus on solutions to the most critical issues facing the publishing world. TOC sells out every year—don’t miss its potent mix of fabulous people and invaluable information.” Under the direction of Joe Wikert and Kat Meyer.

"How to Change the Future" off the cuff talk at #TOCcon about the future, SF, steampunk and meeting Pres. Clinton http://t.co/Tgde44KP 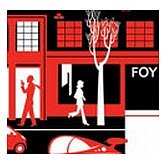 February 11 and 15 London Foyles and The Bookseller Re-Imagine the Bookshop: In this invitational workshop, “Foyles has partnered with The Bookseller to invite customers and industry experts to help design a new flagship Foyles bookshop on Charing Cross Road for the 21st century with architects Lifschutz Davidson Sandilands…Participants will be asked to engage with issues such as declining physical book sales; the place of ebooks; the cultural importance of bookshops and author events; the specialist knowledge of booksellers; and how bookshops can provide customers with a place to buy books, however they decide to read them.”

February 19-21 Indie ReCon online: “IndieReCon is a free, online conference…designed to help any writer or author who is curious about the ins and outs of indie publishing. You’ll find everything from the pros and cons of indie publishing, essential aspects in creating a high-quality book, successful online marketing, and expanding into international markets…We will feature more than 30 guests, including…Darcy Chan, CJ Lyons, Bob Mayer, Hugh Howey, M. Leighton, and Samantha Young.”

Teicher sounds like he's testifying before a Congressional hearing. In 2001. #TOCcon

March 6-9 Boston AWP, the Association of Writers and Writing Programs AWP last year drew 10,000 attendees to icy Chicago (it looked like 40,000 attendees when everybody’s coats were on), and, per its copy on the site this year, AWP “typically features 550 readings, lectures, panel discussions, and forums, as well as hundreds of book signings, receptions, dances, and informal gatherings.” The labyrinthine book fair is said to have featured some 600 exhibitors last year. The program is a service-organization event of campus departments, hence the many (many) readings by faculty members and a frequently less-than-industry-ready approach that worries some of us about real-world training the students may be missing.

#TOCcon "if #publishers don't invest in #technology related to their industry, then financial community won't either" ~Javier Celaya

Publishers need to take on an entrepreneurial mindset #javiercelaya #toccon.

May 3-5 Boston The Muse & the Marketplace 2013 is a production of Eve Bridburg’s fast-rising non-profit Grub Street program. It’s material reads tells us that organizers plan more than “110 craft and publishing sessions led by top-notch authors, editors, agents and publicists from around the country. The Manuscript Mart, the very popular and effective one-on-one manuscript reviews with agents and editors, will also span 3 days. We expect nearly 800 writers and publishing professionals to attend, while maintaining the conference’s wonderfully intimate, ‘grubby’ energy that we love.”