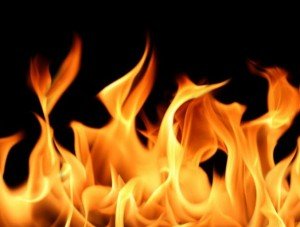 C’mon baby, light my Kindle Fire. And watch out for sparks from certain NOOKs in crannied marketplaces. Beware bald guys bearing 3Gifts. Silk, Bezosense, and smell that? It’s the lighter fluid of Android aspirationals yearning to be treed like iPads for Christmas. It’s beginning to look a lot like Amazon.

“One after another, like moths to a flame, technology companies have been seduced into entering the market for tablets…A competition between Amazon and Apple tablets will be a battle that pits the company that created the first popular e-reader (and set off a still-unfolding revolution in how books are consumed) against the company that created the first popular tablet (and set off a revolution in progress about how entertainment and other media are consumed).”

“Bezos made the following claim: “From Kindle, Fire is born.” At the risk of extending this analogy too far, Bezos is now frantically fanning a brush-fire that looks like it might burn up its competitors and put publishers at risk of third-degree burns.”

“B&N is going to be feeling the heat as these are compelling e-ink reader prices (per Mashable their stock dropped 9% after Amazon’s announcement), Apple is going to be feeling some pressure as there is finally a viable device that undercuts the iPad on price, and having now crossed that magical sub-$100 price point, methinks this is going to be a huge holiday season for e-readers.”

“Clearly, Amazon’s just-announced Kindle Fire isn’t designed to compete head-to-head with the iPad 2 on specs alone, but that doesn’t mean consumers won’t be cross-shopping the two this holiday season.”

—Chris Ziegler‘s Amazon Kindle Fire vs. iPad vs. Nook Color: by the numbers

“Amazon Silk acts as an intermediary between your mobile device (the Kindle Fire) and the Internet at large. As you make a request—go to TheAwl.com—Silk jumps in and distributes the workload of finding, downloading, and presenting that information on the device.”

—Alexis Madrigal asks Will Amazon Silk Actually Be Better Than Other Web Browsers?

After Fire comes the iceberg

“A year ago, Robert Gottleib of Trident Media announced that agents shouldn’t become publishers.  This week he announced that Trident Media was opening Trident E-Book operations. Which will help Trident’s authors self-publish. … I suggested the radical concept, a while back, of publishers granting the authors the rights to backlist in return for reverse royalties of 25%. What this means is the author gets to do what they want with the titles, but on what they earn, they pay the publisher a royalty of 25% for that.”

“Today I will add another urgent suggestion to general trade publishers: reconsider your commitments to publish illustrated books in any time frame more extended than a year or two and think about sticking to straight text, unless you have paths to the customers for those books that do not go through bookstores. If we do end up in an 80% ebook world anytime soon, and we very well might, you’ll want to own the content you know works (for the consumer) in that format, not what you don’t know works any way other than in print.”

—Mike Shatzkin, our weekly Ether Elder, takes stock at
Four years into the ebook revolution: things we know and things we don’t know

Mike Shatzkin and Michael Cader organized a Publishers Launch one-day conference in New York this week, Ebooks for Everyone Else. Its hashtag was #plcny and its Twitterati were busy.

“According to the Association of American Publishers, total gross sales for all books in 2010, as reported by 87 publishers, were about $15.6 billion, an increase of around 2.7 percent over 2009. CD audiobooks represented $189.7 million of that total, a drop of 11 percent. But the increase in download sales to $81.9 million was a boost of 38.8 percent, reflecting the shift toward digital audio, a trend that from all accounts has continued in 2011.”

—Peter Osnos is listening for The Coming Audiobooks Boom

“So how many bestsellers have been rejected by reputable agents? Probably something like, all of them. How many agents have rejected books that went on to become bestsellers? Probably a quite a few. Do we ever kick ourselves over it? Maybe sometimes, but mostly we just keep moving.”

—Rachelle Gardner on the move in Missing Out on a Bestseller

“My bias toward late starters—people who have lived a whole life, or two, or three before seriously devoting themselves to write a book—relates to the collision of life and art; I’m interested in writers who perhaps had the inkling, or the deep desire, to write, to pursue a creative life, for a long time, but for myriad reasons were impeded—internally, externally, a combination of the two. ”

—Sonya Chung announces a new feature at The Millions on
Post-40 Bloomers: “Late” According to Whom?

“The biggest problem, according to librarian Buffy Hamilton, author of the Unquiet Librarian blog, is DRM. Digital Rights Management is what restricts content from being shared across devices. It means that e-books from Amazon can’t be read on Nooks, and e-books from Barnes & Noble won’t work on Kindles. It means, oftentimes, that kids can’t bring their own devices from home to use for library check-outs.”

“There were hidden dangers that made no sense, like the producer who wanted to see “more stuff” in the script but couldn’t define what that meant. Occasionally things got really murky, like when one producer told me one thing and his partner then completely contradicted him. No one saw that as a problem.

” I often see the most weakness in authors’ key selling points; some people have a hard time getting past “Buy my book!” You’ll have to be more imaginative than that to catch a stranger’s attention!”

“Like Victoria with her cherished but too-detailed lady, I examine whether the ruffles are telling details or discardable darlings. Whether the sensually rippled leather gloves are too distracting. And what I need to make each adapted part fit seamlessly together. If you do this stage of the editing right, every letter of your prose works as hard as it can.”

—Roz Morris riffs on Victoria Mixon’s design parable in
The power of suggestion—what can you leave the reader to fill in?

“At its core, social media is really the art of the tease.  It’s all about clever headlines and good timing. Sure, you could walk out on stage shouting into a megaphone about how great you are. But if you take off a single glove in just the right way, you might find a lot more people sticking around for the rest of the show. ”

—Iris Blasi in Social Media: The Art of the Nudge
(Blasi’s full article will be available soon; we’ll nudge you when it has a home)

“When a website has a midlife crisis, it doesn’t buy a Porsche. It tries to become TV … There’s a point where a site steps away from writing to such an extent that they leave that space entirely vacant—waiting for another site to occupy it. The Awl follows Gawker, perhaps, or G+ follows Facebook? Not sure those are the right analogies, but I do know that when sites cross over into that place where writing is instrumental and incidental, I stay behind and probably always will.”

—Jim Hanas tunes in to The Gawkerization of Facebook

“If Twitter hopes to grow at the pace of Facebook, it will have to figure out how to stop thinking in @ symbols, and start thinking like my sister.”

“The Internet is changing the economics of attention by fostering peer-to-peer interactions. People used to pay attention to those around them and to ‘stars.’ Now, they spend lots of time online paying attention to people they haven’t met. And, increasingly, individuals go online to get attention, not to give it.”

—Esther Dyson writes that online, Attention Must Be Paid

“Our computers drive your car better than you do when you’re drunk,” Mr. Schmidt said.

“Or when you’re 16 or when you’re old,” Mr. Page said. “You’ll get a software update and your car will be safe, which is great.”

T-shaped ad people in their  “circle of momentum”

“You have to live in beta, constantly evolving and staying flexible enough to solve whatever challenges are front and center. But beyond that you need new teams of T-shaped people: folks who have a deep expertise but can think and interact across disciplines. … To win takes talent. Talent only comes if there are opportunities for great work. Opportunities come from clients. Attracting them calls for visibility and evidence of what you can do. That only results from work itself. Which, of course, requires talent. This is the circle of momentum. It needs jolts of energy at all five key points.”

“Only one-quarter of those surveyed say news orgs get the facts right, a new low since 1985 when the question was first asked. Two-thirds (66 percent) say stories are often inaccurate, a new high. And nearly three-quarters of Americans believe that journalists try to cover up their mistakes, rather than admit them.”

Both pluses and minuses are in the nature of things

“It’s possible to admire Mr. Greenblatt’s book while wishing it contained more of the boldness and weirdness he admires in Lucretius. Mr. Greenblatt’s prose, charted on a Geiger counter, would register mostly a state-of-the-art air-conditioner’s steady hum. I found myself longing for a few more unsettling spikes of intellect and feeling. You won’t be bored by ‘The Swerve’; neither will you be on the edge of your seat.”

—Dwight Garner reviews Stephen Greenblatt’s “The Swerve: How the World Became Modern” in:
An Unearthed Treasure That Changed Things