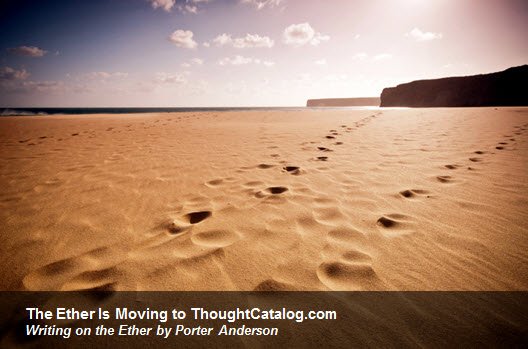 “When the industry looks out of the window”

When the industry! the industry! stops the internal debate and looks out of the window, it will realise who will make or break them: the customer.

I’m not sure it was 134 Ethers ago exactly. But not long after I gratefully began piling onto Jane Friedman’s site here each week with Writing on the Ether, I started using the industry! the industry! to refer to folks whose interest in the digital disruption seemed to be more about the business than the books.

And, as Chalmers’ Book Industry Too Busy Playing With the Wrapping Paper at Digital Book World’s Expert Publishing Blog indicates, there are a lot of people still obsessed with…the industry! the industry!

Ironically, many of those folks are the same ones who are having to hustle to meet the readers.

Granted, Mike Shatzkin has assured us this week that It is not news to publishers that they have to engage directly with their readers.

This is good to hear. Also, interesting that at this late date, Shatzkin finds he must headline a piece so, isn’t it? Perceptions are so much of the game.

The UK’s Chalmers is the founding managing director of IPR License, an international literary-rights-licensing platform. He’s been making interesting noises at The Bookseller’s The FutureBook bloggery for some time, as well as at Frankfurt Book Fair’s Publishing Perspectives, home to Issues on the Ether and our weekly associated #EtherIssue weekly live tweeterie.

In this latest essay at DBW, Chalmers turns up just in time to help me explain to you what I’m doing with the Ether. And he says it several useful ways.

For example, there’s the generational concept:

And then there’s the process-protection element (“we’ve always done it this way”), emphasis mine:

If we spent less time bothered about the wrapping paper, we would have more resource and focus on finding and nurturing the best new work. In publishing, we fill slots. In the other creative industries, fashion for instance, buyers look to create new trends themselves, often creating from scratch, rather than trying to follow them. First is everything.

And, there’s this forceful outward understanding from a man who daily sees the vast breadth of the international trade markets and the sheer power of digital’s ability to array your content across them:

When it comes to finding the best quality new work, we are far too limited in where we search. Same territories, same agents, same old story. There are brilliant books, so diverse it’s impossible to even find an analogy, being published all over the world, infused with the culture they are written in but also ready to be embraced by an enraptured worldwide audience.

No matter how many times Jane or I may talk to you here online or in conference settings or over coffee, you can hardly find a better example of what we mean when we say “networking” than the Ether.

Jane and I met online. On Twitter. We’re that story. We met en réalité at a Writer’s Digest Conference, back when men were men and women went to conferences. (Such a better gender balance at conferences now, I cannot tell you, it’s great.) We found ourselves quickly on the “confab bus,” seeing each other at these events.

I was discovering (this was in 2011) the need for the live coverage I do now as a service of my consultancy, Porter Anderson Media, from many conferences in many countries. I was learning that I could adapt one of my former CNN.com control-room activities to the needs of the publishing world for quick exchanges of ideas and commentary. Jane was formulating beautifully targeted and insightful understandings of the author’s presence online.

Jane’s invitation to me to create what would become the Ether here on her pages was a direct outcome of our having met, cultivated, and committed to what has become one of the great friendships and collegial events of my career. If you think that Twitter and the other social media—still a plural word, damn it, one medium, two media—are simple billboards on which you’re to plaster your sales pitches to your publishing buddies, you’re wrong and way late in getting right.

And while I’m now moving this gathered effluvium called the Ether to a new, the truth of digital is that I’m not going anywhere. (And you thought you were getting rid of me. Ha!)

Jane and I will continue to work together on many projects. Frankly, I don’t know how she’ll get along without my maddening cries for help with some utterly ridiculous WordPress conundrum at 2 in the morning. I like to reserve my most catastrophic online errors for the wee hours to heighten the rawness of the alarm.

She is the Jane Friedman, by the way. Don’t miss her interview with that lovely pretender to the name, Jane Friedman, in the new issue of her and Manjula Martin’s superb new Scratch Magazine. And subscribe to that thing, don’t make me have to send out the Ether stationwagon to pick you up.

As I shove off here for new terrain, I lift my Campari to the Ether-eal Jane Friedman, with profound appreciation for her energy, support and networking diligence. She is the best thing to happen to a lot of us in publishing.

Do you know ThoughtCatalog?

Launched in February 2010, ThoughtCatalog.com, a property of Thought.Is, is not—and this is the point—a publishing-industry medium. It’s known, not without controversy, as a hub of self-expression for writers whose perspective and purview skew quite young.

Some of today’s headlines at Thought Catalog are:

And This is Why It’s So Hard To Get Published (And It’s Not Amazon’s Fault) by Lucy Leiderman.

And The 10 Worst Boyfriends In High School Literature by Ella Ceron.

And What To Do When You Fail: How I Handled Blatantly Losing the Amazon Breakthrough Novel Award Contest by Abby Rosmarin. 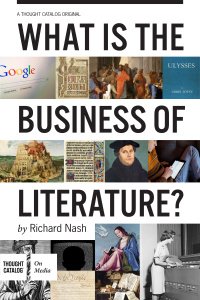 One of them is our ingenious friend Richard Nash’s superb What Is the Business of Literature? as a single.  You might remember reading the essay at Jane’s Virginia Quarterly Review? Now, it’s yours as an ebook. (And the price is awfully reasonable.)

Thought Catalog is the creation of Chris Lavergne, one of the most interesting of the wunderkind entrepreneurs, a guy whose compass looks set resolutely on developing cultural journalism in a way he refers to as “both conscious and natural.”

That’s how he explained it in an interview with Matthew Newton for Forbes, Thought Catalog and the New Age of Confessional Media.

And in the two years since that interview came out, Thought Catalog has grown to rank frequently among the top 50 or 60 Web sites in the world in traffic. It’s consistently tracked by Quantcast as larger than CNN.com, TheGrauniad.com (typo intended), Time.com, and Gawker.com. It’s right in there, traffic-wise, with the New York Times, USMagazine.com, Apple.com.

This is many eyeballs. Reading eyeballs. And that’s the point.

At one point, Lavergne and I went over procedural details, as you do when settling in at a new medium. His site’s clean, elegantly text-driven design is busied up daily with a level of international advertising that would make a lot corporate suits cry. But he doesn’t lose sight of what means the most to him in this work: these voices in their astonishing variety, the writing.

I told him that for a writer, that emphasis makes moving the Ether to Thought Catalog feel like coming home.

And I want to take a moment here to say my special thanks to a genuine friend and clear-eyed associate, Jason Allen Ashlock, a consultant’s consultant.

In Brian O’Leary’s essay for The FutureBook, Publishing has entered a new and different era, O’Leary captured the structural adjustments rocking that doubly wailing industry that once seemed so stable:

The internet shifts traditional publishing from a gatekeeping role, deciding what will be published, to a truer form of curation: managing the communities and conversations that may ultimately inform a rendered component.

O’Leary asks us to get past “debating the future of our prevailing supply chain” and to consider what it means when “readers look to customize their own content consumption…Boundarries between ‘types’ of publishing will blur,” he writes, challenging “the notion of what a book is and can be.”

We must be about that business.

Having chewed each other’s legs off for so long, it’s time for the publishing community in its digital dance to face outward, turn to the audience, look them in the eyes. Because if we do it only for each other—for the industry! the industry!—then we’ve forgotten the mission. It never was for each other. Literature is for the world at large. It belongs to them. What we do belongs to them. In some way, we belong to them.

It might be a good idea to fill them in on it now, you think?

Dont worry. You escape nothing.

And you can always check up on me at PorterAndersonMedia.com.

Chalmers talks of getting out into the world to find the writings we need now:

Take Haruki Murakami…was a small-city man living in southern Japan and now is read all over the globe, regularly described as the world’s greatest living writer. Let’s widen our search, as we are now technically capable of doing, and find many more writers of Murakami’s brilliance.

I think the journalist’s job in all this is to talk to both sides of that widening search. I couldn’t be more excited about the chance to hear what comes back when we ping the wider world. And I expect every one of you Ethernauts to be suited up with us as we go deeper into the digital dare: I’ve got a feeling we like these people.

There’s not enough bourbon in the world, Jane. Thank you.

Stop saying you're "reaching out" to me like it's some noble gesture. It's just an email for Pete's sake.

It’s designed as a working base of operation for the exclusive use of its 160 members. And we’d love you to grab a space alongside our charter headliners in BookExpo America’s all-new uPublishU Author Hub for entrepreneurial authors: Bella Andre, Barbara Freethy, Hugh Howey, CJ Lyons and H.M. Ward.

Network with these writers and other publishing players on the trade show floor.

For info and registration, contact Fred Evanko: 203-840-5965 or fevanko@reedexpo.com