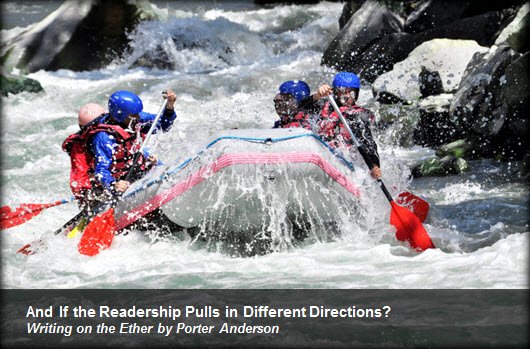 Wait a Minute. Where Are We Going? 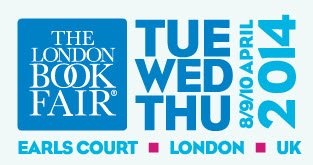 The sort of spunk he’s just shown this week makes it all the cooler that he’s going to be on London Book Fair’s Great Debate lineup on April 8 (11a-12:30p, Earls Court, Conference Centre Rooms 1 and 2). He’ll be joined by Ken Brooks of SVP Global Supply; Faber & Faber’s Stephen Page; Diversion Books’ Scott Waxlman Copyright Clearance Center’s Michael Healy, and chair Susan Danziger of Ziggeo—all of them bent on sorting out the proposition:

This is one of my favorite LBF events, and you’ll be most welcome, of course, to follow hashtag #LBF14 if  you’re not able to join us in person.

Not quite the opener you expect from one of our senior statesmen of the regime, is it? Especially the fastidious Shatzkin, who could fisk the Protestant Reformation in 48 seconds flat, don’t tempt him.

But, lo, here it is. In Sometimes one more calculation can make what looked first like revolution resemble what it really is: evolution. (Mike’s headlines alone are worth the read.)

We’re not going to spend much time on this particular post since, as Shatzkin tells us, it was actually based in a misreading of Smashwords‘ Mark Coker’s much-discussed Huffington Post listicle e recitativo,  10 Reasons Self Published Authors Will Capture 50 Percent of the Ebook Market by 2020.

But the first point here to be made is that Shatzkin did the responsible thing, and it’s an object lesson for the many bloggers I walk around kicking who don’t do this well.

(1) Shatzkin owned up to the mistake, big time. In one of the many comments on the piece, he is gallantly determined to apologize to Coker—who is generous in return, by the way Shatzkin promises to create a new post, which he does do.

(2) Shatzkin then leaves the errant post in place, fully marked, as you see above, for its inadequacies, but preserving a valuable comment chain and taking full responsibility for the initial confusion:

I am leaving it up because I have to admit to my errors (this is the first time in five years I have had to do this), and because there were some useful comments. (And who knows? We may get more.) I will write another post…reflecting on Mark’s [original article] in the next couple of days, this time giving observations based on a correct interpretation of what he says in his.

Clear, open, frank revelations of gaffes are the only correct course. They’re embarrassing but important if we’re to be able to trust each other in the dire debates of our digital indecorum.

So it is that while i may not always agree with Shatzkin’s positions on things, I can go to the mat here to say that the man knows how to take his mistakes and register them properly, and I appreciate this.

Really sorry about yesterday. Misunderstood @markcoker the first time. But got it right this time. http://t.co/HmJlns25cb

Now, to his followup column and its messages for us.

In (another leggy Shatzkinian headline) Getting Mark Coker right this time and agreeing with him up to a point, Shatzkin’s course correction explains that Coker’s original story was talking about dollars, not unit sales (numbers of books sold). Coker’s basic assertion was this:

By my estimates, self-published ebooks will account for 50 percent of ebook sales by 2020.

The spreadsheet of estimates and projections he used (a la Hugh Howey’s AuthorEarnings.com reports) is available for download on the story and it’s there that it’s made clear that he, Coker, is talking dollars, not unit sales. But, as Coker, himself, volunteers in comments on Shatzkin’s first outing, the Huffington Post op-ed piece from Smashwords doesn’t make that distinction clear. Hence Shatzkin’s wrong assumption that unit sales were at issue, not dollars.

With that confusion sorted, Shatzkin is able to return to Coker’s piece and write this:

What Coker did was point out that the 15% ebook dollar share for indies was within the estimated 30% of the market that is ebooks, 70% still being print. Doing math with his share number, he concludes that self-published ebooks are taking 4.5% of the dollars in the overall market. I’d put them at somewhere between half and two-thirds of that.

So far, so good. Shatzkin and Coker are describing a smaller current standing of independently generated sales than some entrepreneurial authors would like to think is there, but they both allow for what Shatzkin refers to as “enormous growth in the number of indie-published ebooks we will see.”

I think a grain of salt is needed about how economically significant they will be either for the industry at large or for the vast majority of individual authors following that path even though they are bound to grow quickly.

In fact, with a nod to Howey’s AuthorEarnings.com work, he puts it this way:

Indie ebooks are not yet commercially important if we think about consumer dollars. (But, of course, as Hugh Howey and Coker point out, the author keeps a lot more of those dollars.)

And I like what I would describe as the mechanical questions he brings into the mix next, two of them:

(1) How fast will the indie self-publishing ebook market continue to grow at the expense of publishers who do it for profit? (All of the calculations from Coker and Howey about the benefits to indie authors assume they do it themselves, not through some new-fangled indie-first publisher or aggregator. If they do it through anybody else, new or old, the author share will decline. Every participant takes a cut.)

(2) For any individual author, how does the decision of whether to do it themselves or sign with a publisher look?

Guess where he’s headed: the bifurcation many of us are talking about.

‘Bifurcation’ of Publishing: And of the Readership?

Many of us are starting to suspect this is the case. This graphic created by Coker for his article as “Modeling the Rise of Indie Authorship” certainly won’t steer you far from the idea of two trains running.

And many entrepreneurial authors like to boast of readers who choose to read “indie only.”

As Shatzkin speculates earlier in the piece:

If indie readers form a “separate” market, is it growing or is it static? In other words, do indie ebooks draw on a particular pool of readers, so that we have two separate competitions going on for eyeballs and ebook sales?

I believe we do have two markets. Part of that is genre-driven. Many readers who habitually consume romance, thrillers, and sci-fi have found less expensive digital-first and author-published alternatives perfectly satisfying. They read lots of units. So it is likely that a concentrated cohort of readers is responsible for a big chunk of the indie books.

And then, the kicker, a reason, in fact, that independent authors might not feel so cheery about the indie-only readers base they say has arrived:

If that is the case [that there are indie-only readers avidly feeding the indie-book community of authors], then indies [authors] compete with indies [their fellow authors] more than they do with publishers. And since we believe that a big part of indie sales growth will be driven by indie title growth, it could be that the sales will have trouble keeping up with the titles. That would mean the path to success for each individual indie author would get harder.

How many of our most successful self-publishing authors have told us about the pressure from readers to publish the next installment, the next chapter, the next book? “Give us the next book! Hurry up!”

We could see a day when a fairly stabilized community of self-published book readers finds themselves hounded instead by their authors, who exhort that audience to read faster. “You haven’t read my tenth installment yet! Hurry up!”

Here’s a passage from Coker’s Huffington Post piece that Shatzkin does not get into: the anger of the authors. I’ll give the whole thing to you, this is his tenth and final point in the piece:

Writers are angry. After centuries of living near the bottom rung of the publishing ladder, writers are feeling their oats and relishing their new-found independence. Writers are rejecting rejection. They know they no longer need to bow subservient to the whims of publishers. Writers are placing new demands upon publishers, asking for higher royalty rates on ebooks, faster sales reporting, faster payments, more transparency, more generous reversion clauses, more control over cover design and packaging, and more post-publication marketing support. Publishers are digging in their heels and labeling these demands as unrealistic. Writers are upset that several publishers have launched vanity publishing imprints powered by Author Solutions — imprints that exploit uneducated writers by selling them overpriced publishing services. Writers view sins against their writerly brothers and sisters as sins against all authors. In total, these perceived publisher transgressions are undermining the goodwill and loyalty that writers once felt toward publishers. If publishers are unable to close the rift, the deal flow of new authors will diminish and existing authors will defect.

This is all correct, from my own observations. I think Coker is capturing the tone here. I think the author corps and the publishing establishment are growing farther apart, not closer. That bifurcation may be as close as we’ve seen it yet to a done deal, and I’m not sure the publishers can salvage it. There are questions of whether most publishers want to salvage it, after all; of whether they see such a divide as significant to their interests. Some do, I think.

But I’m reminded here of the lines from the pseudonomynous “Agent Orange,” a literary agent, at The Bookseller’s blog pages on Monday, in a piece called Divide and Conquer:

As an industry we are disdainful of this self-published KDP world…The hundreds of thousands (millions?) of people who self-publish are incredibly valuable: as super consumers of books, as avid reviewers and spreaders of word-of-mouth, and for the data they reveal about the market. We alienate them at our peril.

So add, then, the question of the readership. While lots of authors are fond of saying that readers don’t care whether something is traditionally published or self-published, many of them also want to tell you there’s this marching army of indie-only reading author. So which is it going to be?—they’ll read anything? or they’ll read only free-range indie books?

And if those two readerships square off? You tell me.