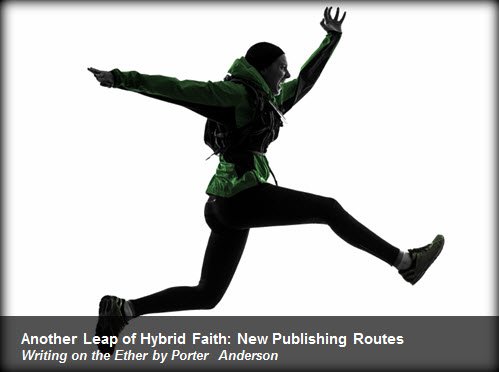 “Upside the Head With the Clue Stick”

Shanna Swendson, author of the Enchanted Inc. series of books, is working what some authors might consider near-magic in a transition from traditional publishing to self-publishing.

And being professionally bewitched seems to be growing on her.

Those who know that Swendson lives and works near Dallas will appreciate one of her book titles, Don’t Hex With Texas. That play on the state’s “Don’t mess with Texas” slogan is part of the Enchanted Inc. story of Katie Chandler, a heroine “so normal that she’s immune to magic.”

It’s the fourth book in the series. It almost was the last. Random House’s Ballentine Books had gone that far before declining to go further with the series.

“I had one more book planned” in the series “to close out the story arc,” Swendson says.

But she had nowhere to go with it. Until her Japanese publisher stepped forward and asked for it.

“But I decided to do that book. Self-publishing? Wasn’t a glimmer yet.”

The Japanese publisher asked for a sixth Enchanted Inc. book. And then Swendson offered a seventh to build out the series. So it is that Nos. 5, 6, and 7 were being published overseas but not in the States.

And somewhere in there, “that’s when Kristin started the water torture.”

“It took me about two years to convince Shanna to digitally publish on her own the continuing books in the series,” water torturer Nelson says. “She didn’t like the stigma attached to self-publishing. I finally asked her, ‘Is that stigma worth passing up $5,000 a month in earned income?’

“That’s when she decided to jump in with the books she had already written.”

Swendson’s version: “Kristin hit me upside the head with the clue stick.”

I first heard this story in October when Nelson was on our CONTEC Conference Town Hall panel at Frankfurt Book Fair on the impact of self-publishing on traditional publishing. Ether host and Virginia Quarterly Review (great new redesign) web editor Jane Friedman wrote a top-notch account of the panel in Frankfurt, Is Self-Publishing the Most Important Transformation in the Publishing Industry?

Nelson offered Swendson’s story to the panel as an example not only of how a traditionally published author may struggle to make a decision in favor of self-publishing, but also of how that decision might be seen to impact traditional publishing: books that might have been produced profitably by a publishing house are produced, instead, by the author, herself.

Swendson is a remarkably thorough thinker about her career and how to handle it. A delightful conversationalist with a quick laugh, her comments carry with them the voice of her blend of women’s fiction and fantasy…and that means, of course, you’re hearing a hard sell to publishers in a market that traditionally likes its genre characteristics drawn in bold, bright lines.

“That’s the all-or-nothing mentality,” she says, that can cause publishing “to glut the market.

“In self-publishing, you don’t run into that effect of everything being the same” as you might when publishing’s pile-on syndrome occurs to follow a trend. And in online sales, she adds, you can classify books with more than one categorization—”unlike in bookstores, where your book can only sit on one shelf.”

A new series she’s beginning to work on with Nelson, she says, is “women’s fiction with a fantasy element? Or fantasy with a women’s fiction element? It’s more about the Celtic legend of fairies than Disney-wingy fairies.”

And Nelson ratifies what Swendson is saying about a self-publisher’s comparative flexibility in marketing material that doesn’t niche easily:

When a work doesn’t fit solidly in a genre, it can be hard for a traditional publisher to publish simply because it has to be shelved somewhere. And they want clear parameters for how to market it. With Shanna’s work, she’s solidly on that line between women’s fiction and fantasy. She has a solid fan base that loves her Enchanted Inc. series. And they are going to love her brand new series that’s in that same sweet spot for her audience. They don’t care what genre we call it.

And this time, the non-Disney-wingy flight into self-publishing isn’t quite so daunting because she’s experienced the help of something called the NLA Digital Liaison Platform.

That would be Ms. Clue Stick at work with Nelson Literary’s own program of supported self-publishing for clients.

“We take the risk”

“To be clear, NLA Digital is not a publisher.” Kristin Nelson is careful to get that point across early on in talking about the agency service she’s formalizing this week with a new Web site, NLADigital.com.

“Our author clients,” Nelson says, “do not grant us rights. They maintain full control of their rights and intellectual property. However, what we do offer is a platform that fully supports them in an endeavor to indie publish. “

Lori Bennett is Nelson’s Seattle-based colleague at the agency on all  things digital, overseeing the development of the platform.

She stresses that the Web site is brand-new—as in work-in-progress new—and perhaps won’t have everything in place quite yet as we get this early look.

Clients can use the distribution-venue-only option [to] share their files and we simply publish the titles in outlets they currently don’t have access to for a commission. This mostly translates into library outlets such as Overdrive, 3M, Ingram, and Baker & Taylor as well as POD.

Then there is the full-service option [which Swendson uses]. In this track, we are a full partner with the author on cover art, copyediting, converting of files, publishing the work on all venues available, etc. All for our commission. Some authors really aren’t interested in navigating all the fine details of indie publishing so they love working with us.

Nelson tells me she the agency has 17 clients currently using NLA Digital platform.

The costs are shared by the agency and the client, with the agency making the initial outlays. “In the full service option,” Nelson says, “NLA Digital fronts all costs and the author reimburses us for half of those costs via the royalties they earn. This way money always flows to the author. And if we don’t recoup the costs, then we don’t. We take the risk.”

As Swendson notes, one of the great advantages to an author in such a service as NLA Digital is its catalog of books made available to library distribution services—one of the most challenging sectors for a self-publishing author to get into.

And in a particularly interesting observation, she says that working with Nelson’s NLA Digital platform “is a lot like working with a publisher, only when it comes time to make a decision, it’s mine, the buck rests with me.”

In the three self-published Enchanted Inc. series books, for example, Swendson says, “We could hire the same copy editor and cover designer” that Random House had used, so the look and feel artist Nina Berkson developed for the series plays out seamlessly in the final three books, the self-published trio.

A distinction in working with NLA Digital? — “The decision on cover art and all was up to me,” she says.

But in a very nice compliment to Nelson, Swendson says her agent is such a good developmental editor that “I hear Kristin’s voice in my head now as I write” guiding her on various points.

“For several of my authors, when they were with traditional publishers, the editors were overwhelmed so I ended up doing most of the editing anyway. Trust me, it’s not my preferred method of working! I want my client to have a great editor partner. That’s the way it should be and for 95 percent of the time, that is true.”

All is not self-publishing, even now, for Swendson.

Both she and Nelson are proud to tell you that her debut YA novel, Rebel Mechanics, is to be released by FSG Books for Young Readers and the Margaret Ferguson Books imprint.

Set in the late 1800s, the piece is what Nelson describes as “a YA alternative history steampunk setting” in which the American Revolution “hasn’t happened yet. The British ruling class have magic and control New York but the rebel Americans have steam technology.”

The steam of self-publishing’s stigma can still fog up a writer’s viewpoint, too, Swendson says.

“There are still a lot of media venues that don’t take you seriously” as a self-publisher, “and don’t even want to talk to you” when it comes to review requests. “They still treat you like the little old lady who published a book of poems about her cats and is wondering why the newspaper won’t do a story about her.”

Therefore, for her new series, the one with the Celtic legendry?

“Shanna wanted to explore traditional options,” Nelson says, “so we did.” In an interesting agent-eye’s-view on industry procedure, she adds:

Half the editors who have the novel still haven’t gotten back to me and I submitted it this past summer. This, despite repeated follow-ups on my part. That’s really egregious. If an editor doesn’t have time to read, just decline looking at the submission. Leaving an author in limbo is not good business.

Well, that new series may well be traditional publishers’ loss anyway, Nelson says, at least at the outset:

Shanna just emailed me this week and she said she would prefer to indie-publish.

For context, it took me two years to convince her to indie-publish those Enchanted Inc. novels she already had written. Now it’s 18 months later…[and she] has changed her mind.

The message on the email from Swendson, Nelson says, “joked that I shouldn’t fall off my chair at this decision.”