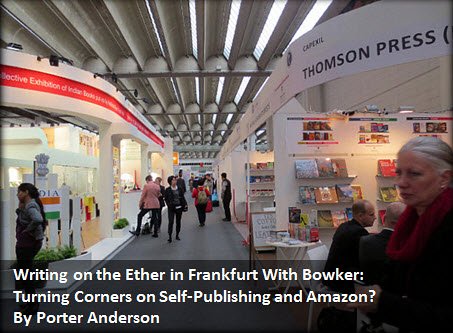 Going ’round the Bend in Frankfurt

Lots of major pavilions at Frankfurt Book Fair this year seem to feature attractive, gently curving corners. Surely no more than a design idiom of the season, there’s still something right about these tidy, rounded edges in a trade show that will see more than 7,500 exhibitors and more than 300,000 attendees in three days. We’ll be shaking out the sand for weeks.

These massive trade shows and their associated conferences are the settings in which deep-level shifts in thinking within the industry! the industry! sometimes are registered for the first time.

Here at the 2013 Frankfurt Book Fair this week, if we’re not actually walking past a couple of smoothly contoured bends, we may at least be able to peer around them.

(1) Self-publishing. We may be seeing a widespread, collective nod of recognition going on; not a big “eureka!” moment, but a frank acknowledgment that the energies of the entrepreneurial-author community no longer can be dismissed as a faddish bubble of activity nor as negligible in their effect. Bowker has stepped in to add some new edge to this concept.

(2) Amazon. Not only is there less time and energy wasted on bad-mouthing Seattle here in Frankfurt than in many such earlier gatherings, but one rant against the retailer has been met with stark derision in the publishing community, and, in a more signal moment, a major leader in the business has waved the closest thing we’ve seen yet to an olive branch.

We’ll take these two elements separately. Remember, you can follow the main tweet-storm being raised by Frankfurter Buchmesse via hashtag #fbm13.

Back from day 1 at #fbm13 – saw a lot of my favourite people, talked all my books, threw some serious shapes, ate a lot of sausage.

(1) Self-publishing: “The Only Discussion We Need To Be Having”

We’re lucky to have Jane Friedman’s fine writeup at Virginia Quarterly Review (for which she is Web Editor) on the large “town-hall” style panel I moderated yesterday at Frankfurt Academy’s CONTEC 2013 Conference here.

Yes, nine panelists, and at my request they sallied forth without their usual PowerPoint presentations and formal opening remarks. They allowed us to dive right into a discussion format in which audience members engaged with us.

I’m hoping to have some images from the session for you soon from the conference administration; they’ll be added here.

Echoed by Matting’s write from Munich at his Die Self-Publisher-Bibel blog in Hugh Howey, Amazon, Kobo, BoD, LeanPub, PubSlush und das Self Publishing, Friedman, who is  points out that our good colleague Andrew Albanese of Publishers Weekly covered the session and then went to the conference plenary for a journalists’ wrap panel to announce: “The self-publishing discussion is the only conversation we need to be having today.”

All the changes happening in publishing were in fact encapsulated in a single two-hour panel conversation on self-publishing, with nine people from a wide cross-section of the publishing community. That’s not to say the other sessions were irrelevant or lacking in quality, but that this panel felt like its beating heart. (Or—perhaps for some—an uncontrollable tumor that threatens the entire organism.)

Geuppert, who has just surveyed authors in Books on Demand’s seven European nations of operation, brought to the table the kind of ironic finding that was corroborated for us during our session by Sam Missingham with her new results from The Bookseller’s and FutureBook‘s annual publishing census, as well as by Matting’s survey of German authors. We’ve seen this disconnect before, and it’s so interesting that I’m going to put it into italics for you:

This is the kind of tension that exists in the intriguing dynamics of this stage in publishing’s authorial transition, and Matting has picked out some useful quotes from our debate which, similarly, show up a lot of discrepancies in how these issues are held.

And if we closed CONTEC 2013 on Tuesday with a sense that there at least might be a real understanding that we finally must talk about self-publishing and its implications for the industry, there was a surprise second wind coming around that corner Wednesday in the form of new stats.

Bowker: A 59% Gain in Self-Published ISBNs

There’s more, in a press release just out from Bowker, which has an author-services site, SelfPublishedAuthor.com:

eBooks continue to gain on print, comprising 40 percent of the ISBNs that were self-published in 2012, up from just 11 percent in 2007.

Catching the lingo here? I’m really pleased with the way Beat Barblan, Bowker’s Director of Identifier Services, is phrasing all this.

Note “a new analysis of U.S. ISBN data” and “40 percent of the ISBNs that were self-published…”

This is Barblan and his team—which includes a key CONTEC speaker, Laura Dawson—aggressively phrasing what they’re saying in careful terms you don’t want to miss. 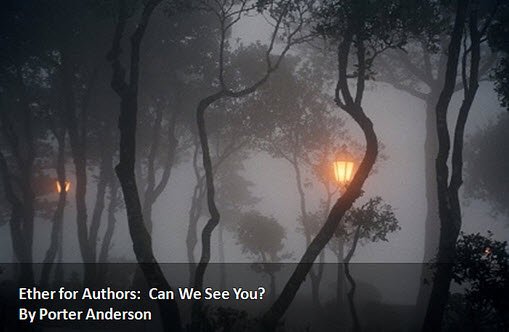 As I’ve written before—in one instance in Publishing Perspectives’ Ether for Authors—neither you nor I nor Bowker actually knows how many books are self-published and/or sold.

Nor do we know how many are ebooks.

We actually and simply do not know how big the self-publishing or ebook segments of the industry are. This is because large retailers including Amazon don’t release their sales and production figures. And many times, ISBNs aren’t assigned to the work.

When a book is moving through the market without an ISBN, Bowker cannot see that book. If they can’t see it, it can’t be counted.

Of course, there are reasons some self-publishing authors choose not to get ISBN assignments for their books. Some writers see the idea of paying for ISBNs as a bow to “gatekeeper” bureaucracy. (The preferred assignment is a separate ISBN for each format of a book; Bowker sells a pack of 10 ISBNs for $250, by far the most economical way for authors to buy ISBNs.) Some authors think of the ISBN only as a little-used means of searching for a book; they overlook the issue of sizing up the marketplace.

CEO of Bookish is speaking at #fbf13 and six people are listening. Which seems about right

I spoke with Barblan during the afternoon Wednesday, and at the CONTEC panel on self-publishing on Tuesday. His statement in the release on the new information is a clear recognition of the “entrepreneurial author”:

“The most successful self-publishers don’t view themselves as writers only, but as business owners. They invest in their businesses, hiring experts to fill skill gaps and that’s building a thriving new service infrastructure in publishing.”

The full report will be posted to the SelfPublishedAuthor.com site next week, after a weekend presentation here in Frankfurt.

Some more elements of it in the meantime, courtesy of Barblan and his staff:

“My hypothesis is that [Amazon has] expanded the market . . . they have brought innovation and they’ve grown for a reason, and we will grow together.”

In a CEO roundtable event with media members Wednesday at Frankfurt, Dohle was, in part, responding to commentary from London literary agent Andrew Wylie who, in Laura Bennett’s Q&A at The New Republic, The Andrew Wylie Rules, slagged Amazon as something akin to Napoleon on the march.

I think that Napoleon was a terrific guy before he started crossing national borders. Over the course of time, his temperament changed, and his behavior was insensitive to the nations he occupied.

The story has drawn more cackles than anything else, Wylie’s comments about “megalomania” don’t seem to fall on the welcoming ears that might once have met them at the Book Fair.

This time around, it seems that many who have read the story are likely to think it tells them much more about Wylie than about Amazon.

And for his part, Dohle claims the high road and stays there. As Farrington quotes him:

“Fundamentally, the relationship is about co-operation and not about confrontation. I don’t let anyone talk me into the confrontational mantra. We want to reach out to as many readers as possible. Of course, we have to manage each other, on issues such as terms, but fundamentally, we are aligned.

Dutch publisher: I need a couple of thrillers, a misery memoir and an upmarket women's commercial.
Me: and some bananas?#frankfurtbookfair