Today’s guest post is excerpted from Writing for Audiobooks: Audio-First for Flow and Impact by playwright and fiction writer Jules Horne (@method_writing).

When it comes to audio writing, “flow” is critical. Flow is the art of shaping the listening experience as it unfolds. Some flow techniques will be familiar, such as hooks and questions. Others, such as attunement, may be less familiar.

Openings are crucial, as they’re the point where readers engage with your writing. It’s an emphatic position that commands attention. It says, Listen up! With audio, your very first words are for tuning your listener in. They don’t need to carry much meaning. Think of the phrase “once upon a time.” It doesn’t mean much. It just signals that a story is about to begin. What counts is what comes next:

Once upon a time there was small girl who wanted to visit her grandmother.

Listen! A story! About a small girl and her grandmother.

The first few words are like a musical upbeat—the intro before you land on the main beat. This kind of intro phrase isn’t just used in fiction; it’s just as common in non-fiction.

Often, news stories can be as little as 20 seconds long, and each one needs a fresh attack. So these apparently meaningless signposts have an important flag-waving job to do. But as with fiction, the significant element lands not right at the start, as you might expect, but in the next few words. Like this:

And in other news, an escaped panda…  Meanwhile in Birmingham, a couple have been arrested… And in other science news, a total eclipse…

Why is this? Because of a factor very important in audio writing.

Attunement, or “tuning in,” doesn’t mean dialing to the right station. It’s the time it takes for listeners to engage with a voice. To pull focus. To get their ear in.

If you’ve done meditation practice, you’ll be familiar with attunement. In a room full of people, it takes a little while for everyone’s attention to settle where it’s meant to. So the group leader allows a little time.

Listening to audio is similar. Tuning in only takes a few seconds, but those seconds are vitally important.

First, voices are highly varied, and it can take a little while to get used to someone’s style of speaking. The narrator may have a different accent or dialect, a different speed, pitch or delivery than you’re used to. So these phrases act as a kind of voice taster, helping the listener to settle in.

Second, listeners drift. Their attention may have wandered to something else. They may need to be pulled into a new zone of focus.

And third, you may want to signal a new opening, a fresh point of attack. Maybe a new chapter or a change of scene, or simply a different news story.

Listeners need a moment or two to transition mentally, whether to a new voice or a new topic. Transitional phrases help to carry them along more gently, tuning their ears in. If transitions are too quick, they can sound odd, even comedic. Like this:

…the funeral takes place on Friday. An escaped panda…

If one story is sad and the next quirky, the transition is too abrupt and doesn’t allow any adjustment time, either for the listener or the speaker. You’ll often hear experienced radio presenters naturally pause to create a space for transition, or use a transitional phrase. It feels necessary for rhythm and flow, and it’s one of the main differences between audio and print.

Attunement is one reason why writers need to work particularly hard on openings. Look at the openings of new chapters and sections. Identify the main words that carry the most important meaning. Try to place them not right at the start of the sentence, but a few words in, to allow room for attunement. The listening human brain can hold only so many ideas at once. Overloading listeners with too much story detail can simply overwhelm them, so you need to choose what to focus on in those crucial first moments.

I like to think of story openings as cog wheels. The reader needs to engage properly and securely, to create traction that carries them along. If not, it can feel like a bicycle with slipped gears. You can slither along, miss bits, and never feel secure in the story.

In the hands of a skilled storyteller, you as a reader feel confidently engaged from the start, with just the right balance between clarity and intrigue. One way to achieve this in writing is to narrow your focus in your opening right down to very few elements. You can then develop these elements in more detail. But first, they need to be firmly established in your listener’s mind’s eye.

When you write a story, you need to paint a picture for the reader. With audio sweeping by so fast, the broad strokes of the picture need to be established even more quickly. A bit like a rough outline or a silhouette, something just for orientation. The details can be filled in later.

It can be helpful to shoot for only three elements–say, the character, the location, and how they’re connected.

A police officer lying down in a street. A woman in a field with a dog. A child sitting on a swing.

With these simple elements, readers can already create a strong visual image. This kind of starting point gives our minds a basic picture to hold onto. We can fill in the rest over time. We don’t need to know right away that the child has short brown hair and a green anorak, or that the policeman has a shotgun wound to his right temple. That level of detail can come in the second or third sentence, or later in the story.

But for orientation, especially with audio, it’s helpful if some clear visual building blocks land right at the start. It’s amazing how whole stories can be evoked with just three elements:

So, check your chapter openings and see if your three key visual elements land effectively, using simple vocabulary. Don’t over-describe with complex vocabulary and variation, especially not until the 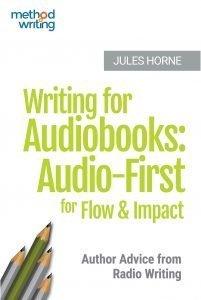 This is important not just for the very start of your novel or story but also for each chapter opening and for any new scenes and sections within chapters. Each of these calls for a mental leap by the listener, especially if you’re taking them to a new location, time, character or viewpoint.

Note from Jane: If you enjoyed this post, be sure to take a look at Writing for Audiobooks: Audio-First for Flow and Impact by Jules Horne, Book 3 in the Method Writing series.

Jules Horne is an award-winning fiction writer and playwright. She teaches for the Open University and lives in the Borderlands—the part of Britain that inspired Game of Thrones. For a manual of performance-ready tips and techniques needed for audio-first writing, see Writing for Audiobook: Audio-First for Flow and Impact by Jules Horne, Book 3 in the Method Writing series.