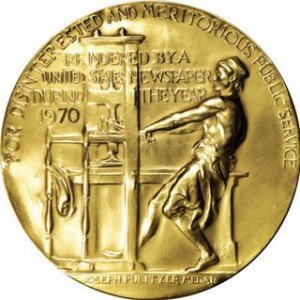 Today’s guest post is from writer Joe Bunting, who blogs at The Write Practice.

We all know there are novels and then there are “literary” novels. When you read Margaret Atwood, it just feels different than when you read Tom Clancy. And for some reason, these literary novels are the ones that win all the most prestigious awards like the Pulitzer Prize, the Man Booker Prize, and the Nobel Prize for Literature.

Literary authors are known for their unique voices and experimental styles. You might have learned not to write run-on sentences in school or to avoid beginning a sentence with “and,” but literary writers often seem to flaunt their rule-breaking ways.

This is both good and bad. Literary novels can be difficult to understand, but they can also be beautiful to read, like poetry.

So if you’re salivating to win a Nobel Prize, and just don’t think your diplomacy skills are good enough to win the Peace Prize, here are eight techniques you can use to make your writing more “literary.”

Long sentences can make for beautiful, complex prose that you want to read again and again to fully appreciate.

Hemingway, Faulkner (both Nobel winners), James Joyce, and all those 1920s modernist authors were known for their long, run-on sentences, full of conjunctions and lacking “correct” punctuation. Contemporary writers, like Cormac McCarthy and Tim O’Brien, do the same. Here’s a quote from O’Brien’s The Things They Carried which illustrates it clearly:

Now and then, however, there were times of panic, when they squealed or wanted to squeal but couldn’t, when they twitched and made moaning sounds and covered their heads and said Dear Jesus and flopped around on the earth and fired their weapons blindly and cringed and sobbed and begged for the noise to stop and went wild and made stupid promises to themselves and to God and to their mothers and fathers, hoping not to die.

Writing long sentences can get old. If you follow up an extremely long sentence with a short snappy one, you can whip your reader to attention. Notice how Cormac McCarthy does it in Suttree:

One thing. I spoke with bitterness about my life and I said that I would take my own part against the slander of oblivion and against the monstrous facelessness of it and that I would stand a stone in the very void where all would read my name. Of that vanity I recant all.

Try reading it aloud. Notice how that last sentence feels like a gavel, cracking in a loud courtroom?

Literary writers are interested not just in what their words mean, but in how they sound. The technical term for this is phonoaesthetics, the study of the sound of words and sentences. Like poets, literary writers want their words to melt on their reader’s tongue like rich, dark chocolate. They want their readers to stop and say, “Mmm,” and stare off into the distance contemplating all that is beautiful.

There are a few techniques writers use to make their writing more euphonic, including alliteration, assonance, and consonance, but the best way to develop your “ear” for lyrical writing is to read other lyrical writers very slow. You might pick up some Annie Dillard, William Faulkner, or Virginia Woolf.

4. Make an allusion to the Bible or Moby Dick or Milton.

Literary writers are well read. They realize their writing doesn’t exist in a vacuum, and so they subtly pay homage to the classic writers who have gone before them, which also deepens the meaning of their own work.

To make an allusion, you use an image, character, or even a direct quote from another work of literature. These act as portals, coloring your story with the meanings wrapped up in the work you’re referencing.

Also, it makes those who “get it” feel special.

5. Use an eponym to name your characters.

Another way to use allusion is to name one of your characters after a character in another work. This technique works as a kind of literary pun, and creates an implicit association, a shared relationship, with the character in the other work.

If they’re writing about birds, they might avoid describing them as the red bird or the blue bird, but rather the kingfisher, the painted bunting, or the yellow-bellied sapsucker.

The story-within-a-story is one of the oldest literary techniques, and it’s a simple way to create rich, multi-layered stories.

It works simply by having one of your characters tell another character a story, and this second story becomes the main story of the novel. Think Arabian Nights, where Scheherazade tells the Sultan story after story and eventually manages to make him fall in love with her.

Or Shakespeare’s Taming of the Shrew, where the story of Petruchio “wedding and bedding” Katherina is set within another play about a drunk tricked into thinking he’s rich.

Or Salman Rushdie’s Midnight’s Children, where the protagonist writes his memoirs as he narrates them to his mistress.

Literary novels tend to have a wide, national or international scope, even if they portray local events. Hemingway, for example, often set his novels within the context of great wars, like World War I or the Spanish Civil War. Fitzgerald’s Great Gatsby is considered a portrait of the “Lost Generation” and the Roaring 20s because of its memorable characters who were caught up in the decade’s debauchery. Rushdie’s Midnight’s Children is about the rise and “fall” of India, from Independence to Indira Gandhi’s injustices.

You may not want to win a Pulitzer, but if you do want to give your writing a touch of literary flair, these techniques are a good place to start. By far, the best way to learn more about these techniques, though, is to read more literary fiction. Here are a few good titles by authors I’ve mentioned:

What’s your favorite “literary” writing technique? Did we miss any?

Joe Bunting loves to write and to help other writers improve their careers and craft. He can be found at The Write Practice, an online and offline community for creative writers, and also on Twitter.