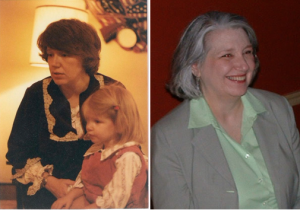 The following interview is with Sharon, interviewed by her daughter Rebecca Huehls (age 33).

Where did you live?
I turned 33 in November 1979, and we moved into the house where we are still living in September of that year. Except for a couple of months, I have never lived anywhere else but the Southside of Indianapolis.

What has been interesting, though, is reading about other places; having many people from other places like Korea, Japan, Tunisia, Brazil, Turkey, etc. stay with us as homestay students; and visiting around the world. So I’ve been able to stay put and also see the world.

What did you do for work and/or what was a typical day like?
I had four children, ages 8, 7, 2 (Rebecca), and newborn. That was enough work. I found rearing children very rewarding, but I could have used some help.

A typical day was to get up whenever baby newborn cried, change diapers, nurse the baby, corral the 2 year old, get the grade-schoolers up and out the door, and feed the 2 year old.

After the baby and 2 year old went to bed, I made sure the older kids did their homework. Then it was bedtime for them, and I had a little time to do something else, maybe.

What did you worry about most? (First thing that comes to mind.)
Money; there was huge inflation going on at the time. Some mortgage rates were in the teens, and the price of everything went up almost daily. It was difficult to plan, but some sort of planning was required anyway.

What did you think the future held for you?
I didn’t know. That was the second thing I worried about. The pressure against having children was intense, and I got many nasty remarks. I felt I should have a paying job, but also felt that since I was the only parent reliably at home, I needed to be there. My husband was frequently gone with his job. I also tended to live in my mind and think about things endlessly, which is often not a good idea.

At the time, a nuclear confrontation with the USSR was still a real possibility hanging over everyone’s head. In addition, the OPEC nations were beginning to be a threat to the world. I wasn’t completely sure that there even was a future.

How do you look back on that age now?
I marvel at how much energy I had. I wish there had been the Internet with its discussion boards and the ability to find out so many things quickly, without having to go anywhere. It was an interesting age, but with many uncertainties. I had always thought that adults just knew how to do things. It was a bit of a shock to discover that life is a continuous work in progress.

What would you tell your 33-year-old self now?
Do the best you can with the knowledge and ability you have available. Not letting anyone talk you into having an abortion was absolutely right. Many things are out of your hands, so don’t feel responsible for everything and everybody. The world has been and always will be dangerous; it is the type of danger that changes. Courage is necessary. Suffering or difficulty of any kind is not the worst; lack of love is. Small things done with love and care matter. Don’t feel badly about taking care of yourself, even though you may have many responsibilities to others as well.

I’ve been enjoying this series–it’s such a neat thing. I turned 41 last May. My wife and I were recently visiting my mom, and out of the blue she said, “It’s so weird to think you’re 41. I was 41 when we moved from Chicago to Texas.” (I was 14 at the time.) I talked about how adult my mother and stepfather seemed at 41 and how, while responsible, I sometimes still don’t feel like an adult. My mom chatted about how old she felt at 41. Driving home after the visit, I thought about how I viewed my Dad… Read more »

So glad to hear this! Thank you so much for commenting and spreading the word. Very appreciated.

To Sharon: You look better now than you did then!

To Jane: Thank you, again, for this series. I can’t always describe why, but reading these makes me feel good.