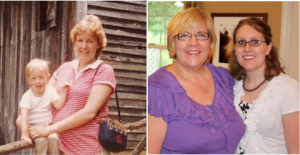 The following interview is with Martha Hill, interviewed by daughter Melissa Wuske (age 26).

Where did you live?
I lived where I live now, in Loveland, Ohio, in a brick ranch that we built two years before.
What was a typical day like?
I was a stay-at-home mom. I was doing exactly what I’d always what I’d always wanted to do: be a homemaker and a stay at home mom. I had a two year old and I was pregnant with you. A typical day was taking care of the house and taking care of Emily, reading to her. Laundry. Probably the most creative thing I did was sewing. I’d made clothes for her and things to sell at craft shows, hand embroidered dresses. I cooked dinner for the family. In the summer, Dad worked in the garden and I canned and froze what we grew. I also volunteered at church.

We’d been married almost five years. I’d worked full time when we first got married, but I was under a lot of stress then. It was right after my dad had been killed in a car accident, and I’d graduated college, got married, and moved. I didn’t have good friends here yet besides Dad. He was working half the evenings and every other weekend and I was working 8-5, so I was alone a lot. I didn’t do well with that. I was crying a lot, so we decided I needed to quit the job. Then I babysat to bring in a little money. I did that until Emily was born and a little after, but I don’t enjoy other people’s children as much as my own. Then I started sewing. I always wanted to contribute financially, if I could, but I didn’t much once I quit the job. (Laughing.)

What did you worry about?
Having enough money to pay the bills. We always did, but there wasn’t any extra when you were little.

What did you do for fun?
We had friends at church that we would have over or go to their house. We played with Emily.

Gave her lemons to suck on at restaurants and watch her make faces?
(Laughs.) Yeah. We didn’t go out too much between the budget and paying a babysitter, though.
What did you think the future held?
Another baby. More of the same. But the future surprised me.
How so?
It far exceeded what I would’ve dreamed. You dad and I work together well. We’ve always had the same values and priorities—I made a good choice. So we’ve been able to live a better life than I dreamed of.

I was hoping to be able to take you on vacations. I dreamed of being able to decorate the house and actually have furniture that matched. I got to do that and we got to travel places I never dream we would’ve traveled, more times than I dreamed we would’ve been able to. I never dreamed that we were going to own two successful businesses and that I was going to be working in those businesses.

Life surprised me a lot of time—in good ways. Not that there haven’t been hard times, hard things to go through, but …
Like when I was born [with a cyst on my brain that required two surgeries in the first three months]?
I always wanted you girls to have options. I always said that to Dad. Whether you were married or you weren’t, I didn’t want you to feel trapped into having to do something. I wanted you to be able to choose, to choose the better choice or the one you liked better. I wanted you to be happy, well-adjusted adults, who love God; but the talents, capabilities, and spiritual depth of my daughters amaze me on a regular basis. We can’t take credit for that—maybe just for not messing it up as you were growing up, or for providing you a safe place to grow and learn—but as I sit back and watch what you are doing with your lives and I’m so amazed and proud.

I’ve never been one of these people with a five year plan. I more let’s see what life brings me and take it as it comes. I’m ok with that. If you have a five year plan, what if life throws you a curve? I don’t want to sit still, but I don’t have to be someplace specific in 5 years. Hey, if I had a five year plan, it wouldn’t have been as good as where I am now. Don’t limit yourself. You might go way beyond what you would plan.

What do you miss least about that time?
Worrying about the money.
What do you miss most about that time?
I guess the possibility.
Not a lot of possibilities left at this age? (Laughing.)
No, that’s not it. There were just more things still to be discovered at your age. Like if the child I was carrying a boy or girl. What will my children be like? What will they like to study and do? What will they be when they grow up. But there are still lots of things to be discovered now, too.

I really don’t miss a lot about that time. I wish I would’ve been more relaxed and spent more time playing with you guys instead of keeping the house.

For the most part I’ve always liked wherever I’m at the best, which is a gift, I think. I do miss when we were all home together—I’m happiest whenever we’re all together—but I wouldn’t go back there.

When was this picture taken?
That picture was taken the first family vacation where we didn’t just go to my mom’s or my uncle’s. We went camping because it was still cheap. But it was just the three of us, well, the four of us, but you don’t remember much.

Thank you, Martha & Melissa! And thank you, Jane, for putting together this wonderful series.