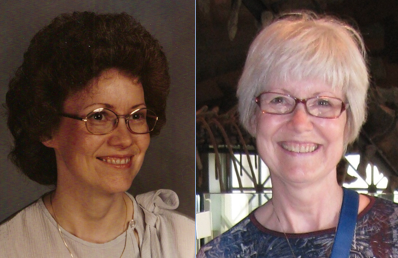 The following interview is with Margaret Jensen (age 63), reflecting on her life at age 36, interviewed by daughter Megg Jensen.

From Megg
Before I e-mailed Jane about appearing in this series, I called my mom and asked her permission first. I thought she’d say no. Surprisingly, she agreed. My maternal great-grandmother wrote a book about her life and my maternal grandfather wrote one about his World War II experiences. Mom always says her life is dull compared to theirs, but I wanted to participate in this series to show her she’s anything but boring.

In 1984, you were 36. Where did you live?
On a farm outside a very small town. The house had been in your father’s family for nearly 100 years at that time. It was built by his ancestors and the family has always farmed the land. We had one bathroom, one TV, and no dishwasher. [laughs] It’s still the same now.

What did you do for work and what was your typical day like?
I was, and still am, the library aide in the local elementary school. My day was always busy, but fun, and never, ever boring in a K-8 building. It really wasn’t work to me. It had been a dream of mine since I was a kid to work in a library. My dream came true. In 1984 I’d only been working for two years. It was a huge change to adjust to working, but my job gave me confidence I didn’t know I had.

What did you worry about most?
I worried about raising you kids right. As farmers, I worried a lot about the money and making it stretch for your sister who was getting ready to go to college and your brother who wasn’t far behind. I worried all the time about work and whether I was giving you enough attention since I’d been home for your brother and sister, but not for you. I was so grateful we had all the same days off of school.

What did you think the future held for you?
To tell the truth, I just hoped to be able to work at that job until I couldn’t or didn’t want to. I hoped things wouldn’t change much. The older kids were getting ready for college and I did worry a lot about them coming from a small farming community and adjusting to life in the big world out there. That’s a mom’s job. I worried about you being lonely. I never thought a lot about the future for myself—mostly just for my kids.

How do you feel when you look back on yourself at 36?
I think I was naive. I saw things rather simplistically. I looked to each day and couldn’t fathom what would happen as I got older. How did I get to be this old? I don’t understand how life went so fast from 36 to 63. I turned around and it was all gone. But I still feel like I’m young and I know sometimes I act like it too. I think my grandkids and the kids at my job keep me young.

From Megg
While interviewing my mom, I was struck by how much she worried about my siblings and me succeeding. She obviously had nothing to worry about since my sister is a VP in a large hospital system, my brother is a partner at one of the world’s largest accounting firms, and I’m deliriously happy writing. Back then, she always seemed calm and easygoing to me—not at all concerned. I always looked at her life as one that dreams are made of. Maybe my mom never wanted to be a famous actress, or even the PTA president, but she found a job that she loved. She lead by example, which to me, is the best way to be a great mom. (Megg Jensen is a pen name—I think you can guess who I named my novelist self after.)