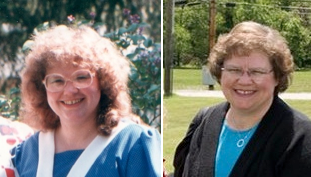 The following interview is with Cheryl Christmas Soper (age 55), reflecting on her life at age 33, interviewed by daughter Katharine McKinney.

From Katharine
My mother is in many ways my dearest friend, as well as a mirror into my own life. We both married young, had four children (three boys, one girl) and then began to wear different hats as the years went on, developing career aspirations as a way to be creatively fulfilled and help make ends meet. I have always idolized her as a talented woman who is also unfailingly kind and an amazing example of true compassion. While having almost completely opposite personalities, we share a vision for the world and for our families that unites us. I am proud of the sacrifices my mother has made for her family and the fears she has overcome to make her into the independent woman she is today.

Where did you live?
I lived at the same address I live at now, but it was not in the same house. We moved to this address in 1986 to a very old house in not good repair. It was a common house to the area, a shotgun house, so called because all the rooms are in a straight line. You could stand at the front door and shoot a bullet through the back door. Later we tore it down and rebuilt on the property.

What was your typical day like?
I worked in the library system. At the time I was at Central Library in the Technical Services Department doing acquisitions. That’s ordering and receiving materials and doing data entry for the accounts.

It didn’t matter if I did drive because we only had one car. We didn’t get the van until 1990. 1989 was a bad year for cars. I think we had two or three. We had a 1973 Pontiac that had belonged to your great-grandparents. The Pontiac had a oil leak and the engine burned up. Then we bought a 1972 Chevy, and that’s the one that got wrecked in 1990. I’d ride the bus or your dad would take me.

My typical day at work usually consisted of working on invoices. We got shipments just about every day. I had to unpack boxes of CDs, videos, I think we were still doing cassettes then. I would put the items on the shelf until they could be processed. Then I would mark on the invoice what branch ordered the material and then I would input that information into our computerized fund accounting.

I’ll tell you what, we used to phone in orders. We could order online, but we didn’t. Let me just say we almost always phoned in our orders. We would have a stack of 3×5 slips of paper with titles, publisher, ISBN number. We’d phone the vendor give them the ISBN number, then give them the quantity.

I worked until 4:30 every afternoon. Either your dad picked me up, or grandpa would get you kids and pick me up because you kids were staying at my mom and dad’s, or I’d take the bus. Then I would cook supper, and then if you kids had homework I would try to get you to do it [laughs]. I would say most of the time we stayed home in the evening and watched TV.

We went to church on Sundays, caught up on stuff that needed to be done around the house on Saturdays. I was at church Sunday morning and Sunday evening and Wednesday evening.

For recreation we did anything that was free—the museum and I remember going to New Harmony. We went to Lincoln Boyhood one time.

How far away was your career change?
I was two years away from my career change. I think I had some vague idea that there were opportunities available because some people I knew were taking Library Science classes at the University of Evansville, actually IU classes. The thought crossed my mind that I might want to take classes someday. At that point I wasn’t really thinking about a career change, or a career at all for that matter. It wasn’t a career … it was a job. I would say that I probably always hoped I’d come back home, but I didn’t really see how I could.

I began to think about changing jobs when we changed the fund accounting system we used at work from one vendor to another. Their system was so clunky and hard to use that it made me want to get out of there. That happened about a year before I actually left that department.

What did you worry about most?
I was always concerned about my family and making ends meet. Just to be able to make enough to keep the family going. At that time your dad made a career change too, a bit later, but at the time he wasn’t all that successful. He must have still been with Spectra Computers doing sales training and technical support, mostly sales.

His company was dying and we knew it. He was trying to keep them afloat and help them find better ways to do things, and he did, but it was too little, too late. I worried a lot. Worries about my kids, whether they are doing all right in school, etc.

You were sick a lot. Strep and mono, the flu that almost killed you.

In some ways you came into your own … you were in speech and theater and winning awards. But then you got sick and that was a worry. I used to do that too, be in a play and go gung-ho for 8 weeks and then be sick in bed for a week.

I was furious with the whole gifted and talented program at school. I did not think they often had the right people teaching. Most of them didn’t understand G&T, didn’t know what it was and didn’t know what to do with G&T kids. They were interested in gifted and high-achieving, and that’s not the same thing. So I worried about your brothers in that.

What was the church situation? You were very involved in church.
We were going to Beacon at the time, so that was very stressful too because it was a very small congregation, and your dad and I were willing to do stuff—and we did stuff, we did almost everything. Dad was the treasurer, I led the music, we taught Sunday School. Whatever there was to do, we did it. And we weren’t really being fed, not just because we were overworked, but maybe some incompatibility with the pastoral style. The pastor was somewhat rigid, old fashioned, black and white. Hillbilly is a good way to describe him. I felt like my children were not appreciated by any members of the church and were seen as a burden. It was a “children should be seen and not heard” kind of church.

Was there family stress?
Any family with four children, there is going to be stress. Even if your kids are good kids, there are going to be squabbles and fights, accusations of not being fair. It’s normal but it’s still stressful! Refereed all the time.

What did you think the future held for you?
I always had hope for the future. I still do. If we kept on keeping on, we’d change our situation, things would get better. And they did. Our living situation got better. Your dad became self-employed. He found new opportunities to increase his income. As for me I’d almost say the job came to me. [In 1990 Cheryl left Technical Services to become the Assistant Children’s Librarian at the new Red Bank Library.]

I didn’t go out looking for anything. But a new opportunity presented itself, and I took the chance and went for it. I guess I’m one of those people who is always behind the 8 ball, so I am always thinking about today.

I feel like I was clueless. If I knew the things then that I know now, I could have made better choices with all sorts of things, including money and other choices about living. Might have had a better idea of how to live.

From Katharine
This interview with my mother was very revealing to me. I never had any intention of turning out like my mother, but as I see where she was at age 33, and where I am now, I am astounded at the path she forged for me, and the similarities in our emotions. Because of her I am not afraid to do things that seem impossibly frightening.

At age 33, my mother was on the cusp of a new life she was making for herself. In a year’s time she would go from being a woman who didn’t drive and took a job to help make ends meet to being a woman whose career was opening in front of her.

After working as an assistant children’s librarian for several years, she began making a two-hour trip down back roads to Indiana University twice a week to earn a master’s degree in library science, which she attained, and with that, a promotion.

Now at age 33, I am taking my career as a writer far more seriously than before, and am making decisions for myself and my family that illustrate that, such as putting my previously homeschooled children into public school to free up some time for writing. I have to wonder what opportunities will break for me, as they did for my mother. 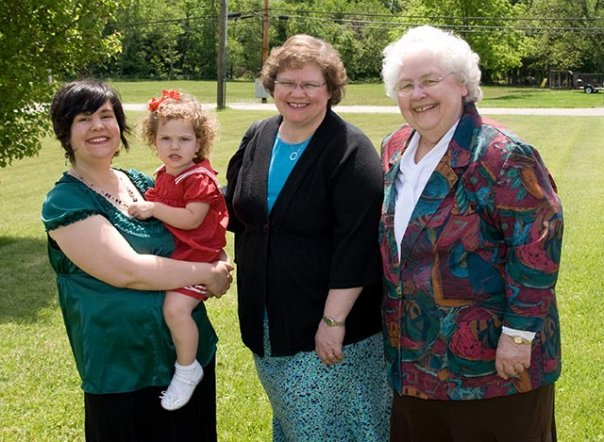