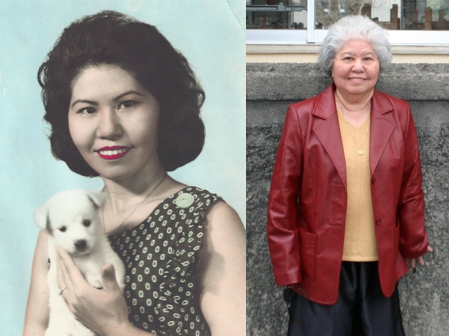 The following interview is with Chiko McCormac (age 77), reflecting on her life at age 42, interviewed by daughter Susan Hamaker.

From Susan
I was hesitant to ask my mom, Chiko McCormac, to participate in this interview because I thought she would say no. A 77-year-old native of Okinawa, Japan, my mom rarely discusses the details of her childhood during the Battle of Okinawa in World War II and the subsequent U.S. military occupation. But she said yes to talking about her life at my age, 42, and was surprisingly enthusiastic.

When you were 42, the year was 1976. Where did you live?
We were in Germany, then Daddy retired from the Army. We flew from Frankfort to South Carolina. Then we stayed at Uncle Doug’s house or two months and moved to Fayetteville, NC.

What did you do for work, and what was your typical day like?
I was a housewife. You guys would go to school, and I cooked breakfast, lunch, dinner. I did laundry and cleaned the house. Same thing over and over. That’s about it. Nothing special, no work; that’s about all.

Was that what you wanted? Were you bored with that?
Well, that’s what I do. I enjoy it. I did sewing and made quilts, that kind of thing. And ceramics. That kind of stuff. Your friend would come over and say she likes my tempura. Everybody likes my cooking.

What did you think the future held for you?
(Long pause) I have no idea. (Laughs) I lived day by day, and I still do now. I was so busy doing housework that taking care of the family was what I thought about.

But did you want to work? Did you think you’d have a job eventually?
Well, I worked before I married Daddy. I told him I could work if he wanted, but he didn’t want that. I said, okay. And I became a housewife.

How do you look back at age 42 now?
You know, when I was young and working in Okinawa—I was hairdresser, then a waitress—I always thought someday I would marry an American. So, when I think about age 42, I think hmm, I did that. I married an American, I was an American citizen, and I had two beautiful children. So, I’m proud of that.

From Susan
While interviewing my mom for this entry, I was struck by how completely different she and I are. When she was my age, she was a housewife with two young daughters and no aspirations for work outside the home. At 42, I’m married but steadfastly childfree, with a busy life and career in New York City, a place the total opposite of my sleepy hometown in North Carolina. My mom is my hero. She left her family, country, and everything that was familiar to marry an old-fashioned man from the South and raise two children in a lower-middle-class household. A widow for almost two decades, my mom still calls Hope Mills home and continues to sew quilts and cook tempura (and the most amazing egg rolls ever).

Maybe I’m old fashioned, but I like a lot that period, 🙂