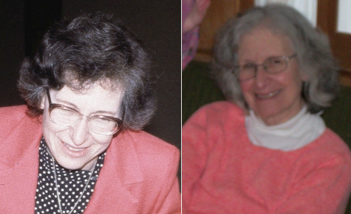 The following interview is with Laura Greene (age 75), reflecting on her life at age 47, interviewed by daughter Jessica Greene (47).

From Jessica
Mom was about to turn 29 when I was born in 1964, the elder of two children—a brother, Geoff, came along five years later. She was my age in 1982—the year I graduated from high school—and had developed a trifecta career, that of a writer/teacher/mom. As you will see, that age was productive and successful for her professionally, but heartbreakingly stressful for our family.

Where did we live when you were my age?
The four of us lived in the same suburban brick home that your father and I do now. We were transplants to the Midwest from the East, and it was important to us to live in a reasonably large city, one that had a developed arts and culture scene, and offered good education in the public schools. We chose the north shore suburbs because it was easy for your father to get to the university, and the safe neighborhoods had friendly neighbors who all cared about raising kids in a wholesome environment.

What was a typical day like?
I was, I am, a mom, first and foremost, but every woman needs to pursue her own dreams, even if it doesn’t become a full-time living. I’d always wanted to write, so I made time for that. Mornings became sacrosanct by the time you and Geoff were in school full time. I wouldn’t answer the phone, or the door, and stopped writing only at lunchtime when you kids came home. Afternoons were for household support—cleaning, shopping and cooking … especially baking. I lost a lot of opportunities for friendships because I couldn’t make time for them. By the time I was your age, I had published three children’s books with big name publishers and was finding assignments with local magazines.

What about teaching? Can you tell how that came about?
I had a master’s degree and completed coursework toward a PhD in English, so I had originally tried to get a job teaching English at one of the local colleges. That avenue didn’t open and a new friend suggested I teach religious school at our synagogue. I laughed because I knew next to nothing about Judaism. But teachers were hard to get then (mid 1970s), and I got mentored on both subject matter and the how-to’s of teaching children. By 1982, I had won the first of many teaching awards in Jewish education.

What did you worry about most?
At that time, my two biggest worries were money and YOU! I began teaching Hebrew for the extra income because your father and I feared we wouldn’t have enough to pay for college, for you and your brother. I thought it very possible that I’d become a bag lady in my old age. All the money I earned—both from teaching and writing royalties—has been for family support, and I have no regrets. As a parent, I had to ensure the best education I could for my kids. Back then, of course, I was practically paralyzed with worry over you. You were about to head off on your own, and you were still so thin and …

Psychotic?
I wouldn’t say that … I thought you were going to die. I was somewhat relieved when I found out your school had an established counseling program for girls with eating disorders. You were trying hard to get well, so I simply hoped for the best. 1982 was a terrible year.

From Jessica
It’s true, I had been battling anorexia for a couple years, and was hospitalized for a time during my senior year in high school. I had regained half the amount I lost and weighed 99 pounds the day I left for college—I’m 5’2” tall. In typical teenage style, I was unaware of my parents’ anguish, and believed all I needed to get better was to leave home and not go back. That tactic worked for a long time. Eventually, I returned as a wiser adult and repaired the relationship with my folks. Mom is now my best friend and I hate to think of living in this world without her.

What did you think the future held for you?
I assumed that writing success would continue and build. I believed I would publish more books, which I did, although they weren’t the story books I truly wanted to write. I got tired of writing nonfiction, switched genres to fiction, and then the dry spell hit. The craft and the market is so different, and I didn’t realize what skills I lacked. After many years, I chose to go back to school, a low-residency program for an MFA in writing. I improved a lot through that experience, so I’m still trying to get my novel accepted. Maybe I will before I lose my mind, or my sense of humor.

How do you look back on that age now?
That’s one year I wouldn’t want to repeat, but I wouldn’t want to repeat any year of my life. I’ve done the best I could and am happy with the way my family has turned out. I was compulsive and disciplined about work—same as I am now—and that enabled me to juggle a lot of responsibility and finish the things I cared most about. All that’s ever asked of us is to do no harm and make your small corner of the world a little better than it was. I’m lucky to have gotten feedback from students I’ve taught who tell me what a difference I’ve made in their lives. That is extraordinarily gratifying and as much good news as one can expect in a lifetime.

From Jessica
Mom’s life is a constant reminder to anyone about what may be accomplished with tenacity over time. She has always maintained incredible focus over the projects she has on her plate, never takes on more than she can handle, and commits to finishing everything. She has some natural ability, but her work ethic has taken her further than others with more talent. She’s not a household name, but she loves what she does and has made a difference in her corner of the world. I’m still learning to cultivate these habits, so despite my aptitude for word orchestration, I’m not as far along in my writing career as she was when she was my age. In 29 years, I hope I’ll be as content with my life as she is.