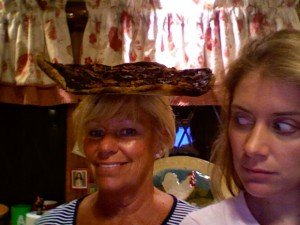 The following interview is with Ginny Sue Gohmann, reflecting on her life at age 35, interviewed by daughter Johanna Gohmann.

Where did you live?
Where we live now. I lived in Indiana, on Silver Hills. I had your sister and two older brothers, and you and Marty. And Ted was just baby. So there was a lot of kid stuff around, obviously. The house was filled lots of shoes and books and toys…it was very colorful, and I liked it. There was lots of baby stuff sitting around. High chairs, diapers … stuff like that. But it was always neat and clean.

What was a typical day like?
I got up at 6:30 and got the kids up for school. I ironed everyone’s school uniforms, fixed breakfast, and then took care of the baby. I got him up, and got everyone off to school then dressed him and fed him and took care of him. Then I cleaned house, and my mother usually walked over.  The two of us would go and pick the kids up from school. And then I fixed dinner. I would clean up the kitchen while my husband gave the kids a bath. And then I passed out. Ready to do it again the next day.

What did you worry about the most?
I worried about something happening to one of you … the kids being sick or something happening. Lynne Anne had died … my oldest daughter had passed away at 5 years old. And I was just … I think that was my greatest concern, trying to keep you guys safe and healthy. Just taking care of you guys.

What did you think the future held for you?
I was always very content. I didn’t think much about the future. I had just had another baby, so I was very happy. I loved having the kids and I loved taking care of them. I was very contented doing that. My life was very full and very active. I was very busy at your school. I sewed costumes and I cooked and I was just very happy with the children. I did not look ahead and think, “Oh yes, I’m going to have three more boys.” I did not think that. But I was very happy. I’ve always been very happy with the kids. Their life made my life overflow too, because we had science fairs and book reports and things that had to be done. I was very busy, but it was a fun busy. I had a very good time. I did not dream into the future.

How do you look back on that age now?
This is going to sound silly, but it doesn’t seem any different than it is now. No, I don’t have a house full of little children, but I look at some of my children and I think about how old they are, and then think, “How can they be that age, because I think I’m that age!” I think I’m still 35. I don’t look back at that time and think that was then, a long time ago, and this is where I am now. It doesn’t seem like that was 30 years ago and I was somebody else. I feel like I’m still the same person. Hopefully smarter and hopefully wiser. Thankfully I still have my health … though my brain sort of goes around the corner every now and then. But I don’t feel any different. Every now and then I have a few aches and pains, but I had a few aches and pains then, too. When I was pregnant with my last child I couldn’t even move. So I’m probably healthier now than I was then. I don’t see that as a long ago time. It’s just like, this is now. Things are changing, but this is now.

Does it seem strange to you that I’m now 35?
That’s the only conundrum. It does feel very strange, and I have a hard time remembering that you’re 35. And that Moosie is 34, and that Donnie’s 37, and that Ted’s 32, and Gretchen’s 40 … because I think I’m that age. And I don’t know how we’re all going to get to be the same age at once. I still think of all of you as very young people. Which you are. But I think I’m right there with you. Which sounds kind of squirrelly I guess. But yes, I think of you as being a young girl. But then I think, “Oh, wait, she’s 35 years old!” And I realize you are a grown adult. I have to remind myself of that sometimes. That you are all grown people. Which helps me not tell you what to do all the time. And now I have to remind you guys that I’m a grown person. Because now you’re beginning to tell me what to do. And I don’t pay any more attention to you than you all did to me.

Thanks very much for doing this, Mom.
You’re welcome, honey. Oh, and I wanted to tell you, I was watching “Everyone Loves Raymond” last night. Because he now makes me laugh out loud. And I have one episode I want to tell you about when you get here. It’s about a turkey. So ask me.

From Johanna
By the time my mother was my age she was in the midst of raising six children—four sons and two daughters. She would go on to have two more sons, and I would grow up in a loud, hectic, hilarious home of six boys and two girls. I don’t currently have any children of my own, and I cannot quite imagine where one summons the energy and enthusiasm required to care for so many little people. I try to get my head around how my mom not only did it, but did it with such love and passion, and the mind boggles. When I think about the fact that she had also suffered the horrible tragedy of losing a child, but still managed to press on with her life with such joy and optimism and courage, I am filled with a special kind of awe. When I was child, she was an endless well of energy and laughter, and she is much the same today. The strength of her spirit is a tremendous inspiration to me. And I can’t wait to hear what happened with Raymond and that turkey.