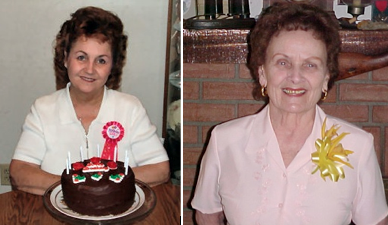 The following interview is with Ruth Crayton (age 93), reflecting on her life at age 69, interviewed by daughter Deborah Owen.


Where did you live at age 69?
My husband and I lived in a ranch style house in suburban Indianapolis. The city kept growing up around us and the country dwindled away. My husband used to point at the fields and say, “One day there will be housing developments or apartments over there.” Today, there are.

What was your typical day like?
I was the grandmother of six. My husband was retired so we sauntered through life piddling around. Eating out was our big thing, but you have to remember it was 1987, and fast food restaurants weren’t perched on every corner like they are now. We liked Steak n’ Shake and MCL Cafeteria and on occasion we burped on a White Castle. We went to White Castle when we were dating, way back in 1918.

What did you worry about most?
We really didn’t have any specific worries as long as the family was safe and sound. Money was tight, but it always had been. We were used to that.

What did you think the future held?
I thought we’d watch our grandchildren and great-grandchildren grow old, but reality busted our balloon. Paul (my son) was 49, and you were 45. Paul was by far the healthiest person in the family. Other than asthma, he was never sick a day in his life, until the headaches started. We didn’t think too much about it at first. Everybody gets headaches, right?

He was a few pounds overweight and carried a middle-aged tummy paunch but was otherwise in great shape. He couldn’t handle the thought of a 50th birthday so he said, “I can’t help turning 50, but I can and I will be the best looking, most physically fit 50-year-old man in the state of Indiana.”

Up to that point in time, the word cancer had never darkened our doors. He collapsed at the bank and the whole family met at the hospital to await the results of the CAT scan. The doctor gave him three to six months to live. No one spoke. We just sat there.

Grandparents died. Parents died. Neighbors died. Friends died. But it wasn’t natural to watch our child die. Four months later we stood over his grave. He never had to face that 50th birthday. Later, his father-in-law said, “If you lined up every man in the state of Indiana and tried to guess who would die last, Paul would have been at the end of the line.”

How do you feel when you look back on that age?
I don’t know how I lived through it. I think the shock of Paul’s death weakened my husband’s constitution. Within 18 months, Ray developed cancer and in another 18 months, I stood over his grave.

You wake up with grief, you eat with grief, and you sleep with grief. Your body produces more tears than the ocean. You live in the past and wait for your loved one to walk through the door.

Grief is a hole in your soul. After a period of time, you learn to walk around the hole, but you instinctively know if you stare into the pit, you’ll go stark raving mad. If not for God, I wouldn’t have survived it.

From Deborah
Paul’s death was hard enough, compounded then by losing Dad, but the hardest part of all was losing Mom while she yet lived. She was in shock for 10 years, and I missed her so much. All she talked about was Paul and Dad. I wondered if she would have grieved like that for me. I used to tell her, “You still have one living child,” and for that moment she returned, but only momentarily.

Two years after Dad passed, Mom found her childhood sweetheart through a chance meeting, and they married a year later. (He died of cancer six years later.) She grieved for Paul for ten years, grieved for my Dad another ten, and still grieves for the past daily.

Then one day in 1997, she said, “God took my grief just like that (snapping her fingers). It was like shutting a water faucet off.” I remember saying, “God could have shut it off sooner if you had let Him.”

I still maintain that to a point: Grief is a choice. But as I write this, I suddenly realize my daughter is now the age Paul was when he died. I can’t imagine life without either of my children (let alone losing my husband, too), but that’s what Mom had to deal with. She was the first writer in our family and she spawned six more. Today she is 93 years old, and she has breast cancer.