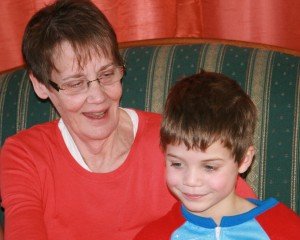 The following interview is with Linda Jones (age 63), reflecting on her life at age 34, interviewed by daughter Rayne Devivo.

Where did you live?
Same place we do right now. Your dad was working for someone, and the pay was regular, so I started managing the bills because we had lights off and gas off and that sort of thing. I’d only been managing the money for a matter of months when the apartment house we lived in was sold. We bought the first house we saw about a block-and-a-half away from the apartment house. Even though the neighborhood was sleazy, we liked the schools, Meadows and Woodrow Wilson. And that house was $10,000 and the payments were $99 a month for 15 years. There we’ve been ever since. I still walk in the back door a listen for the hum of electricity.

What was a typical day life?
I had two four year olds and a ten year old, so my typical day was preschool. I participated eight times a month because I had two kids there, and it was a co-op. I cooked and did laundry and I still had a ringer washer. I also went to exercise classes. It’s the one thing I ever did for myself. I read incessantly and the TV was always on whether I watched it or not. I always kept up on the news and was well informed when I wasn’t working. I did all child care. In the summer, we went swimming every single day it wasn’t raining.

What did you worry about most?
Money, drunk husband, putting food on the table. I had $150 for everything each week. I made all my own clothes. I had two pairs of pants and four shirts. I made all the kids’ clothes until your brother got too old to wear homemade clothes and sewing became just as expensive as buying clothes.

What did you think the future held for you?
I thought I might have to leave your dad. If he didn’t stop drinking by the time you girls were six, then I was leaving. I didn’t know what I would do; at that time I didn’t have my second degree. I thought you girls would be at school and I would be working and get out of it. I had a timeline. I told your dad, “There’s help on the front page of the phone book and it’s free.” He got sober when I was 35 and he was 36.

How do you look back on that age now?
As very, very young. 34 is very young and I probably should have done more for myself sooner. I didn’t feel so young, but now I look back on it as a very youthful age.