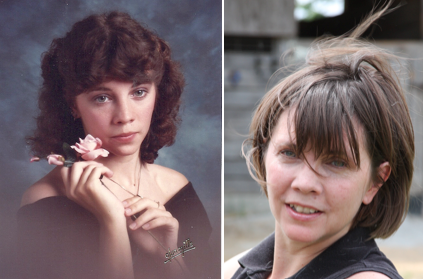 
From Judith
Throughout my life, my mom has been many different things to me—a mentor and a role model, a friend and a confidant. From the loss of Grammo, to the social and academic pressures of high school, and to the changing of friendships that seemed so steadfast, my mom has been a rock, supporting me in every effort and encouraging and allowing my relationship with God to blossom.

While I thought my mom and I talked about everything, through this interview I realized I was wrong. Before this, I had failed to ask my mom about her life, her experiences as a teenager, and how that could be a pathway for me.

As I asked my mom these questions, with Ryan Seacrest raving about record votes in the background, I felt something like nostalgia for both my own childhood and aspects of the world my mom grew up in. Images of my mom as a teenager running through trails behind her neighborhood blended into images of me exploring the woods behind my barn on horseback.

I have always known that I look strikingly like my mom did through childhood and teenage years, and through this interview I saw that the similarities ran deeper. Our happiness and sadness stem from the same things, and lessons from Grammo (my great-grandmother, her grandmother) still run deep in both of us.

Where did you live?
I lived in a neighborhood in Hanover County out by the airport. It was one of those first subdivisions built on a big ol’ farm. Now, there are very few farms left out there. What I loved about it was that our little neighborhood was surrounded by a few thousand of acres of woods.

There were trails that connected to the other neighborhood and three lakes that would freeze over in the winter. We’d hike through the woods, climb trees, ride bikes and dirt bikes.

What was a typical day like as a teenager?
Well, I’d get up early enough to drive the 20 miles to my high school for my 8 o’clock U.S. government class. All my classes ended by noon when I was a senior. I worked full-time at McDonald’s, and after school, I’d be working by one or two in the afternoon, with all of my closest friends. Most nights I worked until midnight, except during play practice, which started at four. I would do my homework late at night or on break from work.

What did you worry about the most?
I worried about money, because I had to buy all my own stuff. My own car, insurance, gas, phone line, clothes. I should have worried more about college and grades, but that didn’t come until later. Around my senior year, your Grandpa Bruce was diagnosed with a brain tumor. I worried about that, and stayed busy to block it out. I worried about people liking me. That has always been a worry of mine.  The other thing I worried about was war. My mom kept an emergency food box with canned goods and a can opener in the front closet, basically, in the case shit ever went down. I think that contributed to the constant worry of war.

How do you look back on seventeen now?
You know, when I look back on it now, I actually feel really proud of everything I was juggling when I was seventeen. It’s true, I wasn’t the most studious person, and there were times when I was kind of … bitchy. But there was a lot going on in my life, and at home with my family. Even though I wasn’t a great academic person, I worked really hard at my job. And even though I get really nervous in front of people, I excelled at drama. I found a way to make my place in a high school environment. I’m thankful for my friends and my job at McDonald’s. I worked there for three or four years, and I think it made me a nicer person. I learned that being kind and warm to someone can change a person’s day.

What was the most memorable current event and how did you react to it?
The current event that I remember the most from my teenage years was when Americans were taken hostage in Iran. That cost Jimmy Carter his reelection and I loved Jimmy Carter. I was a devoted to my president from the get-go. In fact, I got my Presidential Fitness badge because he was president. There was a song on the radio, a parodic song set to “Barbara Anne” called “Bomb Iran.” The whole country wanted to bomb Iran, but Jimmy Carter wanted to get the hostages out peacefully.

What was your love life like?
I had a pretty great love life to tell you the truth. You know, I think I definitely enjoyed being young and in love many times. I just have a lot of sweet memories of having some wonderful guys in my life. I had some really romantic experiences, drag racing down Broad Street, making out on a park bench in Florence, Italy, staying up all night talking, eating pancakes at HoJo’s at three in the morning, listening to good music in a cornfield! Yeah, my love life was pretty great when I was your age, and it’s even better now, but we won’t go into that.

What influence did Grammo have on you when you were my age?
Did you know when I was a tiny baby, I had pneumonia, and my grammy took care of me for a month while I recovered? There has not been a day in my life, even since she’s passed, that I have not felt her love and support and encouragement. When I was your age, I was pretty confused and unfocused, and I thought about joining the military.

I didn’t know that. What branch?
The Navy, like Granddaddy. Later, I even considered becoming a nun. She kind of freaked out about the nun thing more than she did the idea of me joining the Navy. Here’s the thing: my grammy and Granddaddy believed in education, and I can truly say because of them I went to college and finished college. One of the things that I’m happiest about is that Grammo moved here when you were little and lived long enough for you to know her and have your own relationship with her.

I still think of Grammo all the time. Just so many memories: cooking, picking blueberries, going to Imperial Plaza and watching soap operas. I think having a great-grandparent living with you just changes the house and the family. Having Grammo so close and sometimes living with us, she was just such a strong woman and that gives me strength. I still hear her telling me all her stories about Wren, and their farm, and the Great Depression.