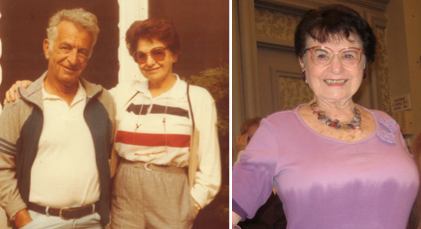 The following interview is with Evelyn Schwartz, interviewed by daughter Laura Cerwinske (age 63).

From Laura
I am now 63, and in 1985, when my mother Evelyn was my age, she was still working as a public elementary school reading teacher.

What was your typical day like?
I awoke at six-o-clock, went for swim, took a shower, dressed for the day, prepared Bob (my husband’s) breakfast and my lunch (a sandwich, tomato, and apple), carried my books, papers, and folders to the car, and drove to school.

I made sure to get there extra early so I could write the lessons on the blackboard before the kids arrived. (My students were difficult kids, the discipline problems and the underachievers. I couldn’t afford to turn my back on them when they came to school.)

After several hours of teaching, I had lunch in the teachers’ lounge, and when I returned to class, I would read or tell a story, complete the school day’s lessons, then stay after school to grade papers or go to faculty meetings.

I was always proud of my bulletin boards, and often stayed on to create the month’s newest theme. One of the nicest compliments I ever had was from the music teacher: he told me my classroom was the most creative of all he’d been in.

I usually brought home a lot of work because I couldn’t get much done in class. After preparing and serving dinner, I graded papers or contacted parents or whatever the school day required. I know I brought home more work than the other teachers.

If I had the energy, I’d watch TV with Bob before going to bed.

Laura: Evie is nearly 90 years old now. She still lives in the house that our family moved into in 1961 from our original house, where Rick and I were born and raised. The “new” house was/is her lifelong dream-come-true—open, sunny, custom built in a new suburb, with a pool overlooking a waterway and big rooms with sliding doors that open onto views of the waterway. Evie has lived here on her own since my father, Bob, died eight years ago, but she remains almost as busy she ever has been, teaching reading skills in her home office, attending her many literacy and Jewish organization meetings, and entertaining her beloved girlfriends and relatives. As a child, I found Evie’s list of professional activities and social obligations not simply daunting, but formidable—how was an introverted child with unconventional passions and a vast plague of insecurities supposed to find a place on it?

What did you worry about most?
My biggest anxiety in those days was what to make for dinner before I went grocery shopping on Friday. After growing up with the privations of the Depression, I learned to live life day by day, to say my prayers at night and hope things would work out well. Bob and I felt that everyone in the family was coping in their own way, handling their own problems, and seeming pretty independent. No one came crying on our shoulder.

What did you think the future held for you?
Who had time to think about it! I was always optimistic. Life takes you on its course: You finish one phase and move on to the next.

How do you look back on that age now?
I look back on all of it with satisfaction. We did the best we could do. Compared to the Depression years, the later years were not filled with anxiety because we had a steady income.”

From Laura
During this era, when Evie was 63, I was 37 and had recently (finally!) moved into a nearby house with my six-year-old son after our living with Bob and Evie for several years following my divorce.

This house (near enough that my son and my father could still see each other daily) was my dream house—dim and cozy, on an acre of pines, with a fireplace and cedar-lined closets. I’d always been a little house-mouse, reluctant to leave home or go out and socialize, and moving into this wooded nest was the perfect balm to my shredding confidence.

I was supporting my son and myself (insufficiently) as a freelance writer while struggling with clinical depression, anorexia, extreme PMS, and migraines—the typical distress list of overwhelmed single mothers. In addition, my son’s attention span was as depleted as my income, and the school reports on his conduct and performance were mortifying. I could sense that his aggressive behavioral momentum was unstoppable, but I kept delving, seeking, applying whatever knowledge and strength I could garner to learn and simply cope. More than anything in world, I wanted to sleep.

As a kid, I truly hated school—the hours, the routine, the incomprehensible social structure, the fears of getting roughed up, the unbending authority, the monotonous texts, the patriotic pabulum, the unopenable windows. Being an honor student made no difference.

Each morning, Evie, the robust, unstoppable, perpetual motion machine, would wake me with a cheerful bedside recitation of: “Here is now dawning another new day. Think, woulds’t thou let it slip useless away!” Even then, the only place I wanted to slip was deeper under the covers.


I still sleep a lot. Evie still swims every morning. I survived public school, single motherhood, a parade of predatory men, and the vicissitudes of a writer’s career.

Evie flourished and continues to flourish among her books, students, Jewish philanthropies, literacy efforts, lifelong friends, and relatives. She loves the life she created for herself, and I have grown to love it for her. I praise her lists of plans and teaching activities as well as her extraordinary good health. What had been a cursed agenda for this daughter in youth is a blessing for that same daughter in late middle age.