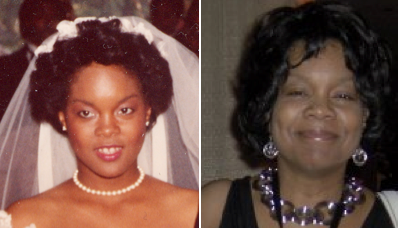 The following interview is with Andrea King Collier (author of Still With Me: A Daughter’s Journey of Love and Loss), who is interviewed by her daughter, Nicole Collier, a broadcast journalist. Andrea is 54 years old, and Nicole is 26.  Nicole is getting married this year at the same age that Andrea got married nearly 30 years ago.

Where did you live?
I lived in Belleville, Michigan, with my boyfriend/fiancé (your dad). I had moved there from Miami to be close to him. I had a great single life living in Dallas, Atlanta, and Washington, D.C. We got engaged that Christmas. Just before we got married we moved to a little house in Detroit. Belleville was kind of rural.
What you did for work? What was a typical day like?
In 1982 I was a pharmaceutical sales rep. Believe it or not I had drugs that were anti-psychotics and drugs for migraines. I was doing the rounds with my boss once and a doctor told me that he remembered the days when the company I worked for made LSD. I laughed. My boss confirmed that it was true. And I couldn’t stop laughing. One of those nervous, uncontrollable laughs.
It was pretty clear that I wasn’t really cut out for that kind of work. It makes me laugh now just thinking about it. But I had a company car and I didn’t have to sit behind a desk. Yet going to doctor’s offices, reading off brochures about drugs made me feel that I wasn’t living up to my potential.
I had a degree in journalism, and in my soul I wanted to write. But journalism school scared the writer out of me. Someone, one of my professors, told me that black folks weren’t cut out to be journalists, and that I was wasting my time. I didn’t know anybody I could ask. So I believed it.
But later I would find out that you have to do what you are meant to do. You won’t be great at anything or have real joy in work until you get with that. My true authentic self would literally haunt me to put words on page.
But every year I would put it off, including that year. I wouldn’t figure that out and commit until I turned 40.
You were persistent, even when it was hard, and you had to live at home to pursue the television job.
I just gave up—at least that was what I thought.
What did you worry about most?
I was worried about getting married. I was worried about a wedding. I was worried about the marriage after the wedding. There is no manual to tell you how to do that. And even though we had lived together, I had no idea of what to expect out of marriage. What if it didn’t work? So I made little silk flowers and calligraphied invitations to give myself something to do besides worry.
What did you think the future held for you?
I didn’t know. I most certainly couldn’t have imagined this work or this life. I imagined that we would get married, have a couple of children (which we did), and I would work, maybe go to law school. I was floundering professionally. I figured it would work itself out. So I concentrated on my new life with my new husband.
What do you think about that age now?
Some people look back on their 20s and think about reliving them and wishing they could recapture this. Not me. It was good. But it was just the beginning. It was the beginning of my own little family. It was the beginning of being an adult and making adult decisions.
And it was the beginning of learning how to live with another person who came fully formed with ideas and values and family. Wouldn’t change it and wouldn’t go back.
I appreciate that time gives you lessons and makes you smarter. I love that I took chances and made leaps and mistakes. I didn’t have a sense of humor. Everything was intense and important. A sense of humor is the magic bullet.
Share this
Posted in When Mom Was My Age.