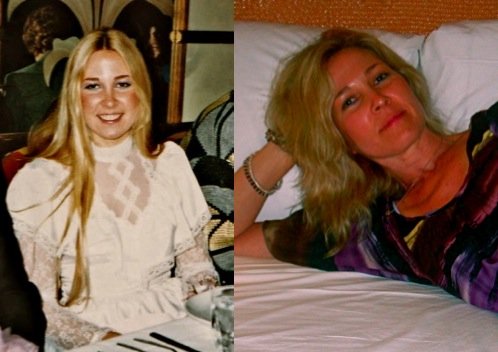 From Chantel
When my mother and I catch sight of each other, when we pass through hallways or doorways across the house, we pause, and we wave our hands and fingers under our noses in slow motion, like elephant trunks groping for objects unseen. This is Snuffleupagus. The Woolly Mammoth from Sesame Street? I don’t remember how it even got started, but it is a thing. People think she’s my sister.
I hate how she sometimes presses her tongue against her upper front teeth from behind and sends air through. Tsssk. I hate her needing to settle down already—most of our notional fulfillments butt heads, hers “old world,” mine “new world.” But this woman sewed me a lion costume overnight when I was in seventh grade, just because I mentioned on the way home from school how cool it would be if I wore one to the pep rally the next day. She has always been there for everything, doing everything. She reads my stuff even though she doesn’t otherwise like to read, maybe a Danielle Steel, maybe a health book. My mother, I love her.
–
State your name please.
Peggi Colleen Gibson Tattoli
Also known as House Elf.
Also known as House Elf. Also known as Betty Builder. Also known as Moo Bear. (Laughing.)
I’m twenty-two. When you were my age, where were you living?
I was living in the same house I was born in. It was in a little, south suburb of Chicago. Bridgeview. My parents still live in the same house.
Where did you work? What was a typical day like?
I didn’t work. Well, I worked part-time at Midco, which was an electrical supply place, but as soon as I met your dad, at the age of twenty-two, he made me quit work so I would be free to fly back and forth to Florida at any given time and didn’t have to worry about work. So, I met dad in May, I quit work in July and flew back and forth until November, and then, end of November I moved down here and we married in December.
A lot of time spent in airports that year.
Uh huh. A lot. Sometimes just long enough to fly down and have lunch or dinner and to fly right back home again, never left the airport.
Because you weren’t allowed to.
Because I wasn’t allowed to. (Laughing.)
Around that time, what was the thing you worried about most?
That I wouldn’t have a family. I wanted to have kids so badly, and Gaga [my maternal grandmother] had a really hard time getting pregnant. I was afraid I wouldn’t be able to have a family after all.
What did you think the future held?
Well, I was hoping that it held children and a great life with your dad. And health for my parents, that they would live long enough to see you guys grow up. You know.
You’re starting to cry!
(Laughing.) That’s not going in!
That’s going in! So. You’re, what, forty-seven?
(Wincing, pursing lips.) I’m thirty-seven.
Thirty-seven. Right. How do you look back on age twenty-two now?
I wish that I wouldn’t have been so, um, afraid. Of what people thought of the way I lived my life. I wish I’d been more free, unafraid of what people…
Which people?
Family members. You know, I wish I would have not cared. Not…not to have stepped on anybody’s toes, but of just…
Gaga and Papa, or?
Gaga. And associates. And Grandma Julie [my paternal grandmother], Grandpa Don [my paternal grandfather], because they were always watching, always watching and criticizing. And you know, I felt like I had to live up to an expectation that sometimes I didn’t want to live up to.
I’m off to grad school. Dustin’s at college. Chiffawn is sure to soon follow. What next?
I hopefully will be filling the house with grandchildren! That’s what my next season in life will be.
No pressure.
No pressure. (Her laughing.) But you better hurry up. (Her laughing.) But, until then I might want to do the esthetician thing to get out of the house. Travel around with dad, but he hates to be away from his work for very long. So probably, maybe just select hours as an esthetician, which I recently went back to school for, and then, when the grandbabies start coming, I’ll do that!
Why do you say worsh?
Because everybody from Illinois puts in an “r.”
Who was the first president of the United States of America?
George Worshington.
Why did you always tell us you couldn’t swim?
Because I have a fear of water. And I didn’t want to have to get in the water and let you guys know I had that fear. Now you’re just grilling me.
Okay, okay. Who was somebody really popular when you were my age? Someone you liked.
Madonna.
Still like Madonna?
Yes, actually. I do.
Why?
Because, at the time, she was someone who stepped over boundaries, in a big way. Like Cher when I was even younger and her body-bearing costumes and sense of humor. And Madonna still looks great for her age.
Like you!
(My mother rolls her eyes and sticks out her tongue.)
Share this
Posted in When Mom Was My Age.