Today’s guest post is excerpted from Writing as a Path to Awakening, by Albert Flynn DeSilver (@PoetAlbert). Sounds True, September 2017. Reprinted with permission.

There’s a term thrown around in the world of writing that I’ve never fully understood: emerging writer. To emerge as a writer, or anything else for that matter, you must emerge from one thing into an entirely different something else—that is, you must move from one state of being or existence to another. As a writer, that only happens through practice.

What it takes to go from emerging to emerged is a shift of perception followed by consistent action. It’s like being a couch potato, becoming a couch surfer, and eventually transforming into a couch creator. You’re dealing with couches in one way or the other the whole time, it’s just that you’ve swapped the bowl of potato chips for a laptop or your favorite notebook and pen. Sometimes it really is that simple. You go from the idea of writing (one potato, two potato, crunch, crunch)—that is, fantasizing about writing “one of these days”—to actually signing up for that fiction class, poetry workshop, or writing retreat. You take in the inspiration, knowledge, and motivation you get from that and then, finally, sit your butt down in the chair (or upright on the couch, chips back in the sealed bag and locked in the cabinet) every day for the next year (or ten) and write the damn thing. For the record, I write on my couch every day, without chips. But heck, as long as you’re writing consistently and you’re capable of multitasking, crunch away!

Emergence means sticking with the practice long enough until you’ve experienced a sense of improvement, growth, and even transformation. Sometimes this takes minutes, sometimes years. Emergence is also about taking time to connect with your deeper self, touching into your creative desires and true intentions, and exploring the hidden layers of yourself that call out to be expressed. The timing for when we emerge, or when the writing emerges from within us, is a highly personal one and ultimately a decision that we shouldn’t put off until some nebulous future moment—not if we sincerely want to write. In other words, stop thinking and start writing.

I thought about writing for years and wrote nothing. Then I wrote in fits and starts. Then I wrote obscure (mostly) experimental poetry for fifteen years or so, which was fun and interesting and I learned a lot about craft in the process (heck, I even finished countless writing projects and published several small books along the way). And yet I was still writing only on occasion, still emerging. If I’m honest with myself, I was writing around my vulnerabilities, avoiding the deeper emotions, the truer story lurking within—until I couldn’t take it anymore. I had become so haunted by childhood scenes and memories—some difficult but compelling images—that begged to be written down. Something bigger was gnawing at me, yearning to emerge. Around this time my friends and neighbors recommended several memoirs that inspired me to give it a shot. I mean, these books virtually shouted words of insight, encouragement, and permission. The next thing I knew, I was writing a memoir.

Emergence is about showing up, about materialization—going from the nonphysical to the physical—from the darkness and mystery of incubation to the light of manifestation. To move from scattered ideas, broken dreams, and those frustratingly inconsistent false starts to solid discipline and completion, we need to first shift our thinking and then adjust our physical behavior—literally how we interact with the couch (or wherever it is we can finally get some writing done).

If you truly want to write—if you feel genuinely curious about this writing business and your potential to take part in it—you have to make time to do it, and that means you need to set some kind of schedule. I recently surveyed thousands of writers and would-be writers who are on my mailing list, and the number one thing they reported struggling with the most was time. Remember, time is not something that you have or don’t have—time is something you create. What are your priorities? What could you shift or tweak in your daily life to create some space for your writing? You have to make time to write if you are sincere in your desire to manifest your writing dreams. And if you are just too darn busy with work, kids, and life, then make your writing a kind of squeezing-in practice: squeeze it in on your lunch break, in the car while waiting to pick up the kids, in the morning, with your favorite flavor of caffeine coursing through your veins, by waking up fifteen minutes earlier than usual. If it’s important, you’ll find the time. I know writers who rent motel rooms for occasional weekends of concentrated binge writing, and one who records voice memos (that eventually grow into novels) while she’s stopped in traffic during her daily commute.

You’ve heard it over and over again, that annoying little adage about writing being a practice. The thing that often gets left out of the conversation around practice is how unappetizing the initial idea of practice actually is. You can hear the nagging parent or teacher in the back of your head, “Okay, Mary, it’s time to practice your scales,” when you’d rather be hanging out with your friends playing freeze tag or rearranging your sock drawer. Practice. That word voiced in our heads sometimes echoes ominously like scolding thunder; it seems to come with built-in resistance. Who wants to practice? It can sound so arduous and even unappealing, like a chore that needs to be completed. 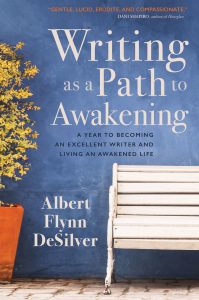 But the key aspect of practice that we often forget is the discovery and enchantment we get along the way. After giving myself to the practice of writing for more than twenty years, I know the more I practice, the more I learn not only about the art itself but also about my own quietly evolving heart and mind. I learn more about consciousness itself. It’s fascinating, really. It’s not so much that I, Albert, am so fascinating—it’s that we as humans are fascinating. You are inherently interesting beyond compare, and you will become even more so when you take the time to delve deep and write forth your inner truth.

Note from Jane: If you enjoyed this post, I highly recommend taking a look at Writing as a Path to Awakening by Albert Flynn DeSilver.

A highly regarded and sought-after speaker and workshop leader, Albert Flynn DeSilver has taught and presented with several luminaries, including Elizabeth Gilbert, Cheryl Strayed, Maxine Hong Kingston, Michael McClure, and U.S. Poet Laureate Kay Ryan among many others. In addition, Albert is an internationally published poet, memoirist, and novelist. His writing has appeared in over 100 literary journals worldwide. In addition to Writing as a Path to Awakening, he has published several books of poetry and the memoir, Beamish Boy. Albert teaches at the Omega Institute, Esalen, Spirit Rock, and writing conferences nationally. He lives in Northern California. For more information, visit albertflynndesilver.com.