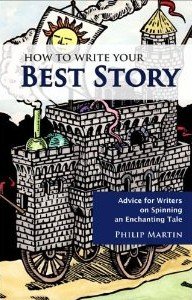 The following is excerpted from How to Write Your Best Story by Philip Martin. It may seem to address a simplistic question, but I must agree with Steven Spielberg when he said, “People have forgotten how to tell a story.” So I hope you won’t be too proud to remind yourself what storytelling is all about.

A writer, said Isaac Bashevis Singer, is basically a storyteller. But what is a story?

According to Randall Jarrell, a story is first of all a chain of events that begins at one place and ends at another “without any essential interruption.”

Mark Twain agreed. His first rule of writing was “that a tale shall accomplish something and arrive somewhere.”

So, a story goes somewhere. It follows, with purpose, one or more characters through a series of events. By the end, it arrives at a target destination, fulfilling its reason for having been told.

If the string of events is fairly neutral and straight-forward, we might call it a narrative. A narrative might not be more than a sequence of things that happened, one after the next.

If a narrative is basically what happened, a story takes it to the next level. It creates a structure to seek and hold far more significance.

When a story takes shape, we’ve taken that string of events and invested it with meaning. What was important enough to shape into a story … and to tell others about it?

Story is how—long, long ago—we learned to take the confusing flow of many things that happen and try to make sense of them. A story is a fundamental way that humans organize and store information.

We do this whether or not such meaning actually existed on its own. Regardless, we shape it, through our selection of elements that link chosen events into a story. We desire meaning, and will likely try to create it whenever and wherever we can.

According to Ursula K. Le Guin, writing in The Language of the Night, “The story—from Rumpelstiltskin to War and Peace—is one of the basic tools invented by the mind of man, for the purpose of gaining understanding.”

When asked how to develop intelligence in young people, Albert Einstein was reported to have said: “Read fairy tales. Then read more fairy tales.”

Let’s look more closely at what it means to rise beyond narrative into the realm of story.

Going Beyond Narrative and Beyond Plot

The magic of story lies in what happens during that stream of forward-moving narrative events. A storyteller, said Jarrell in his Book of Stories, “writes numbers on a blackboard, draws a line under them, and adds them into their true but unsuspected sum.”

That unsuspected sum is the special mathematics of story. Story imbues meaning to words and events. It also connects us in a very simple way, as listener and teller.

As Ursula K. Le Guin noted in her book of advice for writers, Steering the Craft, plot is not the same as story. “[P]lot is merely one way of telling a story, by connecting the happenings tightly, usually through causal chains. Plot is a marvelous device. But it’s not superior to story, and not even necessary to it.”

Instead, she points out, story can flow from just a character or two, a conversation, a situation.

The misguided focus of many writers on plot may overlook the most basic role of story: to delight us and draw us into it. We might compare a story to a wonderful meal. The success lies most of all in ideas of flavors, spices and herbs, searings and simmerings, the presentation of wondrous things. It also involves the pure enjoyment of those present sharing each others’ company for a time, with the meal as the uniting factor. It really matters far less the exact order of the dishes.

Stories connect events and create meaning; they also connect people to each other.

A story is a selective batch of information. It selects details, arranges them, perhaps embellishes them. For instance, when describing a character, many writers agree that a less detailed description is often more rich to the imagination. I know would-be storytellers whose flaw is that they tell too much. You get the sinking feeling, as they launch into their narrative, that you are going to re-experience the whole experience with them, blow by blow.

Don’t re-live the entire event. As a writer or teller of tales, it’s your job to select only the details needed to make the story a good one. Someone once said a bore is a person who deprives you of solitude, without providing you with companionship. A poor storyteller does the same.

You want to communicate to your audience: Here’s the best of what happened. I’ve chosen from my bag of storytelling tricks the best way to tell this tale to delight you the most. Pay attention! Details I select will be important. Yet, I will leave room for your imagination, dear listener or reader, to come into play.

But: Spin Out Certain Threads

It’s the opposite of simplify. Embellish! Pick a few decorative threads to spin into a more sparkling web. It’s the opposite element to story’s tendency to focus or simplify itself. There is also a pure delight in the art of the tale, the tongue of whimsy, the gift of gab in an enchanting, charming way.

As Joyce Carol Oates wrote, “Storytelling is shaped by two contrary, yet complementary, impulses—one toward brevity, compactness, artful omission; the other toward expansion, amplification, enrichment.”

Storytelling is likely the oldest art, and may still be the most powerful one. Command of its magic has catapulted diverse authors like Mark Twain, Isaac Bashevis Singer, Eudora Welty, and Neil Gaiman to great success. They share the knowledge of how to spin a tale that holds us tight in its silky, strong web.

We all know that in its simplest form, storytelling involves three things: beginning, middle, and end. Unfortunately, this offers little tangible help. Yes, you start. You continue. Then you wrap it up.

But how can you do it better?

My advice in this book explores aspects that roughly correspond to each of the three main parts of a story. The tips and techniques you’ll find here won’t solve all your problems. But if all goes well, this small book will give you some fairly specific, implementable ways to improve your fiction.

Want to keep reading? Click here to order How to Write Your Best Story.

Philip Martin is the series editor of The New Writer’s Handbook, an annual anthology of advice for writers to help them improve literary skills and advance their careers. He maintains a blog for writers, as well as a blog on fantasy literature. He can be reached at Great Lakes Literary, where he offers editing, book-doctoring, and marketing help for writers and their book projects.