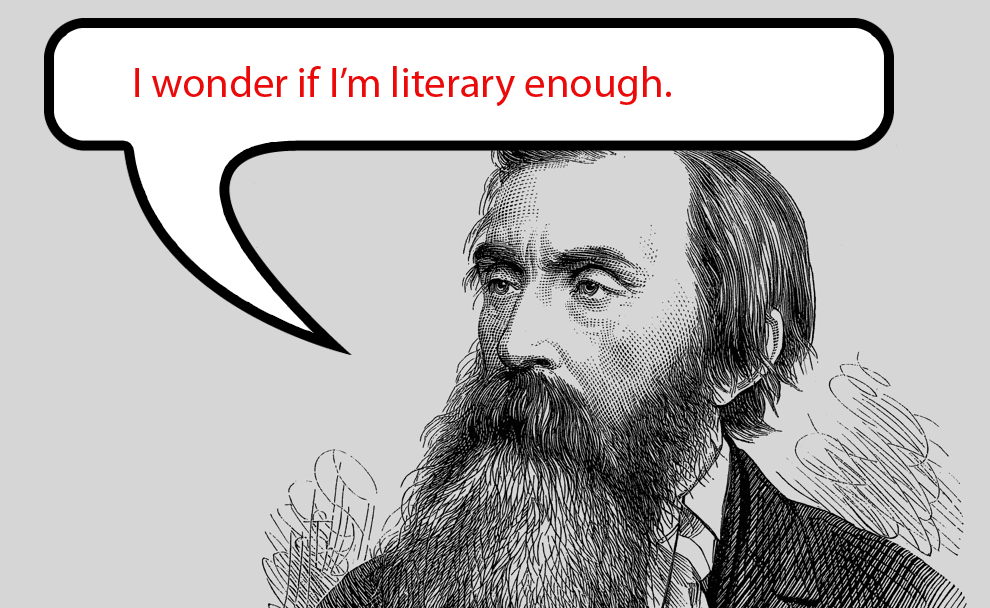 Today’s guest post is by Dr. Sanjida O’Connell, a literary author based in the UK. Her latest book is out in paperback, Sugar Island.

The Literary Novel. We all know one when we see it, although deciphering what it is or telling someone else how to spot one is problematic.

In a tautological definition, literary works are often defined as those that win literary awards, such as the Booker Prize for Fiction. Which would rule out any novels written before 1969 being classed as literary. Another definition is that this type of fiction is “writerly”—clearly nonsense since every book is, by definition, writerly—someone wrote it, after all!

Recently a number of critics, publishers and publicists have suggested that literary fiction is simply a genre, like crime or chick lit and should be marketed as such (to ever decreasing readers, according to April Line in her guest post here, Why Isn’t Literary Fiction Getting More Attention.

I am defined and marketed as a literary author, although I have never won the Booker. I didn’t set out to be in this genre, but now 15 years since the first of my four novels was published, I’ve been wondering exactly what it is that makes a book literary.

First, for me, is that it should be Intellectual. A literary novel is about ideas. It has an overarching theme distinct from the narrative and a leitmotif running through it. The theme of my first novel, Theory of Mind (perhaps too densely cluttered with ideas), was on the nature of empathy viewed through the prism of a young boy with Asperger’s syndrome, a sociopathic boyfriend, a robotics expert and the emotional life of a bunch of chimpanzees.

A.S. Byatt, who famously won the Booker for Possession and who “wept and wept” when her publishers asked her to remove chunks of Victorian prose and poetry, said that she had accepted her novel would only be read by academics and that she imagined she would certainly “fall into the intellectually challenging box.”

Linked to their intellectual side, I think literary works have Depth. Of course, novels with great plots usually have sub-plots too, but I’m talking about the interweaving of ideas, themes, plot, and sub-plots. My third novel, The Naked Name of Love, took me ten years from concept to publication and that, plus the Big Ideas (God, evolution and love), helped give it depth. My fourth, Sugar Island (out in paperback this March), was written much more quickly and I believe it has less depth. It wasn’t just the time it took to write but also the themes. Sugar Island deals with slavery, with freedom and free will, and because as a society we find slavery abhorrent, there is perhaps less to explore since the issues are so much more black and white for us than they were at the start of the American Civil War.

Critics often say that literary novels are about Character and commercial “mainstream” fiction is about plot. This seems a bit of a simplification. I do think literary novels should have fantastic characters, but the best books all have fantastic plots too. For me, in a literary work, the plot stems from the characters. The main character behaves in a particular way because that is who he or she is and it is their key character traits that drive the plot. Thrillers, for instance, can often have a plot that is external to the character. I’m exaggerating, but in this genre almost anyone could be the “hero” and go through the same process. Dan Brown’s The Da Vinci Code is a classic example of a pulse-quickening, page-turner, but would seeing into Robert Langdon’s soul help move the plot along?

And last but not least is Style. I think we all expect a classic novel to be written in such beautiful prose it makes you want to weep, pause and stare at the sky or feel the words rolling through your mind like pebbles smoothed by the sea. Again, this is not to say that novels in other genres do not need to think about style but the prose can be more workman-like if plot is the driver. Take Stephanie Myers’ Twilight Saga. Supremely popular, these books do not fit into the literary fiction category. They do have interesting characters, they contain ideas (about the nature of vampires and vampire-human hybrids), they reference literature (Tennyson, Wuthering Heights, Romeo and Juliet), but they are predominantly plot-driven, the prose is on the workman-like side, the characters are not deep and the books lack depth. They’re still a great read.

So what I’m saying is literary books are not better than any other type of book and elements of what makes literary fiction literary are found in most novels. But if literary fiction is what rocks your world, then go for Wuthering Heights.

How do you define literary fiction?

Dr. Sanjida O’Connell is a writer based in Bristol in the UK. She’s had four works of non-fiction and four novels published: Theory of Mind, Angel Bird (by Black Swan), The Naked Name of Love, and Sugar Island (John Murray).