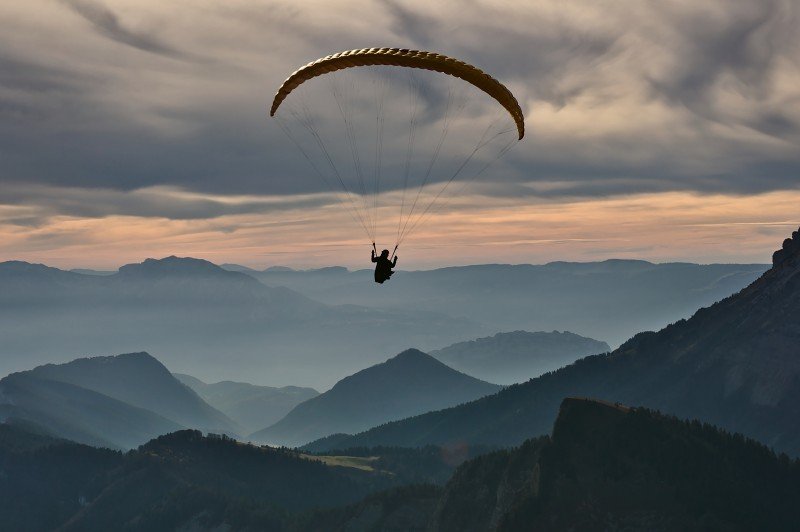 Note from Jane: In 2014, I made the leap from conventional, full-time employment to a full-time freelance career. On the one-year anniversary of that transition, I wrote a feature about it for Writer’s Digest magazine, detailing my earnings to the dollar. In honor of the release of my new book, The Business of Being a Writer, I’m re-publishing that article here today, with those first-year earnings.

Here’s the truth: I never had a freelancing dream. I was happily and continuously employed for 15 years after college graduation. Yet as I grew in experience and knowledge, I found myself increasingly at odds with the red tape and inevitable office politics that come with even the best of jobs. I started to wonder if I’d do better and be happier on my own.

Even though I’ve spent most of my career working in the publishing industry, I doubted my ability to build a sustainable freelance life. There are so many negative messages surrounding freelance careers—how hard it is, how you have to be prepared to hustle, how it’s more competitive than ever, and let’s not forget: the great masses are all trying to write and will do so for free.

I internalized those negative messages. I thought about all the reasons I would fail: I don’t like pitching, I’m a terrible networker, I procrastinate, and I’m not willing to work long hours.

After several years of weighing the pros and cons, I made the jump, with all my fears intact. (The fears never really go away.) Now I’m one year into my freelance life, and I’ve beaten my previous annual income by more than 50 percent.

Your motivations or desires to freelance might be different than mine, but the process of transitioning away from conventional employment will raise similar questions and psychological barriers. While I was positioned to do well given my career history, it was by no means a golden ticket. Someone else with the same set of experiences and connections could find themselves empty-handed and struggling (and in fact I know of some who are). So what laid the groundwork?

Here’s the good news: You don’t need all three of the following assets for a successful freelance career. You can focus on one to begin.

Freelancers’ first clients often come from previous employers or an existing network. You tap the connections you already have, and build from there. Each job you successfully complete or each client you satisfy creates word of mouth. Each new editor you meet holds the seeds of new relationships with other editors. Former colleagues who believe in your work refer new opportunities your way. This is networking at its heart.

Writer Grace Dobush, who has been freelancing full-time for three years, says that the biggest thing that prepared her for success was networking. For example, she met her editor at Wired through calculated stalking: determining who at the magazine might be willing to meet her and then reaching out to editors, finally meeting one in person and developing a relationship with her. “You’ve got to create the career you want yourself, knitting together the relationships you create with the threads that interest you. No one else can do that for you.”

If you’re literally starting from zero, relationship building might not be the area to focus on, especially if you lack confidence in your writing skills or are still building your body of work. Even I personally don’t focus on building connections; instead, I try to draw people to me, which brings us to …

My biggest strength has been putting myself out into the community, continuously and consistently through online media. As marketing guru Seth Godin has said, “I think that showing up every day for 10 years or more in a row gives people a hint as to what it is you’re actually trying to accomplish.”

I’ve been blogging since 2008. I wasn’t very good at first, and even three years in, I considered my effort fairly average and a bit unfocused. I wasn’t particularly charismatic, witty, or a big personality—but I was attentive and genuinely wanted to help people. I said yes to every interview and guest post opportunity, even if it meant free labor. People tend to find me because of all my self-produced online work and the surrounding footprint through social media. When it came time to jump, I was visible to an audience I had built over years.

Today, I continue to help people and organizations in ways that don’t benefit my bottom line, to increase my visibility for paying opportunities. But you do eventually have to make difficult judgment calls on which opportunities really deserve “yes.”

Many experts advise writing or freelancing on the side until it overtakes your full-time work, to reduce your risk and experience a more seamless transition. Not everyone has the luxury of time, but if you do, then take small steps to build the assets just discussed, not to mention your portfolio. You’ll gain confidence and resources needed for freelancing—or you may realize that it isn’t actually the dream you thought it was.

When I initially started blogging and created my own website, I didn’t intend for it to pave the way to a freelance career. Rather, I wanted to build an identity that wasn’t tied to any particular company; I wanted to be visible to future employers and opportunities. The happy result? When I had only three months from the time I gave notice at my full-time job until I was fully independent, I already had four years of groundwork laid, if you start the clock from the year 2010, when I first put up my website.

Before writer and editor Ginger Moran went freelance, she took several years to explore the alternatives to full-time employment. She accepted side gigs coaching other writers, and took time to get her book and essays published. Then she added certifications as a life coach and creativity coach that rounded out her degree in creative writing. She reached out to mentors and advisors, and put all her spare time and energy into her future freelance life. “When it was time to leap, it was still scary, but it was worth the risk. I have never once for a single second regretted it,” she says

While you might have a specific type of desired work, assume and plan from the outset that you’ll accept many types of gigs as you build up the more desirable opportunities. This has been true for freelancer Andi Cumbo-Floyd. “Sometimes, I think we consider ourselves to have failed or sold out if we do things that seem less artistic or more commercial,” she says, “But those things allow me the space to do what I really love. If I need to write web copy and tweets to have that opportunity, I’m happy to do it.”

One income stream I’ve developed that I never quite expected has been editing queries and book proposals. Initially, I wasn’t sure how to offer such critiques while making it worthwhile for both me and the client, but eventually I found the right model—which still continues to evolve. Writer and editor Lydia Laurenson says that this evolution is inevitable. “After ongoing conversations with other independents, you will learn that these failures and pivots are okay, and you will start to see helpful patterns in them, but the fact remains that resilience to failure is a key quality.”

When I spoke to other freelancers about their transitions, fear was a consistent part of the equation. Dobush says, “Even the most successful freelancers have moments of doubt and are often on the cusp between making it and not making it.”

Looking back, I probably could’ve have transitioned successfully a couple of years before I finally made the move, but the insecurity of not having a regular paycheck prevented me, as well as fear of not knowing if I was suited to the freelance lifestyle.

After making the switch, what I discovered is that until you truly commit to giving up the day job, it’s hard to behave as a freelancer would because your head space, time, and energy remain consumed with traditional employment. You can be blind to the opportunities around you. At some point, you must leap and assume the net will be there. The great writer Johann Wolfgang von Goethe once wrote, “The moment one definitely commits oneself, then Providence moves too. All sorts of things occur to help one that would never otherwise have occurred. A whole stream of events issues from the decision, raising in one’s favor all manner of unforeseen incidents and meetings and material assistance, which no man could have dreamed would have come his way.”

I find that largely true, but be careful when asking other people if you should commit to freelance. By and large, people did not encourage me; mostly, they made me second-guess myself. Even when I announced I was leaving full-time employment, despite the majority of positive messages, I still received warnings, e.g., “You’ll go from a full-time job to a 24/7 job,” and “Welcome to the cliff. No parachute, golden or otherwise.”

Even after a successful first year, it still amazes me every month to see the money come in consistently. I’m really making that happen? I’m proud of the accomplishment but fear still lurks that one day the “magic” will run out. I’ve come to accept that feeling as part of my new job.

My First Year of Freelance Income (before taxes) 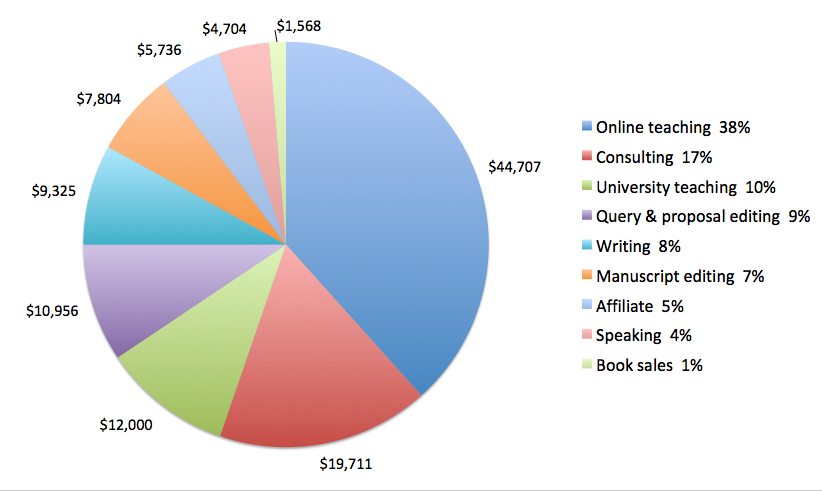 Some people may be surprised that more of my income isn’t from writing. Can I really call myself a writer or freelance writer? Yes. It’s common for even “full time” writers to make less than half of their income from writing.

How Has My Income Changed Since 2015?

Today, the lion’s share of my income comes from helping writers with their submissions materials and business consulting with individuals, businesses, and organizations. Online teaching is next, followed by writing. In 2018, it’s possible that writing work will become my second biggest revenue generator, partly due to the success of my email subscription newsletter, The Hot Sheet. Speaking is my smallest earnings category, which I hope to change by increasing my speaking fees. I stopped taking manuscript editing work and I stopped adjuncting at the University of Virginia.

Learn More About Making a Living as a Writer

Check out my book from University of Chicago Press, The Business of Being a Writer.