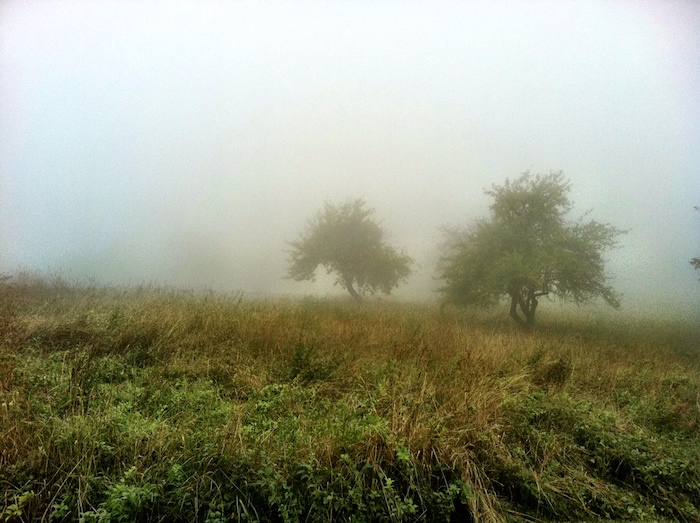 Note from Jane: Today’s guest post is by Nell Boeschenstein (@NellBoe); next month, I’m hosting her online course focused on the personal essay. Find out more.

Although the wisdom of it took me years to fully appreciate, the best writing tip I ever received branded itself onto my brain when I was an undergraduate studying poetry. One day, my professor—a tall woman with wild hair and a Louisiana accent—happened to mention that her best lines always arrived unexpectedly during walks alone around campus or with her dogs near her house outside of town. These lines rarely, if ever, she said, presented themselves while she was consciously writing. Rather, one minute her mind would be concerned with the grocery list and the next minute a fragment of imagery or insight would float through the antimatter of her brain on its way to oblivion. Ideas, she said, come as quickly as they go. It’s up to you as a writer to catch them while you can. If instead you put it off and vow to record a thought when you get home, nine times out of ten that thought will have dissolved into the ether by the time you remember to try to remember it. In other words, passing thoughts are precious things. I had my doubts. About both the preciousness as well as the possibility that any writing worth keeping could ever arrive or disappear so easily. My memory then was young and ignorant.

When it comes to writing advice, perhaps no tips are more tired than the ones that articulate some variation of “Sit your butt in the chair” or “Writing is 90 percent showing up.” These platitudes aren’t necessarily lies, but they do minimize the necessity of allowing time for your butt to get out of the chair. A few weeks ago, a friend remarked that the thing about writing is that, unlike most pursuits and in some cruel reversal of the rules of practice and experience, the more you do it the harder it gets. I laughed. Because she was right. As the years have gone by, the correlation between my creative output and the time I have spent at my desk has been inconsistent at best. Instead, what I’ve found to be more true, is that the time I’ve spent away from my desk is at least as important as the time I’ve spent with it. Specifically, the time I’ve spent away from it and walking.

The advantages of walking are well-known and long-heralded. Likewise delightful, the urban perambulatory habits of the flaneur. Less touted perhaps are the practical creative benefits of stretching one’s legs with neither exercise nor aimlessness in mind. About walking, Max Beerbohm wrote, contrarily, “My objection to it is that it stops the brain….Experience teaches me that whatever a fellow-guest may have of power to instruct or to amuse when he is sitting on a chair, or standing on a hearth-rug, quickly leaves him when he takes one out for a walk.”

With all due respect to Mr. Beerbohm, I beg—and vehemently—to differ and to say that my poetry professor was right after all: it turns out that my best thoughts have arrived to the beat of my footsteps.

The kind of walking I have in mind is not quite meditation. It is about about solitude, yes, but it is not about emptying the mind so much as it is about distracting and relaxing it. “Meditative” is the better word. The point is to get outside and occupy your body and your mind more equally and in tandem than we are otherwise acculturated to do as we sit at our desks or purposefully exercise. For some people it is city walking and for others it is country walking. Either way, it is walking and it keeps the blood from coagulating in the heart or the head.

For me, it’s a walk up a small mountain a five-minute drive from my house. I head there about four times a week, usually in the mid-to-late afternoon. That is the point by which I’ve spent a few hours working and the inevitable blooming resistance of my brain to the formation of coherent, cohesive sentences has begun. It is the moment when the worst thing I can do for myself is to keep writing, to keep trying to solve the problem. To do so often results only in my brain clamming up with renewed determination. I’ve learned (or rather, am learning) to recognize this feeling and, at its first warning signs, to save whatever work I have done, back my chair away from the computer, grab my keys, headphones, and phone, and go for a walk up the mountain down the road.

Once there, I plug into some music, open an email to myself, then settle into the old rhythm of one foot and then another that can knead the knot that has taken hold in my brain. The music is a supplementary distraction. For me, it is crucial. Soon, I am walking through the forest, listening to someone other than myself (yesterday, April 21, as I was beginning this post, it was Prince and will be Prince and only Prince for days to come), and I can palpably feel the sensation of my brain breathing out the breath it has been holding. Suddenly, there is space in my mind to make connections, identify failures of logic, concoct images that pique my curiosity. Into the clearing offered by a little literal distance from one’s writing can come rushing words you did not even know you were looking for.

The open email is to catch whatever thoughts I think might be worth keeping. The point while I’m walking is not to worry about the quality or quantity of these thoughts but to simply let them happen. The walk takes about an hour. This has, for me, proven the magic allotment—not too long to sap the day but long enough for my brain to relax its neurotic grip on my ability to string sentences together. At the end of the hour, I send myself that email regardless of what it contains. Sometimes, back at my desk, I’ll read the fragments of images or ideas that found their way to me as I walked and discard them all; sometimes I’ll keep a few and toss the others; sometimes each jotted tidbit proves worthwhile and eventually finds a place for itself.

That advice I received as an undergraduate has come full circle. I now teach my own students and one of them—a wonderful young writer with an exceptional ear for language—struggles with creative anxiety. She tells me she can sit for hours at her desk and write only a single sentence. What have I told her in response? I have told her not to sit there, stare, and will unwilling words to appear as if by alchemy. I have told her to get up and go for a walk. To go for a walk and to see where that takes her.

Want to work with Nell on the craft of personal essays? Learn about her course starting next month.