I’ve been an author for more than fifteen years. My first book came out with HarperCollins in February 2000 and I’ve been going ever since. (I’m British and the book came out in the UK and elsewhere, though I’m a relative newbie in the US.)

Fifteen years might not sound such a long time, but I’ve already had two literary agents, four publishers, seven editors, and thirteen books—even more if you include things I’ve worked on as editor or ghost. More to the point, I’ve witnessed the publishing industry evolve through at least four different eras.

The first era—I just caught its tail end—was back when price discounting was still modest. Back then, publishers still had marketing cash to spend on actual marketing. HarperCollins spent about £50,000 ($75,000) on launching my very first book, with posters up at rail stations and airports, on the London Underground and elsewhere. I was lucky: those times were already ending.

Before long, retailers started to become more assertive. They slashed prices to lure consumers and sold space in their retail promotions to replace that lost income. The cash that had once been used to attract consumers was now going straight to bookshops to compensate them for the pain of all that discounting. No more posters, no more direct appeals to the consumer.

That was the second era, but it was still pre-Amazon, pre-ebook. And as that third era dawned—the Dawn of Bezos—it turned out that the actual digitization issue was easy. (E-reader technology? Get Amazon and Apple to invent something. Distribution? Leave it to Amazon and iTunes.) The thing that truly gave publishers sleepless nights was the risk that their traditional retail buyers would go extinct.

In both the US and the UK, Borders collapsed. Barnes & Noble and Waterstones, the book retail leaders in either country, were either loss-making or only marginally in profit, a situation which still persists.

Publishers were finding it increasingly hard to sell in print and to sell right across their front lists—but it soon turned out that they didn’t have to, either, or not the way they used to. The huge margins they made on ebooks more than made up for the loss of print revenues. The equally huge margins they made on their backlist ebook titles made up for the struggles of the frontliners.

In a weird, paradoxical way, Amazon provided both the threat (the rise of the ebook) and the solution (those giant margins).

The net result? It turns out that now, at the end of that third era, publishers are making more money than they ever have done before. All those tedious stories about Amazon wanting to swat publishers from existence somehow ignore the fact that Amazon is only marginally profitable, while the publishers are making a fortune. (And, yes, literary agents know how much money publishers are making, but they still haven’t managed to reverse the long decline in author incomes. No sign of that changing.)

But what about the author in all this? What does it mean for you? What has it meant for me?

Well, I don’t know. Anyone who claims to have answers is a fraud: the wheel is still in spin, the ball has yet to settle. But I do have a story that contains the seeds of an answer.

I said I’ve been through a number of different books, different editors. Well, I should really have added that I’ve been through a number of careers too. I started out writing financial thrillers. Those things morphed into historical fiction. Then I jumped over to nonfiction, both specialist and non-specialist. But I could never stay with nonfiction forever. I just liked telling stories too much. So I started writing a series of mystery novels, featuring a young Welsh detective, Fiona Griffiths.

Those books did really nicely, and still are. They sold in the UK, in the US, and to other publishers in Germany, France, Spain, Italy, and elsewhere. A production company optioned the rights to the first book and that book has already successfully been televised.

Which is nice. My career has had some ups and downs (more about that here if you’re interested), and it’s wonderful to be writing series fiction that’s performing strongly. It’s like having all the nice bits of being a writer (the writing) without all the worst bits (the massive financial insecurity).

Only there’s a twist in this tale, a twist that caught me totally by surprise.

In the US, my books were bought by Delacorte/Bantam Dell, part of Random House. I enjoyed a superb editor and the firm’s quite excellent production standards. I got some incredible reviews—that first book, Talking to the Dead, had starred reviews in Publishers Weekly and Kirkus and was a crime book of the year for the Boston Globe and the Seattle Times. What’s more, my ebook sales were strong enough that I’d earned out my author advance before the book had even come out in paperback. That’s good going.

As you can imagine, I was pretty pleased. An author’s turbulent life looked, for once, to be pretty calm. With hindsight, I was like the pretty teenager in the weird, creaky house who decided, “Nope, there’s nothing to worry about here.” The quiet bit before the horror starts.

Because the two books I did with Random sold well as ebooks, they pretty much failed in print. The $27 hardback isn’t an obviously desirable product for today’s crime/mystery reader—certainly not when debuts are concerned—and the book basically flunked. Because retailers couldn’t shift the hardback, they didn’t want to be burned twice, so they ordered the paperback only in very limited numbers. That too sold horribly.

What we had was a paradox—emblematic of that third era in publishing—where a book could have (a) great reviews, (b) a good author-publisher relationship, (c) excellent production quality, (d) strong ebook sales, yet (e) be a print failure. What were we to do?

To me, it was obvious that we needed to establish the series in stages. We’d start with ebooks, priced so as to attract the risk-averse buyer. Then, once we’d built a base, we’d start to issue affordably priced paperbacks. Then, once all that was strong enough, we’d offer the premium priced hardback too. Simple.

Only not. For one thing, Random House wasn’t set up to work like that. There were e-only imprints (Alibi) and there were hardback imprints (Delacorte). There wasn’t, and isn’t, an imprint able simply to publish a title in whatever was most natural to that author and that book.

And then too, if I was going to be published e-only by Random House, I would receive just 25% of net ebook receipts. That’s about 17% of the ebook’s cover price as opposed to more like 70% by simply publishing direct with Amazon. I couldn’t understand why I’d want to do that. I mean, yes, I’d have listened if they’d come to me saying, “Harry, I know giving up 75% of those net receipts sounds like a lot, but we’re going to add a whole ton of value to the publication process. We’re going to do a whole heap of things that you can’t do on your own. And here’s a stack of in-house data which shows that we can boost your sales way past the point you could achieve.” 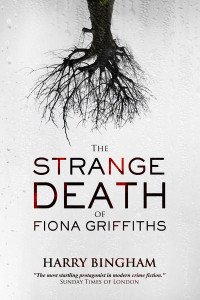 They didn’t say that. They didn’t actually make any argument at all. When I said no to 25% royalties, that was it. No further conversation.

And I was OK with that. I very happily chose to self-publish the third book in the series—The Strange Death of Fiona Griffiths—and will accept whatever outcome the market cares to deliver.

That book has just come out. It cost me about $2,000 to publish the book. That sum includes cover design, editorial work, manuscript conversion and some marketing activity—primarily an author blog tour and a paid Kirkus review. I know there’s debate in the indie community as to whether it makes sense to pay $425 for a Kirkus review, but the investment has come good for me. Kirkus described the book as “exceptional” and gave me some very quotable quotes. I don’t think you can easily quantify the impact of that review but, for me, I’m much happier marketing a book that has some potent third-party endorsements.

It’s way too soon in the publication process to evaluate whether my experiment has been successful, but my pre-orders were sufficiently good that I’d repaid my upfront investment on the day of publication itself. The advance I’d got from Random House was $30,000 per book, so I’ve a way to go before equalling that, but I don’t rule out succeeding. It’s just too soon to say.

And this, I think, will be the theme of this fourth era that’s now just possibly emerging. It’s a world where authors with plenty of Big 5 sales experience choose to say, “You know what, I’m not playing this game any more.” Where authors make a positive choice to walk away from the terms offered by good, regular publishers.

The much-published Claire Cook has already described on this blog her own journey away from the Big 5. Her story is different from mine, but it’s also the same. There are others too. On my own website, William Kowalski—a critically acclaimed bestselling author—talks about why he made a similar journey. A spatter of refuseniks.

The traffic isn’t only one way. Hugh Howey is the epitome of self-publishing success, but he was (rightly) happy to accept a huge print-only deal from Simon & Schuster. He’s also 100% conventionally published in the UK. There are plenty of other examples of self-pub authors who have decided to take all or part of their business over to the traditional model.

And that’s great. The fourth era isn’t one where Indie Publishers Destroy The Evil Big 5 Oligopoly, or vice versa. This new era of publishing is one where authors have a meaningful choice. What that choice is will depend on the author, the territory, the genre, and multiple other issues which will vary across every different situation.

For what it’s worth, I suspect that publishers will adapt fine: they’ve adapted to everything else. Agents too: they’re going to have to understand that their authors have more options than they did before, and that their agencies can’t necessarily take a cut of everything that moves. (Again, most agents will navigate this shift just fine: my own literary agent has shown immaculate integrity and professionalism.)

But the fact that some major players will be able to adapt doesn’t mean that nothing’s changed. On the contrary, from my own point of view, the ability to say, “Thank you, but no” to a massive publisher is an utterly revolutionary and liberating shift. And the more that authors move from trad-pub to self-pub and back again, the more publishers will be aware that things have changed. If they treat authors poorly—and they do far, far too often—they’ll need to bear in mind that the author in question now has a choice about where to take the next book, far more than was ever previously the case.

Of all the ages of publishing that I’ve lived through, this is the one I’m happiest to be part of. The one that feels most exciting, most aglow with promise.

Long live the revolution! And may you always find readers!

Note from Jane: Harry’s book The Strange Death of Fiona Griffiths is available on Amazon and elsewhere. If you want to find more about Harry: visit his author site | Jericho Writers

Harry Bingham writes crime novels and loves it. When he’s not doing that, he runs the Writers’ Workshop, a British literary consultancy. He lives in Oxfordshire, England, but spends a lot of his childhood in Wales, where his crime novels are set. Things he loves apart from writing: wild swimming, rock-climbing, walking, & dogs. He’s married, has two kids, and he loves his life.