Today’s guest post is an excerpt from Writing the Intimate Character by Jordan Rosenfeld (@JordanRosenfeld), published by Writer’s Digest Books.

Some stories require greater scope, more voices, or a different context than can be delivered through the eyes of one protagonist. When you find this to be the case, consider using multiple viewpoints. However, you must think about several factors before launching into this greater undertaking.

In a book with co-protagonists, each character should get approximately equal story weight. In other words, no one character is more important than the other, though one character’s story may seem to drive the action more than the others. Usually these multiples are written in an intimate POV, and each co-protagonist gets his or her own POV chapter or scene, in which we are privy only to that character’s thoughts and feelings. When your co-protagonists appear in a scene together, you still must choose which character’s POV to show it from. This has the potential to get confusing, so remember to imagine that each character possesses a movie camera. The POV comes from the person whose camera (mind) we’re looking through.

Using co-protagonists is different from omniscience, in which the POV can move between the heads of multiple characters in the same scene. Often in omniscient, the story has one protagonist, but the narrator still dips in and out of other characters’ thoughts, adding flavor, clues, and color. But ultimately we are still following only the transformational arc of one character.

Using multiple viewpoints can benefit your story in several ways. Keep in mind that when showing the vantage points of co-protagonists in one of the intimate POVs, you must start a new scene or chapter each time you switch.

5 reasons to use multiple viewpoints in your novel

Your story must be told from multiple perspectives. No matter how compelling one person’s journey, some stories are more deeply realized when several people tell the same story, adding different facets to the larger picture. Novels that have done this include All the Light We Cannot See by Anthony Doerr, The Girl on the Train by Paula Hawkins, The Help by Kathryn Stockett, and The Hours by Michael Cunningham. This is especially true when each member in your cast of characters provides a unique piece to a larger puzzle: They might not understand each other’s lives, or they might clash against one another as a result of plot events.

Each character offers a unique plot thread or strand to the story. Multiple POVs only work when each POV character has a truly different story element to offer. They contribute new information, opinions, history, and clues that walk us deeper into the story’s heart.

Your story spans a wide swath of time and history. Historical novels or stories that cover large time periods often feel limited when told in only one character’s POV. Since one character may also possess only a portion of the knowledge you need to convey, multiple characters can offer a feeling of depth and richness. But again, don’t bring in a new co-protagonist unless you are sure she is integral to the plot and carries her own arc.

Your book requires a quick and compelling pace. Multiple-character POVs have the power to make readers turn pages at a fast clip. As you end one character’s compelling scene at an unresolved point, you also create a yearning in readers to know what happens next. Repeat this technique with two or three characters and you create positive page-turning tension.

Before you get too excited about creating a cast of co-characters, it’s wise to consider some of the potential pitfalls inherent to multiple POVs.

Readers don’t need the POV of the antagonist unless you’re redeeming that antagonist via his own narrative arc. I’ve read a lot of client manuscripts that try to “explain” the antagonist’s actions by offering several chapters from the antagonist’s POV. Unless you plan to redeem your antagonist so that he truly becomes a good, or better, person by story’s end, this is not necessary.

Don’t rehash the same scenes from different characters’ POVs. Don’t fall into the bad habit of writing the same scene from several characters’ viewpoints. Unless each rendition offers new and potent plot information, you run the risk of boring readers and slowing the pace of the narrative.

Don’t use new characters to offer narrative info dumps or explanatory plot information your protagonist doesn’t provide. A viewpoint character has to exist for his own story purpose, not just to offer up key plot explanations to carry your protagonist to the next stage of the journey.

Don’t add characters to create new subplots. Some writers feel that the best way to create a compelling plot is to include lots of subplots linked to more characters. More often than not, this leads to complications. The best plots arise from one character’s problem, past wound, or current challenge. Subplots must also rise organically, like spokes radiating from a central hub rather than a tangled web of overlapping and confusing stories.

The character arc of each co-protagonist should be distinct. New characters are exciting and fun to write, and it’s easy to dream up a team. But it’s a lot harder to develop a unique story arc for each character. If you can’t quickly think of how each character not only will play an integral part in your plot but also will experience a story-worthy transformation, you’re better off sticking with one protagonist.

To figure out how many co-protagonists to include in your story, analyze novels in your genre with multiple viewpoints. You’ll find that three is the average number of co-protagonists, but it’s by no means the rule; many novels have only two POVs. And while focusing on the struggles of more than three POV characters can cause readers to feel torn or confused, that’s not to say it can’t be done: Marlon James’s Man Booker award–winning novel, A Brief History of Seven Killings, has no fewer than thirteen protagonists spanning seven hundred pages. He pulls this off by putting the viewpoint character’s name at the top of each chapter so readers have no doubt whose POV they’re in, and he imbues each character with a distinct voice. However, I prefer books in which readers can tell who the POV character is by his distinct voice and personality alone. 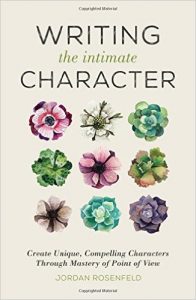 To determine how often to switch to a different viewpoint character, many writers use a formula wherein each co-protagonist gets a POV chapter or scene in a set rotating order: Protagonist A, Protagonist B, Protagonist C, all the way through the novel. Others might structure their scenes so one character appears more often than the others: A, B, A, C, A, B, A, C, or even A, A, B, C, A, A, B, C.

This is where scene trackers and plot outlines come in handy. When you’re juggling multiple protagonists, you will need more structural guidance to keep track of the arc and plot outcome for each one.

If you enjoyed this post, be sure to take a look at Writing the Intimate Character by Jordan Rosenfeld.