I started writing seriously after being diagnosed with early onset Parkinson’s. Now was the time to do it, or quit talking about it. I began with children’s books, starting with the story I had been promising myself to write, Pepperoni Moon, which was about the power of love, and two stray cats.

I thought it would be easy writing a picture book. I was very proud of myself when I finished this cute and clever 3,000-word story until I discovered that the maximum word count had to be no more than 1,500 words but 500 would be better. I never imagined it would be so difficult to tell a good story with so few words.

I attended workshops and slowly learned more about the art of writing and about the business of publishing. It kept me occupied and focused on something other than my illness. I kept going, and each time I did, something new came out and I would share that with my husband and friends. And then came Emily and Bess—where it really began.

Although my life was happy and good, I couldn’t deny my disease all together. I was trying to get adjusted to medicines, walking was not as easy, but still, I was able to do it on my own without a walker or wheelchair. Then there was typing. My hands would lock up and get stuck on keys and I would regularly type six S’s and seven A’s. But I remained determined.

Mind you that before all this, I taught yoga. However, I believe the universe has had something much larger in store for me, and now I believe it more than ever—such as learning how to face adversity with love, and understanding the power and role creativity can play in keeping our soul strong. We think it’s all about the body, but it’s not. A strong, creative elastic soul is equally important when it comes down to survival.

I began singing to my husband every night and writing every day. I became obsessed. I couldn’t allow myself to get dragged down. Simple was not in my vocabulary and depression was something I couldn’t afford. I told my doctor her job was to worry and mine was to have a good life. I forged my way with humor, dignity, heart, and spirit, and with a lot of patience and help from my loved ones and friends. But I always kept in mind that people are more inclined to visit someone with a happy spirit then someone who is depressed, so I fought to stay on the side of productive, creative and happy.

I co-found a workshop called Sing For Your Health for people with Parkinson’s Disease, and I continued with Emily and Bess, the story of two elephants in captivity who happened to be members of the Circus of the Queens.

Music and writing added joy not only to my life, but my husband’s, too. I started giving home concerts in our apartment with my guitar friend, Hendrik. They were a big success. I was invited to participate on a panel with my neurologist at a Michael J. Fox / Davis Phinney Foundation event about people living well with PD. And I became a Parkinson’s karaoke queen, dragging my husband to karaoke clubs as part of my physical therapy routine.

I was very proud of how I was dealing with this disease. Emily and Bess melded into the Circus of the Queens after my husband had asked me who the queens were and I couldn’t come up with an answer. It also slowly became a full-blown adult novel and it grew and grew as I wrote and rewrote until I fell in love with my own pages. Then in just a second my world changed. Like a tsunami crashing its way to shore with all the force and destruction it could muster, an undiagnosed aneurism exploded in a major abdominal artery as my novel was nearing completion.

“Your wife is very sick, very sick,” they told my husband. Truthfully they expected I had about twenty minutes of life left in me, but I surprised them. I lived! They went in and operated, again, and again, and again—four major surgeries in two weeks. I was put into a medically induced coma for close to three weeks, and was on feeding tubes for about a month. Later I was told that I had had less than a one percent chance of survival.

Yet I held onto my dreams. I hadn’t quite finished my novel and was oh so close. I hadn’t held my book in my hands, so I could not die. Plus I had yet to introduce my muse, Donatella, to the world.

While in my coma I saw my novel written out word for word. It was in a triangle surrounded by a circle and encompassed by a square. I used it to draw out every ounce of strength in me. Even though I couldn’t move, talk, and could barely see, I would recite passages in my head trying to communicate with the doctors that I was the same girl who had written this beautiful book. Though now disabled, my brain was intact, and I wanted to live. I was worth saving and I needed to hold my finished novel as a book, in my hands.

If I told you all that I’ve gone through to survive you’d never believe me. My charts even had the claims manager from my health insurance company crying. I had to console her.

I was in hospitals and rehab centers for five and a half months. I almost forgot what our apartment looked liked and couldn’t imagine an evening of normalcy with my husband. Two years later I am still teaching myself to walk, but I am out in the world once again dragging my husband to karaoke clubs where I sing Etta James and Amy Winehouse, Patsy Cline, Otis Redding and others. I’m back at Sing For Your Health and taking water aerobics. I finished my novel one finger at a time. And after numerous rejections and almost as many revisions, I got signed by Rare Bird Books. I’m now a published debut author, a title I love and wear with pride—and writing a sequel called Circus of the Queens: The Shadow of Lillya. My muse, Donatella, is quite happy that her story is available to the world. 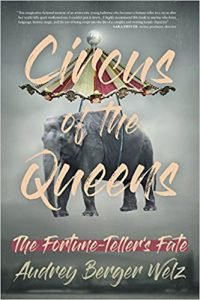 When I was in the emergency room of the hospital in horrible pain, a nurse was filling out a form and asked my husband what I did for a living. To simplify things he told her I was unemployed. But even in that state I would not allow that to be the answer. My husband says that I bolted up from the gurney and told the nurse, “No I am not. I am an author. I wrote a book.”

If I had died those would have been my last words. But I survived and my husband says that through all of this, my writing and Circus of the Queens saved us and sustained us by adding joy and happiness to our home daily, making us laugh, making us cry, but leaving us always with a smile, because that’s what the power of imagination can do.

Audrey Berger Welz is the author of Circus of the Queens: The Fortune-Teller’s Fate, published by Rare Bird Books (a Vireo Book). It is her first novel.