Today’s guest post is by Ricardo Fayet (@ricardofayet) of Reedsy.

Authors who want to get their books in front of a large number of readers often pay good money to do so; that’s what book promotion sites like BookBub, Freebooksy, Bargainbooksy, or BookGorilla are all about.

Free exposure can come through social media, but online reader communities such as Goodreads are designed for users to discuss books they read—not for authors to promote books they write. If you just post a message about your book in these communities, it will be perceived as spam and removed (and rightly so!).

But what about online spaces where readers gather … but not because they’re readers? Reddit is an online community where you can get your book in front of hundreds of thousands of readers for free. That is, if you have the right strategy.

So what’s the concept? First, all Reddit discussions are segmented into subject-specific threads called “subreddits.” Within each subreddit, users submit posts. These can be link posts (link to an external website or blog post), text posts or image posts. Certain subreddits only allow certain types of posts; for example, the infographics subreddit, r/infographics, only allows image posts.

Users upvote, downvote, and/or comment on posts. The more upvotes a post has, the more visible it will become in the “hot”, “rising” and “top” categories of the subreddit. If a post gets a crazy amount of upvotes, it can even show up on Reddit’s main homepage, which aggregates the top posts from across all subreddits.

Now, before you venture into the Reddit world, there is one important thing you need to be warned about: it is quite a special crowd. If terms of demographics, Reddit’s users are vastly skewed toward a younger male audience, based on a Pew Research Center study of 2013. This research doesn’t take under-18 internet users into account, who in all likelihood make up a substantial percentage of Reddit users. 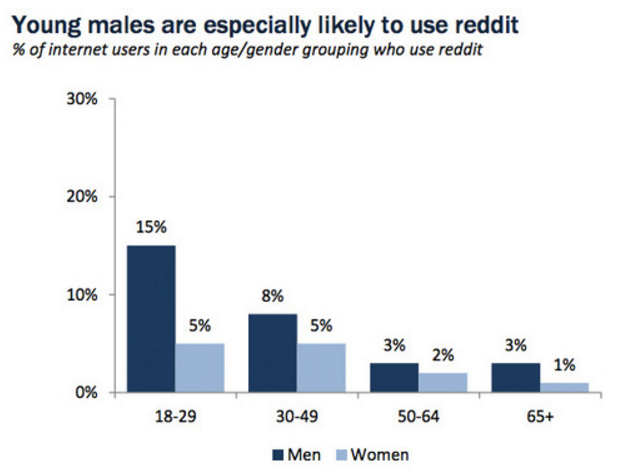 Reddit is what you’d call a more “aggressive” social network, where opinions are expressed in a very direct way, and where harsh (but fair) comments are valued above everything else—except humor (well, “Reddit humor”). So before you start posting in subreddits—and especially before you start mentioning your books!—try to immerse yourself in a few conversations and spend a bit of time familiarizing yourself with the atmosphere of this peculiar social network. It might not be the right place for you.

How to fit Reddit in your book marketing plan

If you tread carefully, Reddit can bring a massive boost to your book marketing efforts and overall book exposure. Let’s take a look at a couple examples.

Eliot Peper, Cumulus: Eliot Peper is a novelist based in Oakland, CA, who released his novel Cumulus—a dark, gritty cyberpunk thriller set in a near-future Bay Area—in May 2016. On its first day out, Cumulus simultaneously made the front page of Reddit and hit #1 on Amazon in the cyberpunk category. How did that happen? Eliot shared some insights with us.

First, he did not post it on Reddit himself. Someone spotted the review of Cumulus at Ars Technica and posted it to the /r/books subreddit; from there it took off, getting over 2,000 upvotes and 300+ comments. You’ll notice that the first comment on the post has even more upvotes than the post itself (and represents the “Reddit humor” I mentioned earlier).

Though Peper didn’t make the original post, he capitalized on its success by reposting Cumulus to other subreddits, like /r/cyberpunk, where he received a fair amount of upvotes as well.

Danny Flood, Hack Sleep: Danny Flood is a five-time Amazon bestselling author and self-proclaimed life and business hacker. He wrote a good post on how he managed to place five #1 best-selling books on Amazon in five weeks. Quite interestingly, his strategy relies heavily on newsletters, Facebook ads, and … Reddit1

He generally runs a free promotion on his books when launching them, which allows him to post his book on several “free books” subreddits, such as /r/freeEBOOKS, /r/KindleFreebies, and /r/shamelessplug.

Then, he looks for a subreddit relevant to his book’s theme (for example /r/GetOutOfBed for his book Hack Sleep), and cross-posts it there as well—but only after checking the rules of the subreddit and the type of posts that tend to do well on it. (Cross-posting means posting a link on a subreddit that points to a Reddit post on another subreddit.) For example, the screenshot below is of a post on r/GetOutOfBed that links to the original Hack Sleep post on r/KindleFreebies.

If you want to try and get some Reddit-love on your next book, consider a strategic approach using the following steps:

Step 2: Stick to the rules. Subscribe to the subreddits you want to reach and take a look at their rules and top posts. Identify what type of post works best in each subreddit (link, text, image, cross-post, etc.).

Step 3: Interact with other users in your target subreddits. Spend a few weeks interacting with users on each subreddit. Post relevant (non-promotional) content, comment, upvote, etc. Basically, become part of the community before you introduce them to your book. In some ways, this is the most critical step in using Reddit for book promotion, as the site’s users are extremely sensitive to perceived “outsiders.”

Step 4: Identify optimal posting times. Every subreddit is different. Some are very active in the mornings, others in the evenings. Try to post during the subreddit’s highest-volume use. You can use the RedditLater website (free) to identify the optimal posting time for each subreddit.

Step 5: Publish an honest and/or funny post when your book is out. You can either post it yourself, or have a friend (who is familiar with Reddit) do it for you. I recommend the first option, especially if you’ve followed my advice in Step 3. Make sure your (or your friend’s) tone matches that of the subreddit.

Step 6: Answer comments as they come in. Not all comments will be nice, so keep cool and answer with humor where you can. If your post gets downvoted a lot but receives a lot of comments, it will still get some exposure in the “controversial” category.

Step 7: Cross-post to other Reddit channels. Instead of posting the link to Amazon in every subreddit, post it once and then cross-post on the other subreddits. This will be perceived as slightly less spammy (and it shows you know how Reddit works).

Popular subreddits you should look at

There are close to 1 million subreddits on Reddit. Most of them only have a handful of subscribers, but that’s still a lot of ground to cover if you want to find the ones most relevant to your book. If you’re a fiction author, we’ve compiled a handy spreadsheet with all the popular subreddits (1,000+ subscribers) in every main fiction genre. You can access it here. If you’re a nonfiction author, try running a Reddit and/or Google search for your book’s theme, or ask us for suggestions in the comments below! 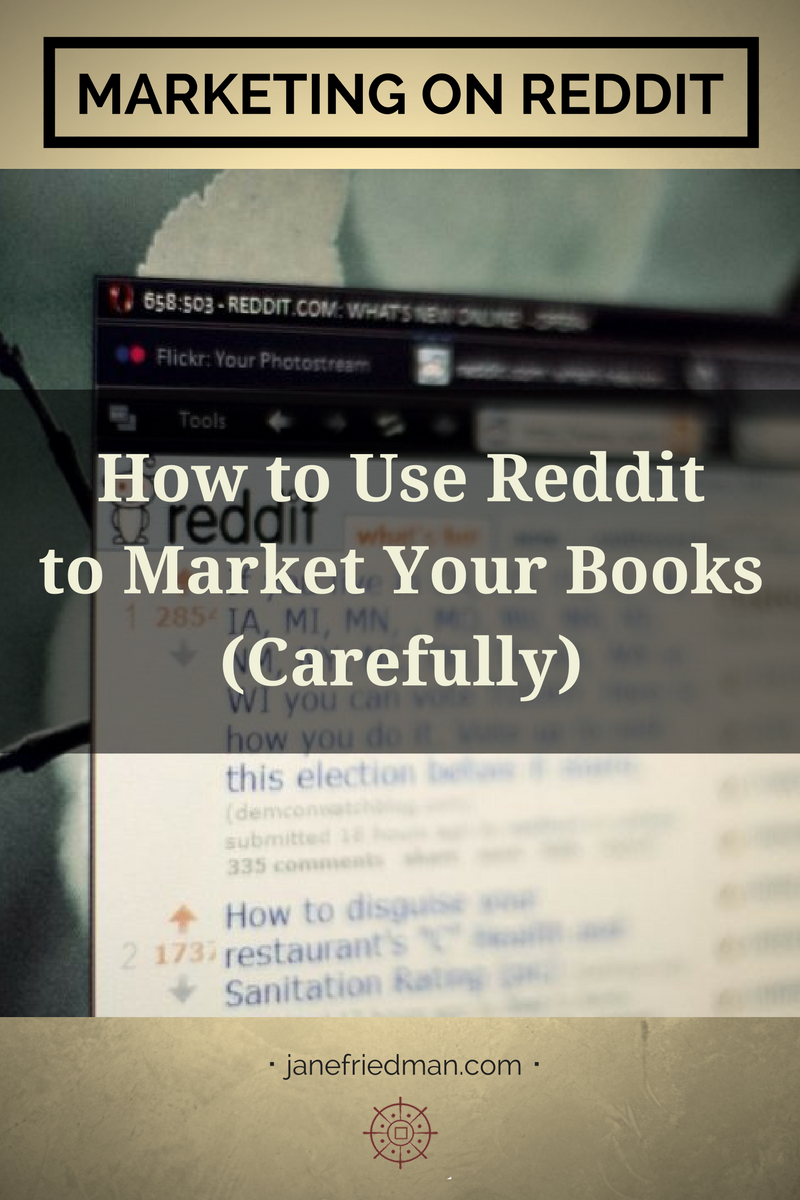 Ricardo Fayet is one of the founders of Reedsy, an online marketplace of top editorial, design and marketing talent. He’s the author of several Reedsy Learning courses, including the course that spurred this blog post: How to Set Up and Grow Your Author Mailing List. Reedsy Learning courses are all free and delivered in your inbox every morning, so give them a try!