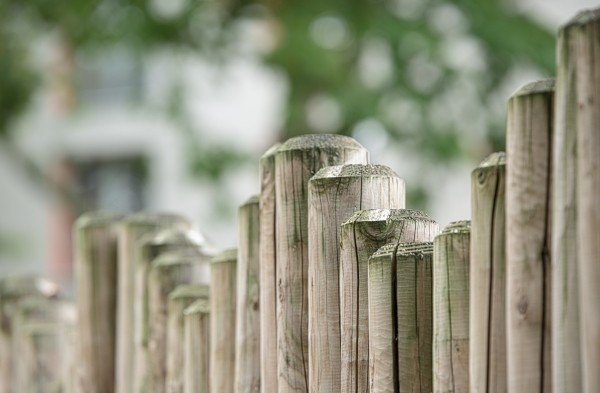 The Plot Planner is a visual plotting tool that many writers, myself included, find helpful in plotting fiction, memoirs, creative nonfiction, and screenplays. It serves as a great teaching tool for planning, pacing, keeping track of, testing, fixing, and refining a plot. Consider it a bridge between the invisible world of creativity and the visible world of the five senses.

This post elaborates on the benefits of using the Plot Planner, the formats it appears in, and how it relates to both plot and character development.

The Benefits of Using a Plot Planner

A Plot Planner helps you visualize your story. Use it to do the following:

Most important, the Plot Planner enables you to keep the larger picture of your story in full view as you concentrate on writing individual scenes. It maintains paramount focus on crafting a story that conveys your core message to your reader and audience in a compelling and meaningful way.

Formats for the Plot Planner

The Plot Planner can be displayed in two different formats. In both formats, notice how the line moves steadily higher, building your story slowly and methodically as tension increases. Each scene delivers more tension and conflict than the preceding scene, with intensity building to your story’s climax. 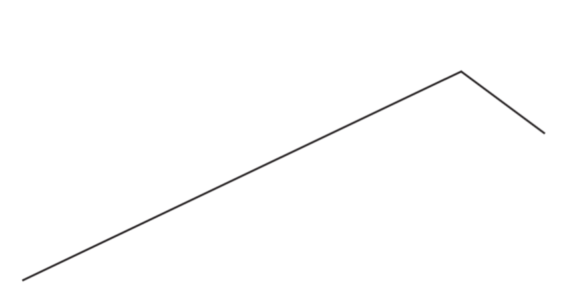 When I started teaching plot intensives, I described the design of the Plot Planner as waves cresting. Typically the structure of a short story builds to one giant wave in which a crisis serves as the story’s climax. (This mirrors Format 1.) Novels, memoirs, creative nonfiction, and screenplays have two peak moments: the dark night or crisis and the ultimate climactic moment.

In the second case, the crisis and the climax are written as separate scenes. (This is reflected in Format 2.) Again, there are no rules; use the format of the Plot Planner that best supports your story.

The flow of a story emanates from dramatic action, character emotional development, and thematic significance. The Chinese call this flow in humans qi (pronounced “chi”). The qi directs and coordinates the flow of energies and is the mainstay of one’s life force. Qi cannot be touched or seen, but it is inherently present in all things.

A story is about things happening to people and the world around them, and is thus made up of energy. The energy of a story doesn’t remain flat, just as the Plot Planner line isn’t flat. A story grows in intensity, which is reflected in the line moving steadily higher as the stakes and the energy of the story also rise.

Characters move and make things happen. Tension builds. Each scene shows more conflict than the one that came before. Each defeat the character suffers is more intense and more costly, and creates incrementally higher degrees of difficulty to overcome, as reflected in the direction of the Plot Planner line.

Plotting Above and Below the Lines

In every great story, a protagonist pushes toward something (her goal), while forces both internal and external attempt to thwart her progress. This struggle between the protagonist and the antagonists sends the energy of your story soaring. The more powerful and formidable the antagonists, the greater the intensity, drama, and excitement in the scene.

Antagonists fall within one of six standard categories:

The main struggle of the story is between the protagonist, who wants something enough to take action against all odds, and the antagonist(s) or forces within and without the protagonist who work against her.

By placing ideas above or below the Plot Planner line, you create a visual map for analyzing critical story information, presentation flow, and weaknesses in your story’s overall sequence. You are also able to track how the energy of your story rises and falls.

Like the surface of the sea with its white caps and waves and swells, the external, gripping territory of the dramatic action, when your protagonist is out of control, fearful, lost, confused, or under the power of an antagonist, belongs above the line. All scenes that show complications, conflicts, tension, dilemmas, and suspense where the protagonist is forced away from her goals belong above the line.

In summary, scenes that show action where the power is somewhere other than with the protagonist go above the Plot Planner line. They can include the following:

Scenes where the protagonist is proactive rather than reactive, or is deciding the best course of action to accomplish her goals and then taking it, belong below the Plot Planner line. These scenes can include the following:

Scenes in which the protagonist is doing one of the following also belong below the Plot Planner line:

The Structure of Stories

Understanding the structure of a novel is paramount to using the Plot Planner to best effect. A story can usually be divided into three parts: the beginning, the middle, and the end. Remember, however, that rules are made to be broken.

Part One: The Beginning 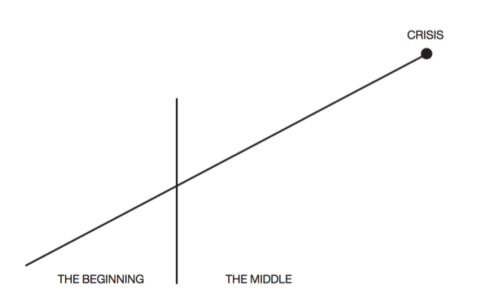 The middle is the longest portion of the story—approximately 50 percent of the total—and contains the most scenes. This is where many writers come up short. Daunted by the long expanse that awaits them, they stop in despair. Part Two generally ends soon after the character reaches the false summit on her mountain journey, the crisis.

The Crisis is where the energy of the story reaches its highest point so far, and it is where the tension and conflict peak. In facing the greatest fear, pain, or disappointment, or the most unexpected shock, betrayal, or failure, the protagonist is forced to see herself clearly for the rst time. In some cultures, this time is referred to as the dark night of the soul. It is a major turning point. Will the protagonist ignore the wake-up call? Or will she grow and change as a result of the crisis? As I mentioned earlier in this chapter, if you are writing a short story, the crisis may be the highest point of the piece. In short stories, generally speaking, there need be only one high point.

In a novel, once the protagonist has been hit with the crisis, the story is not over—the crisis is actually a false summit. Once she arrives as the crisis, however, the true summit becomes visible. The dip in Format 2 of the Plot Planner is where the energy of the story drops, giving the reader time to breathe after the excitement of the crisis and before the protagonist undertakes the journey to the climax.

The end of the story is comprised of the last 25 percent of the entire narrative. The end is made up of three parts: the buildup to the climax, the climax itself, and the resolution. 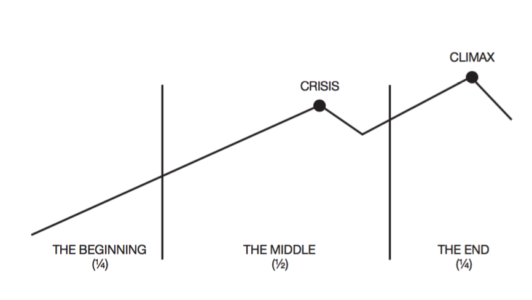 The Buildup to the Climax: The protagonist enters the end of the story wiser, having suffered the setback at the crisis. The goal she sets for herself in the end determines the dramatic action in the scenes building up to the climax. That same goal also determines the antagonists she will meet as she moves forward. She is stronger and wiser now. So, too, are the antagonists determined to stand in her way.

The Climax: The climax is similar to the crisis in that it is another major turning point of high drama. But if the protagonist is given a chance to view herself clearly during the crisis, the climax is her opportunity to show if and how she has indeed grown, changed, learned, and transformed. After the crisis, the protagonist might say with full conviction that she will never be the same. But it is one thing to say it and quite another to actually do it. At our core, all of us have a natural tendency to resist change, preferring to hold tight to the comfort of the familiar. To stretch and grow and change involves the unknown. Rather than risk the possibility of failure, most of us would rather not even try. The climax involves some sort of action that forces the protagonist to show the reader who she is at her core now that she has experienced all she has throughout the story.

Old habits are tough to break. A character who has been put in a high-conflict, high-tension situation will first fall back into old ways. The suspense increases. The reader knows the protagonist has sworn she has changed. Will she act accordingly?

The Resolution: The resolution is where you tie up loose ends. Not all of the subplots need to be resolved by the end of the story, but the important ones do. Tie up only enough so that you provide thematic meaning to your overall project.

If you enjoyed this post, then be sure to take a look at Writing BlockBuster Plots: A Step-by-Step Guide to Mastering Plot, Structure, and Scene by Martha Alderson.