“It is seldom advisable to tell all.”

—The Elements of Style by Strunk & White

One of the most useful and powerful devices for the fiction writer is understatement. You tell the reader less so that the reader knows more. Instead of having everything spelt out, the reader is given, in a very careful way, just enough information for the imagination to go to work. From understatement the reader can derive great pleasure and satisfaction.

In popular fiction, and in romantic fiction, for instance, understatement is rarely used. This kind of fiction is often an exercise in overstatement. I will give you an example of overstatement from a romantic novel, and then two examples of understatement. All three pieces of writing are meant to give the reader an image of a man and a woman embracing. The images in the second and third “literary” examples are achieved only in the mind of the reader, whereas in the first one the romantic writer explains things graphically for the reader. Many readers love this kind of writing. How you do things depends on what effect you are aiming for. I generally prefer understatement myself.

“He advanced towards her with a purposeful expression, and she backed away, laughing, trying without success to ward him off with her hands. He caught her to him and kissed her, bending her dramatically over his arm like a twenties film heroine, and exploring her lips unmercifully until she could do nothing but wind her arms around his neck and kiss him back.”

“And by the harbour, in the midst of the wagons and barrels, at every street corner, the citizens opened their eyes wide in amazement at the spectacle, so extraordinary in a provincial town, of a carriage with drawn blinds, continually reappearing, sealed tighter than a tomb and being buffeted about like a ship at sea. Once, in the middle of the day, when they were right out in the country and the sun was beating down at its fiercest on the old silver-plated carriage-lamps, an ungloved hand stole out beneath the little yellow canvas blinds and tossed away some scraps of paper, which were carried off on the wind and landed like white butterflies in a field of red clover in full bloom. At about six o’clock the cab drew up in a side-street in the Beauvoisine quarter, and a woman got out; she walked away with her veil lowered, and without a backward glance.”

“In town, the lights were going on, and we were sitting on the bank on the other side of the river, and we were full of what they call love, that rough discovering and seeking of each other, that sharp taste of one another—you know, love.”

Of the quotation from Madame Bovary, I think it is fair to say that once you have read it, you will never forget it. The imagery is so vivid and sexual, and your imagination is given the chance to see what is going on inside the carriage without your being told about who did what to whom.

Take a scene from your work, and rewrite it in two ways, first using overstatement and then understatement. You will see how dramatically the use of understatement can affect your work. You could try showing the two versions to your potential readers to see how each version is received. Don’t be surprised if people seem to prefer the overstated version. Reading understatement requires the reader to do more work than reading overstatement. It depends on which kind of readers you are looking for, but it also depends on what kind of stories you want to write, and what kind of stories you enjoy reading most yourself. 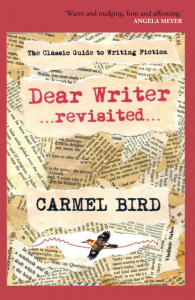 If you enjoyed this post, then I encourage you to check out Dear Writer Revisited by Carmel Bird. You can find the paperback on Amazon, and a digital edition available direct from the publisher.

Carmel Bird is an Australian novelist. She lives in Central Victoria, having grown up in Tasmania. She has written nine literary novels and six collections of short fiction. She has also written three books on the art of writing, and has edited six anthologies of essays and stories. She has taught fiction writing at the Universities of Melbourne, Deakin, Latrobe, Monash, Swinburne and RMIT. Visit her website at CarmelBird.com