Almost as soon as authors were told they should be on social media to build their platform, a counter-contingent of people started talking about how social media was a waste of time. They’d tell stories of using Twitter or Facebook or whatever the flavor of the month was and how they didn’t see any increase in sales or growth in their readership.

Usually there’s a simple reason for why social media didn’t work for them—they were doing it wrong.

I hope to save you some time and heartache by explaining seven of the biggest mistakes I see authors making on Twitter. When we use Twitter correctly, it’s still one of the best possible tools for expanding our reach.

Mistake #1: Using your bio as a sales pitch for your book.

This bio scares followers away for a couple of reasons.

Adding hashtags into our bio makes it annoying for humans to read, and it suggests we’re going to spam them to buy our book as soon as they follow us.

Telling people how many stars our book has on Amazon, or saying it’s the best thing since The Hunger Games comes across as arrogant. People don’t buy books based on a Twitter bio. They buy based on interest in the subject matter or because they know and like the author.

Your bio should be about you. What do you write? How are you unique? What type of things will you regularly be tweeting about? That type of info makes people interested in following you and getting to know you.

Authors often set up a direct message to automatically go out to everyone who follows them, asking new followers to check out their book, visit their website, or like their Facebook page. Automating a direct message in this way is a bad idea. You immediately come off as a marketing bot rather than a real person.

Another automation trap is scheduling all tweets and never spending time on Twitter. I’m not against the occasional scheduled tweet, but be careful about it.

Here’s the crux of the matter: Scheduling tweets shouldn’t be used in place of actually being on Twitter and interacting. If we’re not there, we’re asking people to do something we’re not willing to do. We want to take from them, but we don’t want to give. What if everyone scheduled tweets but never spent time on Twitter? Who would see all those scheduled tweets?

Automating tweets can also lead to awkward situations. If everyone on Twitter is talking about a recent tragedy, and our Twitter account is spitting out self-promotion, it paints an unflattering picture.

A little authentic time on Twitter is better than a constant stream of automated messages.

The point of social media is to be accessible. If we protect our tweets, we’re going to lose a lot of potential followers. Most people won’t go through the extra step of asking for permission to follow us. No one wants to take the risk of being rejected.

Mistake #4: Forgetting to have Twitter notify you when someone interacts with you.

Part of the challenge we all face with all social media is how to manage our time. So I make sure Twitter tells me when my tweets are marked as favorites, when I’m retweeted, when my tweets get a reply or I’m mentioned, when I’m followed by someone new, and when I’m sent a direct message.

By having notifications sent directly to my email inbox, I’m more able to be interactive without having to keep Twitter (or TweetDeck or Hootsuite) open all day. Plus, I miss fewer people who are trying to connect with me and the content I’m producing.

Mistake #5: Only tweeting about your book or your blog posts.

This is like being that person at the party who only wants to talk about themselves. Or who keeps trying to sell something (like the chocolate from their child’s school fundraiser). Everyone avoids those people. It’s the same on social media.

Our time on Twitter should be half conversation (building relationships), about 25% reciprocation (tweeting other people’s material), and 25% promotion of our books and blog posts. When we spend our time this way, the people we’ve built relationships with through conversation and reciprocation will retweet our tweets, amplifying our reach.

Mistake #6: Not using hashtags (or using them wrong).

Many people follow interesting hashtags by creating a column/stream for them. When we put a hashtag at the end of our tweets, that tweet is now seen by everyone who’s watching that hashtag, not just the people who follow us. Properly used, hashtags can expand our audience exponentially because we reach people who wouldn’t have known about us otherwise.

But here’s the catch. We can’t just slap a # sign in front of any old word and expect results. Not every potential hashtag is actively used and watched. We have to find ones that are. If we use abandoned hashtags, we might as well have not included a hashtag at all.

Make sure a hashtag is being used regularly either by researching it yourself (run a search through Twitter and see what comes up) or using a site like Hashtags.org.

A Twitter list can be added to a column in TweetDeck or Hootsuite so that we’re able to watch the tweets from specific accounts that we’ve curated or selected (or that someone else has gathered). Twitter lists can help us make connections with agents, editors, or book reviewers; build relationships with other writers in our genre; keep track of subject matter experts; connect with writers who live in our area; reciprocate for people who regularly retweet our tweets; and stay in touch with fans who contact us about our books or say something good about our writing. Lists are an organizational and time management life saver.

Your turn: How do you feel about Twitter? What’s your biggest struggle? 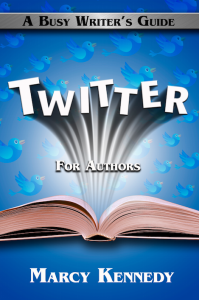 Note from Jane: If you found this post helpful, then check out Twitter for Authors: A Busy Writer’s Guide by Marcy Kennedy, available in ebook and print.

Marcy Kennedy is a suspense and speculative fiction writer who believes fantasy is more real than you think. Alongside her own writing, Marcy works as a freelance fiction editor and teaches classes on craft and social media. She’s also the author of the bestselling Busy Writer’s Guides series of books. You can find her blogging about writing and about the place where real life meets science fiction, fantasy, and myth at MarcyKennedy.com.