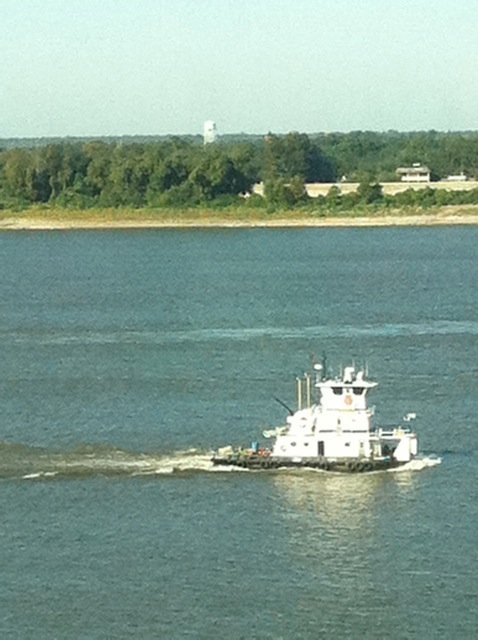 On a brisk, clear morning in Baton Rouge, I lay in a Hilton hotel bed and watched tiny tugboats push huge barges up the muddy Mississippi. Little did I know, hours later, a tugboat would arrive and tow Deirdre Gogarty and me toward publication.

Across the Atchafalaya Basin, I had traveled from my home in Acadiana to attend the 2011 Louisiana Book Festival and introduce a favorite author—Sonny Brewer—who had once rescued me in Fairhope, Alabama, when I’d sprained an ankle.

From my hotel bed, I had no inkling I’d later walk to the state capitol behind the man I’d come to introduce. Sure as hell didn’t know The Poet of Tolstoy Park author would pause to answer his cell phone on Fourth Street and notice me behind him.

Or fathom he would apologize for not being in touch due to his new job as editor-in-chief at MacAdam/Cage Publishing. And then ask, “Did you finish that book you were writing? Tell me about it again? Would you like me to read it?”

Stunned, I would manage to answer his questions about the memoir I’d spent the past five years writing with boxing champion, Deirdre Gogarty—make that four years writing and one year dogpaddling through agents’ rejections while trying not to sink.

Nor had I imagined Sonny would later ask if I’d like to meet David Poindexter, the founder of MacAdam/Cage, who would arrive from San Francisco for the book event and take us to dinner.

As I sipped Mint Medley tea in my hotel room that morning, none of those events entered my mind.

And Deirdre and I signed a publishing contract—three days before her birthday, which marked the fifth anniversary of our collaboration.

Now I’m thrilled to announce that My Call to the Ring (working title) will be published by MacAdam/Cage and in bookstores sometime in September 2012.