Today’s guest post is excerpted from A People’s Guide to Publishing: Building a Successful, Sustainable, Meaningful Book Business From the Ground Up by Joe Biel (@joebiel_) of Microcosm Publishing.

As a small and new indie publisher, it’s hard to sell even 100 copies of a book in a month, let alone every month. Bookstores will give you the runaround of why they can’t stock your book because of such-and-such ordering policy. If a book is not published with advance notice and it’s by an unknown author and an unknown publisher, that’s three strikes for most major accounts and you’re not even considered.

Many new publishers thus believe that gaining access to trade distribution would be the holy grail of their publishing quest. But like all things that we think we want, the results are not exactly what you might expect.

A trade distributor is a partner company who takes over the tasks and responsibilities of selling your books to trade accounts like bookstores and wholesalers. Because of their size and scope, trade distributors often have better leveraging power to sell books, get good placement for the books they represent, and, last but not least, get paid for books that have been sold. A trade distributor typically takes 27% of each invoice as their compensation. In this way, they are never losing money on a sale—though you may be.

Independent Publishers Group (IPG) invented the concept of a trade distributor for independent presses in 1971. The explosion of independent publishers at that time created a problem because bookstores were reluctant to set up accounts with every new publisher due to the extra work that it creates. A trade distributor brought credibility and stability to new publishers, and stores were more comfortable working with a familiar entity. IPG was bought in 1987 by Chicago Review Press, and today they employ 150 commissioned sales reps with the most boots on the ground of any distributor, including 100 gift reps, 20 commissioned education reps, and a special sales force that was up 14% in 2016.

The two greatest functions of a distributor are helping you with title development—they are experts in making it easy to understand what a book offers—and getting you into all of the stores that would love to have your books but just “can’t” purchase directly from you. A good distributor allows a bedroom publisher to operate competitively with major houses. Distributors create demand for books by contacting account buyers. Wholesalers fulfill that demand and keep stores stocked quickly after the initial push.

Once you have a book that has sold at least 5,000 copies and at least three titles that are selling consistently month over month, it’s a good time to begin shopping for a trade distributor. These stats show that you have an audience who will buy your work and is hungry for more.

Shopping for a distributor is like seeking any other kind of relationship, business or personal. You want to shop around and go with the one that seems to really get you and your books the most. You also will want to negotiate your terms, and continue to work on improving the relationship so that you can both succeed. It is vital to stress that it works best when it’s symbiotic and you are working together.

According to Mark Suchomel, Senior Vice President of Baker & Taylor Publisher Services, a publisher should approach a distributor “when they have plans for a good, ongoing publishing program. I’ve taken on publishers who have just a few titles where I saw that they could take that into a program and make it work. The distributor has to invest a bit of time and resources in order to make a publisher successful. Most distributors should have some room to make those investments. I’ve watched publishers go from a few books in a few years to a few million dollars in annual sales.”

Still, working with a trade distributor is a risk. There are many publishers competing for the same shelf space; meanwhile that space is shrinking. Of the millions of books published last year, Barnes & Noble stocked a small fraction of them—and returned many copies. A trade distributor takes a much bigger cut than retailers or wholesalers—you normally only get paid 40% of your book’s cover price or less on the books that do sell through—and there are many little costs and fees that can add up quickly. It’s easy to get in over your head, but this is the math you must stay on top of to make the relationship work.

Remember that the staff at your distributor is doing work that you either can’t or don’t want to do yourself. The work is often not nearly as glamorous as the artistic side and involves a lot of paperwork and rejection. Appreciate trade distributors for what they do and don’t approach them until you are ready and can’t move forward on your own. It’s like having a new partner that you work with to reach new places rather than a new person to do part of your work for you. Signing with a trade distributor means you are changing your distribution model, and it’s not necessarily a better one than staying small. The things that are profitable for your distributor are not necessarily in your best interest.

The perception of many new and would-be publishers is that having a trade distributor allows you to cease focusing your efforts on selling and marketing. But the best way to make this relationship successful for you is to already have a growing audience that is eager to get its hands on your books from all kinds of outlets.

That means: Distribution is not a substitute for building an audience. It’s tempting to assume that once your books are widely available via trade distribution, readers will organically discover them. But that’s not how it works.

Just World Books, a leftist publisher of global affairs distributed by IPG, has created an effective strategy for convincing stores to stock its titles. They consistently and effectively encourage their fans that support their political mission to march into independent bookstores to buy their books. This direct influence to drive customers to stores gives stores a great reason to stock their books.

Laura Stanfill of Forest Avenue Press says, “As we grew, I realized that we were spending so much time and money on marketing our titles that having them available regionally wasn’t sustainable. We needed to make our books more available nationally—and not just by print-on-demand, which has high overhead, low economy of scale, and doesn’t really convince random booksellers to order copies unless there was some sort of local connection we could bring to their attention.

“When we accepted Ellen Urbani’s novel, Landfall, set during Hurricane Katrina, I knew we would need southern bookseller buy-in, and, for that, we needed a distributor with a sales team that could reach the South. I began looking, soon realizing I didn’t print the five or so titles per year required to qualify for most trade distributors. Then I discovered a newer boutique distributor, Legato Publishers Group, a sister company to Publishers Group West (PGW). I sent some books to the president, he liked what he saw, we met for breakfast when he was on a business trip, and then his sales team watched me interact with booksellers at a local trade show a few weeks later. I’ve been with that team ever since.”

Eventually Adam Gamble, founder of Good Night Books, went to a distributor to keep up with his own success. “I just don’t see how a small press can afford to do all that a traditional trade distributor does, without it being even more expensive. Really, I don’t see much choice for publishers, unless they want to spend huge amounts of time and money dealing with issues of billing, collections, fulfillment and sales.” Good Night signed with Independent Publishers Group (IPG) and handed over their lucrative gift sales accounts to IPG’s sales team, who continued to grow these relationships and sales.

Still, distribution is not everything. Laura Stanfill learned many lessons along the way. “Distribution definitely has surprised me in terms of the inability to predict returns; that may get better as I have more titles out, and a better set of numbers to help me project, but with fiction it’s always variable. But I do know, for sure, every time we publish a book, our reps are selling it into stores across the U.S.—and a lot of small-press publishers and micro publishers don’t have that kind of reach. I have found that one of my top obligations as a publisher of a distributed press is to constantly ask myself how readers in a certain city or town will hear about our book and want to order it. With nonfiction, that’s subject-based, but with fiction, it’s a mix of getting the right reviews, creating events, making the book available in galleys to churn up interest, having eye-catching covers, picking the right sales descriptions and phrases, and building a brand that is recognizable by readers.”

To reach an audience:

You don’t need a trade distributor to do any of these things—good ones that are a good match for your work will do them, but not as well as you can and not in a way that replaces your own efforts. A trade distributor can expand your reach, but if you haven’t yet built up a way to connect with your audience, that expanded reach may not stick or be sustainable. 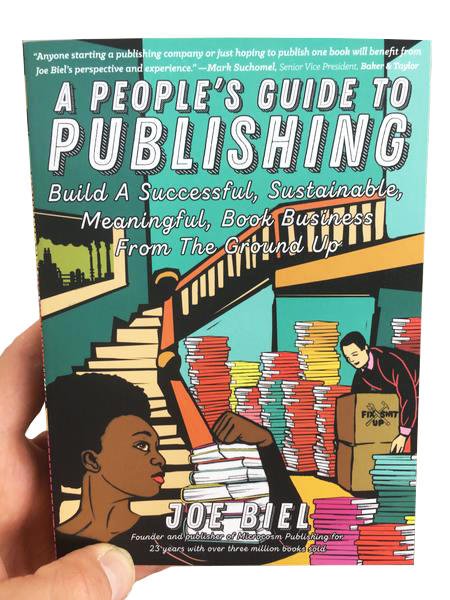 A distributor doesn’t always have congruent goals with a publisher due to their economy of scale. It’s a physical impossibility to show every book to every buyer or even to put every book in every catalog. It’s impossible to answer every email, and, in the end, corners must be cut and decisions must be made. Again, a distributor’s goal is not always your goal. Your distributor can make money through storing your books, shipping and processing returns of your books, and the various aspects of managing data and inventory that goes into publishing—without ever actually selling any books. You have to evaluate when your goals are in sync and when they are not. Someday maybe you’ll outgrow your first trade distributor and collaborate with someone else. Or maybe you’ll find that you preferred (or have a better bottom line) being smaller and getting more personal mail and doing fulfillment for some stores selectively.

No matter what, the bottom line is that your job as a publisher is first and foremost connecting readers to reading. Evaluate if and when a distributor makes sense towards those goals for you or how to best reach your most important customer, the readers.

If you found this post helpful, I recommend A People’s Guide to Publishing: Building a Successful, Sustainable, Meaningful Book Business From the Ground Up.

Joe Biel is a self-made #ActuallyAutistic publisher and filmmaker who draws origins, inspiration, and methods from punk rock. He is the founder/manager of Microcosm Publishing and co-founder of the Portland Zine Symposium. He tours with his films on the Dinner and Bikes program and has been featured in Time Magazine, Publisher’s Weekly, Utne Reader, Portland Mercury, Oregonian, Broken Pencil, Readymade, Punk Planet, Profane Existence, Spectator (Japan), G33K (Korea), and Maximum Rocknroll. Learn more at his website.