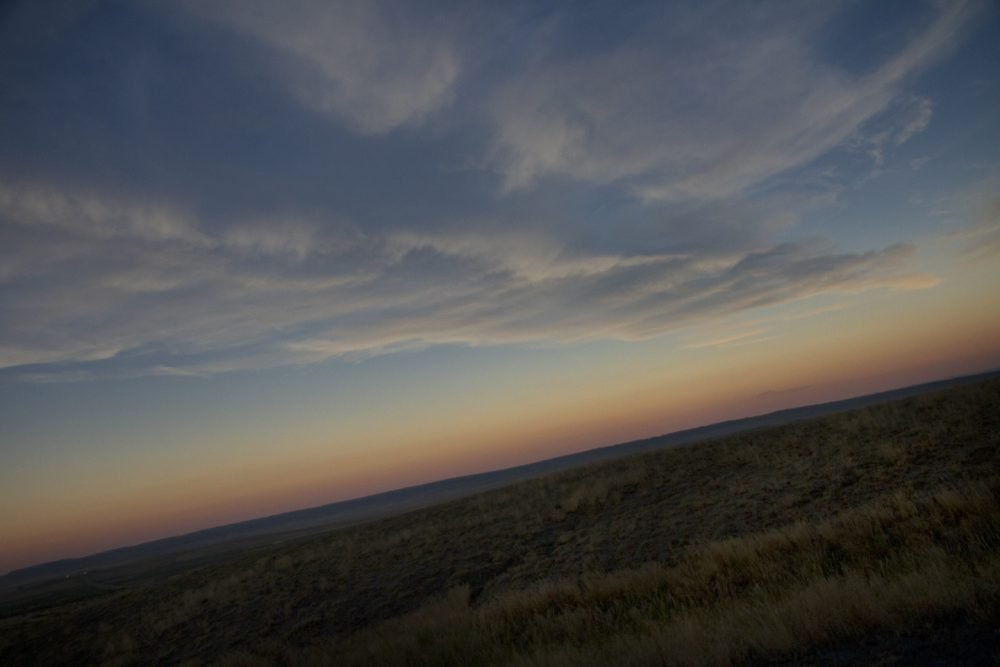 It was Annie Dillard’s essay, “Total Eclipse,” that inspired me to travel last August to the path of totality. Where we live, Prescott, Arizona, I could’ve seen a partial eclipse—70%. Having experienced both, Dillard says, “Seeing a partial eclipse bears the same relation to seeing a total eclipse as kissing a man does to marrying him, or as flying in an airplane does to falling out of one.” Whatever it would cost me to get somewhere in the path, it was worth it to me. How many chances do we have in our lifetimes to experience the truly phenomenal? I wanted to fall out of that plane.

I decided on Casper, Wyoming, and invited a close friend in Montana, Deb, to join me there. Her dog Eleanor would accompany us. Despite all the warnings about over-crowded campgrounds, and hotels booked a year in advance, Deb felt sure that we could pull off the road and camp, see the eclipse next morning, and head back to her place in Montana the same afternoon.

In order to replicate the experience Annie Dillard wrote about, we wanted to be away from buildings and concrete, to see the changing light playing on plants and hills, not on cars and humans, parking lots and church steeples. Deb had good instincts about all this—she knew the area and knew that if you just turn down some of these roads, you’d get into remote countryside rather quickly. We were barely outside of town, on Hwy. 26, when we found a dirt road, pulled in, and saw maybe half a dozen other vehicles, spaced at least fifty yards apart. We picked our place far from everyone else, and parked. It was still a couple hours till it would begin. We walked and spoke to some other visitors. We threw the ball to Ellie. We connected one guy who had an extra pair of eclipse glasses to a guy who had none. One man we talked to said he was concerned we maybe weren’t in the path, because there were so few cars here. Where were the crowds? Deb assured him this spot was in range. 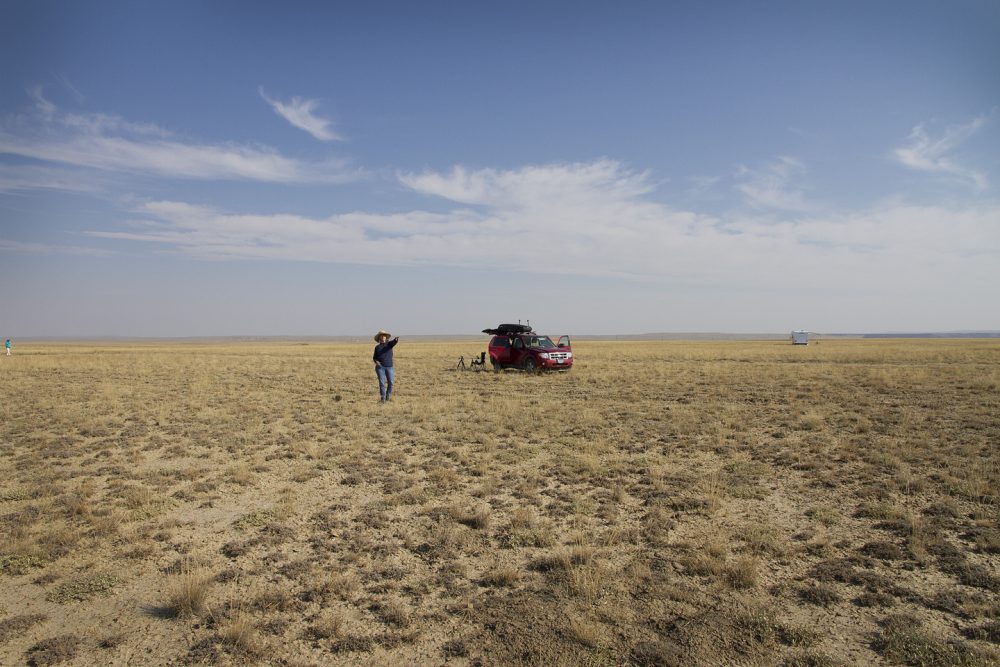 More cars rolled in over the next couple of hours, but at most, there were a dozen, and when I say they were spaced far apart, I mean that we felt comfortable squatting down to take a pee by our car. Each group of spectators had their own private viewing area. From ours, we walked to a little rise, and accompanying valley, and we unfolded one chair and rolled out one Thermarest. Deb positioned her tripod and camera. Ellie didn’t know what we were up to, but whatever it was, she was on board.

Using my flip phone as my timepiece, waiting for the moment when the first tiny chip would be scraped from the sun, a text came through, from a close friend, Andi, who’d flown from Massachusetts to Georgia. “Waiting for the eclipse!” it said. She and her husband smiled into the camera. I got the sense then of just how shared this experience would be—perhaps the most people ever in our country, engaged simultaneously in the same activity, the same motivation. In a year that had felt so very divisive, republicans and democrats never more distant from each other, this Great American Eclipse was above all that. Oblivious to Donald Trump, political discord, and human folly, the eclipse unified us.

The whole process would take some time: about 80 minutes of partial eclipse on either side of the full eclipse, which would last two minutes and twenty-seven seconds. As we waited, the last half hour before totality, I pulled a photocopy of Dillard’s essay out of my backpack, and began reading aloud to Deb. It was my third time reading it in as many weeks, but it warrants multiple reads. If you’re talking about what’s been written about a total solar eclipse, this is the essay you’re talking about. 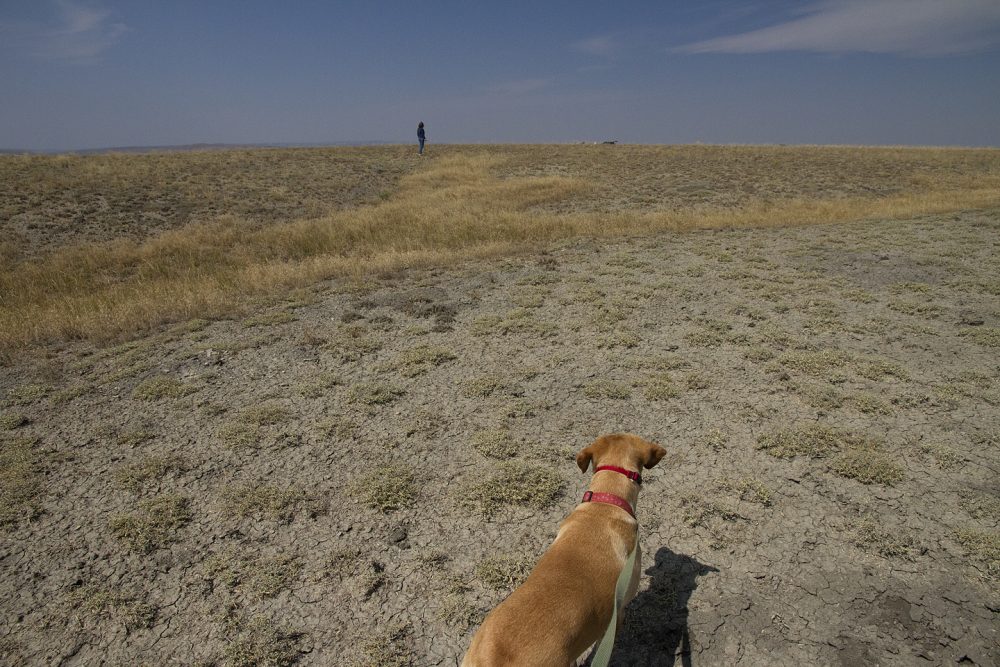 Every few minutes, I’d put on my protective glasses and look up, to see a larger and larger bite removed from the sun.

As the time grew closer, the temperature dropped from 78 to 66 degrees. And then, the quality of the light changed.

“Look at your shadow!” I called out to Deb.

The sun was high in the sky—a mid-day sun, so the shadow it cast was distinct and semi-accurate in size. But because more and more of that sun was being obscured, the light surrounding us had turned to dusk. Normally, late day shadows are elongated, like tall, skinny giants. But at sundown, there’s no observable shadow at all. This was the light one gets at sunset, combined with the shadow one gets at high noon. And the pairing was freaky. I moved my arms up and down. I turned to the side, I kept looking at my shadow, Ellie’s, and the shadows cast by the grasses. Mesmerizing.

Then Deb called out, “Mel, look to your left! It’s coming.”

And Totality rushed over the landscape like a wind. We were inside the umbral cone. Glasses no longer necessary, everyone looked up. A collective gasp. A group of college-age girls chanted Oh my God, Oh my God. There were shrieks and whoops. Where the sun had been, there was now a black disk in the sky, surrounded by a halo of sparkling light. I’d read that the reason there’s any light coming out at all is because the surface of the moon isn’t smooth—light comes through crevices to create what they call Bailey’s Beads, and the diamond ring effect.

Deb said, “The horizon! Look!” All around us, 360 degrees, was the pink and violet of sunset.

It is freakish, false, impossible even, this everywhere sunset, this trick of the sun disappearing behind the moon for 147 seconds. It seems the kind of thing one would go back to tell her people, and they would scoff, and she would insist, thereby becoming the village idiot, the one who swears she saw the sun blotted out as though by ink.

Two minutes and 27 seconds sounds brief, but when you are paying absolute attention that whole time, it can be quite adequate, can even seem generous. The rare light, the black coin in the sky, the rapidly cooling air, the pink horizon on all sides, the unbelievability of it all—I will just say it made one want to frolic.

When it was over, people began packing up, and we did, too. Weird, because there was still a miracle unfolding above us—for another 80 minutes, the partial eclipse of the sun—but as Annie Dillard said, “One turns at last even from glory itself …”

The spectacle we’d witnessed was the kind that might’ve sent earlier humans into a panic, that the world they knew was ending. But we humans and one canine of 2017 just got back into Deb’s Red Ford Escape, and escaped north. We were ragged from not enough sleep, but our senses were all hyped up.

It was 24 hours later, on a hike—Woodbine Falls—that I started noticing the totality effect. The Stillwater River is beautiful and rare, but there was also something new about the way I was seeing. A visual crispness. An easily accessed joy.

Back in Arizona, this continued. Normal things looked abnormally stunning to me: the shapes of clouds, the depth of the sky, the nightly palette of the sun departing. I was under a spell.

What I learned from the total eclipse was this: What wasn’t phenomenal? Everywhere I looked, something grand was there for the taking. Hills, grasses, rocks, trees, flowers, birds, butterflies, bees, a ripe tomato on a backyard vine. It only required showing up, opening all five senses, observing, noticing. The lesson was about standing still, anywhere, anytime. Give it two minutes and twenty-seven seconds, and something noteworthy will occur. Noteworthy just means worthy of noting. Everything is worthy of that. Even the mundane deserves our attention.

A couple weeks after my return to Prescott, Arizona, I was kayaking on Watson Lake. I paddled way across the lake toward a cove in the granite rock formations. I went in search of the Great Blue Heron I’d seen before, but on this day what I saw was sunlight bouncing off the water and onto the granite, mimicking the way flame looks in bright daylight. Colorless, this light danced and licked at the rock’s surface. Curious, I paddled myself closer, and it was as though someone had poured lighter fluid and struck a match. How does the light do that?

I kept my kayak in that spot for a full five minutes, watching. Five minutes is nothing, right? But it’s twice as long as the total eclipse. How often do any of us stop and observe anything, exclusively, for five full minutes? Even 147 seconds is time enough to be uplifted by the boundlessness of your own fascination.

It wasn’t a permanent change, but the totality effect stayed with me a short while, a string of days, like the fading tail of a meteor. Like the time it takes to fall from a plane to Earth. Like the margin where the sun’s corona peeks out from the craggy surface of the intruding moon, forming briefly, a gigantic diamond ring in the sky. (I mean, seriously, holy f*ck.)

For a smidgen of time after that, every single thing sparkled. 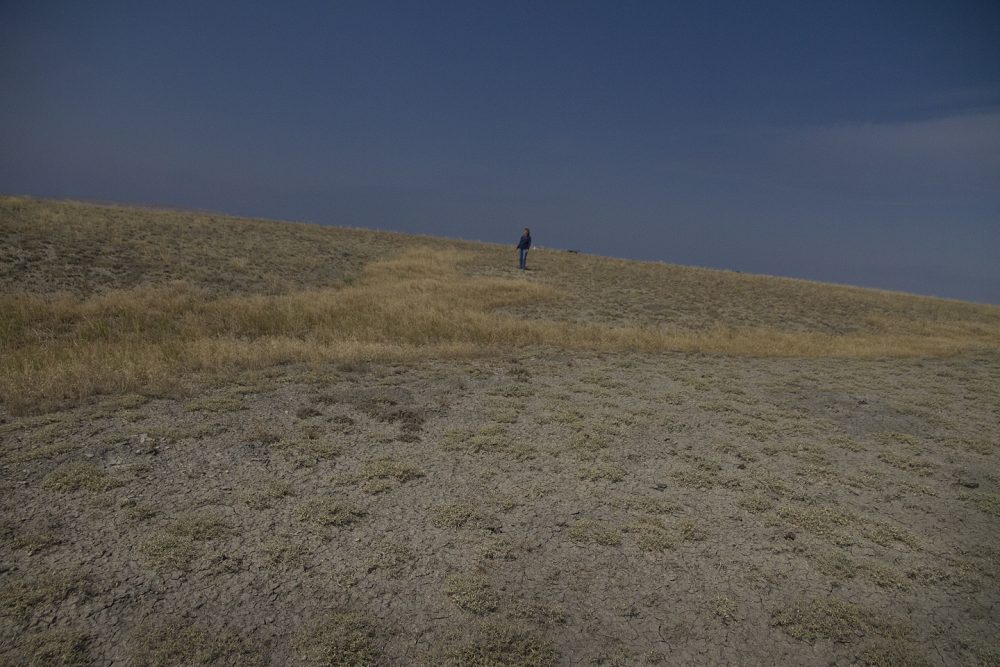 Melanie Bishop has taught writing or led writing retreats at Prescott College, in Arizona’s Sierra Ancha Wilderness, at Paolo Soleri’s Arcosanti, in the Cycladic Islands of Greece, and in Carmel-by-the-Sea, California.

Bishop recently took early retirement from Prescott College, where she was on the creative writing faculty for 22 years, and was founder and editor of Alligator Juniper, the college’s award-winning, national literary magazine. Melanie holds an MFA in Fiction from the University of Arizona, and was awarded a screenwriting fellowship from the Chesterfield Writers’ Film Project, co-sponsored by Universal Studios and Steven Spielberg’s Amblin Entertainment. The Makeover, a screenplay written during the fellowship year, later went on to place in America’s Best Screenplay Competition.