Today’s guest post is by Stuart Horwitz, author of Blueprint Your Bestseller. Find him on Twitter at @Book _Arch.

One thing I hear from writers a lot is, “My work has always been more character-driven, which I think is why I struggle with plot.”

I’m not sure what character-driven means in this context. Does it mean that their work is more about what people think and feel than about the things that happen? Maybe. But it may also simply mean, “I like to write really messy first drafts, and the only way I can find my way through the material at all is by identifying with a character or two.”

But guess what: First drafts are supposed to be a mess! And the notion of “plot” is a misconception that leads too many writers to get confused and focus on all the wrong things. In fact, the best way to produce a first draft is to produce a large pile of pages and avoid trying to organize anything at all. At first.

Upon hearing this, writers may ask, “How do I know when I’ve finished my first draft?” In a sense, first drafts are never finished; where you stopped writing is the end of the first draft. Then it’s time to step back and see what you’ve got. And the way I recommend doing this is by using the unfamiliar, plot-free concept of series.

What is this series I speak of?

A series is the repetition and variation of a narrative element within a story, the process of improvement or deterioration which creates the narrative arc.

Series is how a repeated phrase becomes the work’s philosophy and how a particular setting takes on significance. In short, everything that repeats and varies in your work is a series. But unlike the word “plot”—which basically means everything that seems to be important, all at once—you can work with a series. Once you begin looking, you’ll probably find that there are 10-15 series in your work if you are writing a book-length piece of fiction or nonfiction. When you find them, you can work with them individually first, which makes life much simpler.

Imagine just working with one series at a time. Let’s say you want to introduce 9/11 into your narrative. “Tricky! Overdone!” shouts the voice of the critic. “That must have been so awful for you,” says the voice of a sympathetic cheerleader. But neither of these approaches are particularly helpful. “Let’s wait and see,” says a neutral audience member. “Let’s see how 9/11 is used before we pass any judgment.” And that’s the real key, how something is used, not what it is in the abstract.

The second time you mention 9/11 your readers will be more keyed in. They will want to see what is different about the reference to 9/11 this time. That is the second iteration. In this and all following iterations you will want to either change the context and/or the content of how and when you bring up 9/11; that change is how emotion is generated in a narrative.

Thinking about one series at a time can be very helpful when you want to time your iterations as well. If, for example, you mention 9/11 on page 7 and on page 17, and then not again until page 297, you will have created a certain suspense by its absence. Was that your intent or did you just miss an iteration?

Series can also help with beginnings, middles, and ends. My guess is that this series we are discussing (9/11: present on pages 7, 17, and 297) is missing a middle. The “suspense” that has been created is probably because we forgot to fill in several blanks.

Now comes the best part. When you have a bunch of your series relatively clear in your mind, you can lay them out like individual strands of rope. You can entwine them in development, knot them together in conflict, thereby creating a net which ensures the overall work has unity. If you want to call that a plot, go ahead. But plots are awful to write. Like in the human body, the blood, muscle, and tissue all develop before the bone.

If you enjoyed this post, then I encourage you to check out Stuart Horwitz’s newest release, Blueprint Your Bestseller. Click here to view it on Amazon or download a sample to your Kindle. 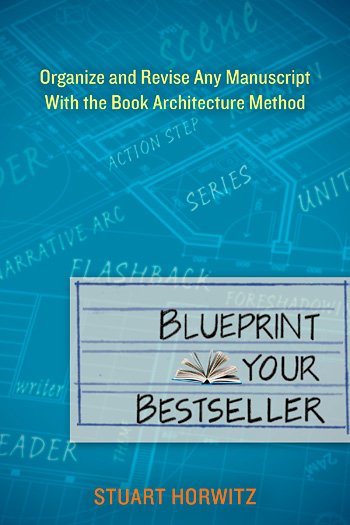