Today’s guest post is excerpted from How to Work With a Writer by editor Allegra Huston (@allegrahuston).

Many people who find themselves in an editorial role make the same mistake. They think they’re supposed to fix the book. They’ve identified the problems and they expend a lot of mental energy on coming up with solutions. The classic version of this is the film development executive who tells you to put in a car chase (yes, it’s happened to me). The story is sagging, the pace is dragging: you need some excitement! In this case, the car chase solution is like a sugar hit: a rush followed by dissatisfaction. Far better to address the underlying story issues—but it’s hard to do that if a car chase, or some other plastered-on idea, is occupying the center of the discussion.

Landing on a solution and sticking to it distracts both you and the writer from identifying what the problem is. I’ll talk later about what the problem might be. For now, I want to make this important point: once you’ve identified what isn’t working, stop there for now.

Remember: It’s not your job to fix it! Your job is to help the writer fix it.

Big-picture editing is a series of judgment calls. But how should those judgment calls be conveyed to the writer? I have formulated these two rules, which have stood the test of decades of working with writers from the most eminent to the most fledgling:

Too often people think being a critic means being critical. That’s only part of it, and not even a necessary part. A good critic assesses what’s strong ahead of what’s weak—because if a work has no strengths, why should anyone care what its faults are? And if, as a reader or editor, you don’t lift up those strengths, what yardstick are you measuring the rest of the writing against? And why should the writer even want to struggle on? I believe that if you can’t say what’s good about a piece of writing, you have no business telling the writer what’s not good about it.

But what if the work is really awful?

Let’s say you read the first 10 pages as a trial. You can stop there and say, “I didn’t connect with the story, so I guess I wasn’t the right reader for you.”

If you continued beyond the first 10 pages, what’s gone wrong? There must have been something promising, or you wouldn’t have kept reading. Was it the quality of the prose? Was it the premise or the subject matter? A character that drew you in? Praise what you can, but don’t tell the writer the work is terrific if it isn’t. Tell them in broad terms what didn’t work for you, but try not to get pulled into saying critical things you’d prefer not to say. The situation can get uncomfortable fast, so it’s best to stay vague and end the conversation as quickly as possible.

You may feel that the writer is wasting their time, but this isn’t your call to make. They may get better with practice, or they may be gaining benefits from writing that don’t depend on its quality.

This rule covers everything that is not praise—in other words, anything that’s not working for you as a reader. Remember: it’s not your job to fix the book. It’s your job to focus the writer’s attention on problems and spark the writer’s imagination about how to address them.

As an editor, I feel more confident if I don’t expect myself to know the solution to every problem. As a writer, I am far more energized by being asked to think about my work in a new way than by being told what to do.

The purpose of asking questions is not to get answers. Questions give the writer ideas. Prompted by your question, the writer may come up with an alternative plot event or character motivation, a clearer or different chain of argument or narrative, perhaps even an entirely different way of telling the story. Your question may help the writer articulate something that’s obvious to them but that isn’t at all obvious to you.

Asking good questions is somewhere between a skill and an art. You will certainly get better at it with practice. The best questions come from an imaginative engagement with the story or the subject matter, along with some background knowledge, which will differ according to what kind of writing you’re working on and the intended audience.

If you have a specific solution, remember that it might not be the best one. I usually say something like, “This may not be a good idea, but what if there was a car chase here?” The writer may have already tried that solution and it didn’t work. They may be viscerally opposed to it, perhaps because it’s a cliché. They may love it and be thrilled that you gave it to them. Or—best-case scenario—your idea sparks a better one. And the writer’s imagination is why you’re both here to begin with.

When you talk with a writer, don’t feel that all issues have to be solved by the time you stand up. You are not leaving the writer with a to-do list (at least, not in the early stages of editing). Your goal is to leave them with ideas to try out and explore—and, perhaps, a few things they can easily fix. Don’t be afraid to point out niggly little issues. It feels good to be able to fix a few things quickly. 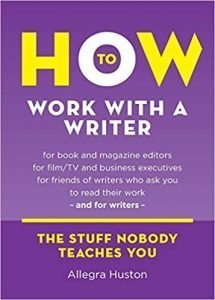 You may find the writer is touchy and resistant to suggestions. They’re not helping themselves in the long run, but it’s their work and their choice. You can try to crack the writer’s overly vigilant defenses by making them feel safe; praise will be your best tool. But you may have no choice other than to gracefully back away.

If you enjoyed this piece, be sure to take a look at How to Work With a Writer by Allegra Huston.

Allegra Huston has written screenplays, journalism, and Love Child: A Memoir of Family Lost and Found. After an early career in UK publishing, including four years as Editorial Director of Weidenfeld & Nicolson, she joined the film company Pathé as development consultant. She wrote and produced the award-winning short film Good Luck, Mr. Gorski, and is on the editorial staff of the international art and culture magazine Garage.