The narrative question, that key longing or conflict that forms the overarching driver of your story, shouldn’t be answered all at once, or too early. Writing that engenders reader questions creates suspense.

In order to achieve this paradox—revelations leading to mysteries—you need to create full-blooded characters and peel away the layers of their personalities, characteristics, intentions, and/or motivations slowly. One reliable way to structure this character-driven slow reveal is through the use of an unreliable narrator.

The Gathering, for instance, Anne Enright’s 2007 novel (which won the Man Booker Prize), opens with Veronica, the narrator, saying she wants to recount an incident from her childhood but doesn’t know if she can because she isn’t certain it actually happened. From that one statement, we know we can’t trust the narrator, but we don’t know why she’s unsure about the veracity of her memory. Is she warning us that her memory is spotty simply because of the passage of time, or is there a darker reason? Does she suffer from delusions? Is she mentally ill? In The Gathering, Veronica has to investigate secrets and lies to uncover the truth. If a character’s version of events cannot be trusted, the reader has to wait for the plot to unfold before the truth is revealed.

From a writer’s point of view, you’re on solid ground if you have a character struggle with remembering things. The Innocence Project, the nonprofit organization that works to exonerate wrongfully convicted prisoners through DNA testing, reports that mistaken eyewitness testimony is a factor in nearly three-quarters of their successful cases. Further, about a third of these exemplars relied on more than one incorrect eyewitness testimony. There is no implication (at least most of the time) that eyewitnesses purposely lie. Memory is dicey.

Further complicating the issue is that we humans tend to believe what validates our pre-existing values, so we complete our memories with what we assume is true. This process also occurs unconsciously, when traumatic incidents block all or part of a memory from forming in the first place. With the best will in the world, characters can insist they remember an event or an emotion accurately; they can speak with confidence, even with arrogance, and they can be dead wrong.

Some narrators are unreliable because they lack worldly knowledge. Perhaps they’re too young to understand the context or implications of events. Huckleberry Finn, the protagonist in Mark Twain’s 1885 novel, The Adventures of Huckleberry Finn, falls into this category. Huck is charmingly naïve, and because of his youth and inexperience, he misinterprets incidents and misreads people, which result in misunderstandings, wrong conclusions, and dangerous situations (like falling in with con artists). His choices are credible because his naïveté rings true. Huck’s view of the world enables readers to consider complex issues through innocent eyes, even when that view is a little skewed.

Since Huck’s life is complicated by Tom Sawyer’s determination to milk their adventures for all they’re worth, Huck’s innocence leads him to accept Tom’s plans at face value. For example, Tom designs an elaborate scheme to free the runaway slave, Jim, and the suspense—and danger—are acute. Only when the truth is finally revealed at the end of the book do we learn that Tom already knew Jim’s owner had died and willed Jim his freedom.

The delay in revealing this crucial information allows the suspense to build. The delay doesn’t feel forced, though, because we know Tom’s character. It’s completely in keeping with his nature that he takes unneeded risks and doesn’t think about the possible consequences.

Many unreliable narrators, however, don’t set out to tell the truth. Sometimes, as in Avi’s 1992 middle school novel Nothing But the Truth: A Documentary Novel, the narrator lies to cover up a weakness or a failure. Avi, (the pseudonym used by Newbery Medal–winner Edward Irving Wortis), used an epistolary structure to tell Philip Malloy’s story.

Philip, a New Hampshire track star, blames Ms. Narwin, his ninth-grade English teacher, for his poor performance in her class. Since he earned a D, he can’t try out for track, and instead of telling his parents the truth, he says he’s not interested in track anymore. When Philip hums the national anthem and Ms. Narwin takes it as disrespect, the issue garners national attention about the nature and role of patriotism.

An important theme running throughout the novel is the anatomy of truth. Various characters tell the truth as they know it or believe it to be, yet when the statements are taken together, we end up with, if not a lie, certainly a misrepresentation of the truth. Since there are multiple versions of the situation, readers have to wait until the book ends to learn the truth. From the start, readers might ask themselves if they can trust Philip’s version of the story since they know he’s lied to his parents, but they probably won’t. Most people will empathize with Philip’s dilemma and identify with his rebellion.

Unreliable Narrators: The Biased, the Stressed, and the Mentally Ill

In order for unreliable narration to work well, you have to have clear character motivations. In Paula Hawkins’s The Girl on the Train, published in 2015, for instance, one narrator, Rachel, is unreliable because she’s viewing the world through a haze of despair; another narrator, Anna, is unreliable because she’s prejudiced against Rachel. Although both women think they’re right—Rachel, believing that she’s hopeless, and Anna, believing that Rachel is out for revenge—in fact, both women are wrong. We don’t learn the truth until they trust one another, a transformation that doesn’t occur until the end.

The narrator of Ken Kesey’s 1962 novel, One Flew Over the Cuckoo’s Nest, Chief Bromden, is unreliable because he’s mentally ill, having been diagnosed with schizophrenia. While Chief Bromden reports events that include hallucinations, such as people expanding and shrinking and walls oozing with slime, the underlying theme of society condemning unconventional behavior in order to preserve its own standards chimes through. The dehumanizing nature of mental health care in the late 1950s is potent throughout the book, but the insidious cruelty of subtle control only becomes clear at the end, when Chief Bromden refuses to take it anymore. The final reveal, which frees him, is unexpected, and rights all previous wrongs.

To execute a slow reveal, you need to follow these steps:

Let’s say your protagonist, Alisha, a former corporate IT superstar, is now a stay-at-home mom. Scenes showing Alisha canning peaches and tucking “Atta boy!” and “Atta girl!” notes into her children’s lunch boxes imply that she is devoted to her husband and children. She keeps her hand in the computer world a bit by running a small online test-prep business from home.

Clearly, Alisha did the wrong thing by stealing questions to help her husband, but she did the wrong thing for the right reason—to help the man she loved. That she didn’t have a profit motive doesn’t change the facts of the case, but it might make the reader think she’s less bad, perhaps, than if her purpose was mercenary. Certainly the dichotomy adds complexity to the character and the situation. As each plot point is revealed, our view of the character shifts and suspense is heightened.

Shifting reader perception by layering in contradictory information works well in all genres, including literary fiction.

3 Techniques to Set Up Slow Reveals

Using statements that have multiple meanings, that are open to interpretation, or that beg questions are all smart ways of encouraging reader involvement and setting up situations that lead to slow reveals. Let’s take a look at each of these three techniques:

1. Statements with multiple meanings: Avoid overly general statements. To say, “She’s a happy baby,” is probably too generic. Adding specificity might lead you to qualifying that sentence to something like, “She always smiles!” or “She’s so interested in her environment,” or “She loves making eye contact.” These specific versions add credibility and interest to the bland and vague statement, “She’s a happy baby.” However, sometimes, you want to write in such a way that a general statement has multiple meanings.

2. Statements that are open to interpretation: Your goal is to write unambiguously. Purposeful ambiguity is another issue completely. You can integrate ambiguity into your characterizations to reflect that people are not one-note creatures; we’re multifaceted. You can even create a character with an alter ego, like the murder victim in Ed McBain’s 1971 police procedural, Sadie When She Died. The woman killed was Sarah, a shrew at home, but she was also Sadie, a sex-crazed swinger, when she went out at night.

3. Statements that beg questions: Writing statements such as “The make-up didn’t quite cover Lydia’s black eye” allows your characters to move in any direction you choose, setting up perfect scenarios for slow reveals. To flesh out this scenario, consider this exchange between an older couple, Frank and Poppy.

Frank slapped his armchair. “The son of a bitch.”

“Who else? You think Lydia has someone else in her life who hits her?”

“She says she fell down.”

“I’ll kill him. That’s what I’ll do, the son of a bitch. Then our baby girl won’t have to worry about falling anymore.” 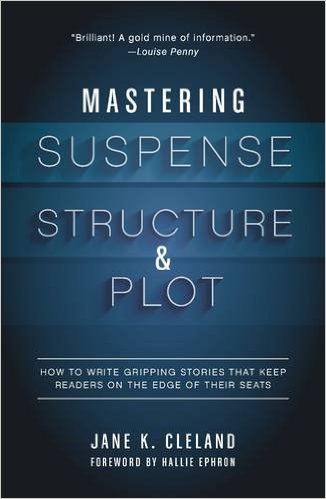 Then, one hundred pages later, while Frank and Poppy are still in the planning stages, we have this: “How could she have another black eye?” Frank demanded. “Ethan’s been locked up since Friday.”

Each of these approaches is a reliable way to create the kinds of subtle situations and complicated characters that lend themselves to slow reveals.

For more on creating suspense in your writing, check out Mastering Suspense, Structure, and Plot by Jane K. Cleland.

Jane K. Cleland’s multiple award-winning and IMBA bestselling Josie Prescott Antiques Mystery series (St. Martin’s Minotaur) has been reviewed as an Antiques Roadshow for mystery fans. Jane chairs the Black Orchid Novella Award, one of the Wolfe Pack’s literary awards, granted in partnership with Alfred Hitchcock Mystery Magazine. She is a past chapter president of the Mystery Writers of America/New York Chapter and served on the national board as well. Jane has both an MFA (in professional and creative writing) and an MBA (in marketing and management). She’s on the faculty of Lehman College, part of the City University of New York (CUNY) system. She also mentors MFA students in Western Connecticut State University’s MFA in Creative & Professional Writing program and is a frequent guest author at other university programs.