Today’s guest post is excerpted from The New Freelance by Amanda Layman (@amandamlayman).

When I began working as a freelancer, I wanted to find clients to pay me in the thousands. I sought out how-to books and blogs. I thought, with the right information, I would finally earn what I deserve. These books did help me fill in skill gaps and get better at the technical craft of writing—all the things I should have been doing anyways.

Once I figured out how to get writing jobs, I was working longer hours, seeking more clients, and somehow still getting paid next to nothing. I was missing something on the business side of things. An essential piece of the puzzle.

I figured it out in a coffee shop a couple years later, while I was busy trying to get some work done. I kept overhearing a business owner interviewing a potential employee for his security company.

The manager was a young man. His VP of sales was also young, ex-military, with a very permanent blank stare. Neither of them seemed book smart, but their confidence was through the roof, as if they both believed they were brilliant and on the cusp of dazzling riches.

The manager spoke enthusiastically about his business. I’m not sure if he was telling the truth, but he spoke confidently of his business growth and his ten-year plan to be the number one security company in the United States.

I realized I’d been seeing this all over the place for years: freelancers taking risks and solo creatives running businesses out of their vans. I had always assumed these people were different from me: he’s wearing a nice suit, she’s walking briskly. They were all going somewhere deliberate and they were not like me. They had more drive, more talent, more connections. They are smarter. More resourceful.

As it turns out, these other people have strengths and flaws like me. The only thing separating me from them was mindset. Everyone you meet makes millisecond judgments about you that guide their behavior. Act careless and a client will mark you as careless. Slash your hourly rate to get more work, people will see you as a low-skill grunt and treat you as such.

If a client was demanding too much for too little pay, instead of thinking, “I’m lucky to be doing this at all, I should just shut up and do the work,” or, worse, “I’m worth so much more than this client wants to pay me, I’m going to rage about this and fight for more,” instead, I thought, “As a business owner, keeping this client is not profitable.”

Ditched. Done. On to better things.

This mindset shift may be difficult if you, like me, often feel indebted to the world. It will take reminders every week, every day, maybe every minute. But it will work.

The shift was colossal. Because I became more ambitious and started taking myself seriously, I began attracting clients that treat their business the same way. The pay became higher, and quickly. My satisfaction increased, and the quality of my work improved.

I can’t force a mindset shift on you: you have to do that yourself. But try and live these tenets and you may have a similar awakening.

There are millions of decent freelance writing jobs out there, thousands of great ones, and hundreds that may be just perfect for your availability and skillset. It’s like dating, in that way. Just because you’re having a decent time with your date doesn’t mean you have to get married. Respect yourself and be discerning.

A strange thing happened when I turned thirty. A filter kicked in. I learned how to say “no.” Not just to clients, but to all things irrelevant to me. Instead of shaping myself to fit an opportunity, I would simply move on, recognizing that there were other, more fitting, endeavors to spend my time on.

Believe me. There are always more opportunities, and you will not die from turning one down.

This isn’t to say you can only be one thing. We are all multifaceted. But when it comes to your writing, especially when you’re starting out, you must focus on the writing itself and identify the type of work you’re best at. As of this writing, I write marketing and advertising content for small businesses. As an expert in a niche, I can command a higher rate and obtain bigger clients.

2. Be a Fairy Godmother

The curmudgeon believes there are a limited number of opportunities, and when other writers succeed, that’s one less opportunity for her. But she is probably pretty confident because she’s been doing this for years, her skin hardened through the tough transitions brought by the digital age. She complains about content farms (rightfully, but a bit too frequently). She complains about people in foreign countries writing English articles for pennies.

The other kind of writer smiles genuinely. She’s the type who alerts her friends to new writing opportunities, or passes projects onto them when she thinks they’d do a better job. She is quick to give advice and share her tricks of the trade, and she keeps cynicism to a minimum. The fairy godmother cares about your whole life, not just what she can get out of networking with you.

Helping other writers succeed isn’t about some kind of intangible karmic magic. No, helping others has a very practical purpose. The publishing industry may seem huge, but we are incredibly interconnected. The colleague you ignore today may be the editor of the magazine you’re dying to write for tomorrow.

Clients will never think to pay you more. They aren’t trying to make your life miserable, they are just making a decision for their business. If you are an awesome writer and they can get your services inexpensively, they’ll do it. But if you raise your rate, there’s a good chance they’ll still want to work with you. If not, you’ll find other clients who only work with writers of a higher caliber.

It’s counterintuitive, but you can actually have a harder time getting clients if your rate is too low. People are wary of an extreme discount; they may become suspicious of the quality of your work.

Don’t be afraid to negotiate; many clients expect it. Give them a quote, and if they come back with another idea, send a counter offer. Don’t just take what they’re willing to give you because most of the time they’re just guessing. And it’s not like this terrifying Shark Tank situation—you don’t have to stand before a panel of judges. Negotiation can be quiet and written, and often is. Don’t forget that you’re a writer; writing an email to ask for more money is no big deal.

I won’t forget the time I raised my rate to $40 an hour. I had done some research and realized I was severely underpricing myself, so it was time for a change. I had done a couple of assignments at my former rate for a new client on Upwork, and the client came back to me a couple of months later ready to assign something new.

I told them my rate was higher now, and things turned sour very quickly. Here’s how the conversation went:

Me: I do have the availability for this, however, my rate recently changed. My new rate is $40/hr. My time estimate for the 5 press releases is between 4-6 hours.

Client: What do you mean. I am comfortable at the rate we agreed on. I would like to continue that contract.

Me: In that case, I will probably have to close the contract. I signed on with you for an initial project at $30/ hr and completed that project successfully; I would understand requesting we continue at that rate if I hadn’t done the initial project we agreed on. But since this is a new project and I’ve recently changed my rate, I can’t continue unless we open a new contract. I understand if it’s outside of your budget—I’m sure you can find another writer closer to the rate you’re looking for. Thank you!

Client: I don’t understand though. Why are we subject to a rate change? What about next month, if you decide to change it again, then we will be forced to pay the new rate again? $30 to $40 is not a small jump. I was hoping to be a long term client of yours but a increase of $10 (30%-ish) is not small as I mentioned.

Me: I really understand. If you need to find another writer, that’s OK. I made major changes to my business and my role, and don’t have as much availability to freelance now. In addition, Upwork changed their pricing structure, which I know impacts your side, too.

It went on like this until I finally agreed to do one last project for $35 an hour instead of $40—which I shouldn’t have done. After that, I stopped writing for this client.

What I have found is that those who nitpick about one thing are likely to be hard to please in other areas, too. There will always be clients hoping to get more for less, but there will also always be good, honest clients who see the process of working with freelancers as a collaborative one.

People love to say this to creative people. Sometimes, your very own sage professors from the literature department will say it like an omen. Other times, friends and family coo it at you, with the intent to protect you from the cold, hard, terrible world. Other times, they say it because they’re jealous assholes.

Well, I’m here to tell you not to worry about failing. You have my permission to tell anyone who says otherwise to f— off. Or, if you love them, a mere “Thank you” will do.

To write for a living, you have to think in small steps, and remember that any excellent project comes from many small efforts over a long time, often by many talented people working together.

So, when you find yourself obsessed with failure, revisit your mindset. If you perceive writers as brooding, impoverished types, that is what you’ll become. On top of that, if you associate being poor with being virtuous, you may develop a moral obligation to fail. Failure will enhance the brooding, and before you know it, you’ll be exactly like that terrible media archetype that won’t die—the heartsick ascetic, standing alone in her loft clutching her unpublished manuscript, eyes cold on the moving world below.

Don’t concede to a warped reality. You’ve got this. 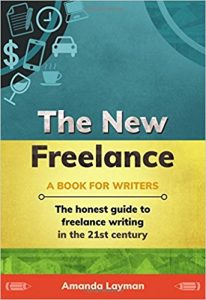 If you’re determined to pursue a freelance writing career, you will succeed. Period. In the United States, as of 2016, about a third of workers are independent contractors. Businesses are investing more in writers than designers, social media managers, and several other marketing-related roles combined.

With the current state of technology, there are a million ways to succeed as a writer. The only true way to fail is to stop writing.

If you enjoyed this post, be sure to checkout The New Freelance by Amanda Layman.

Amanda Layman has been freelancing for over a decade. She is the founder of Tigris Content Strategies, a content marketing firm. The New Freelance: A Book for Writers is her first book.