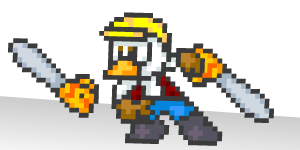 Chainsaw Chuck by The Static Cling / via Deviant Art

What makes a novel compulsively readable? Author and professor Benjamin Percy set to find out when The Girl With the Dragon Tattoo became a sensation several years ago. He describes a process he used to analyze the book’s structure:

I began to color code the major problems the characters faced—blue, black, red, green, yellow, pink, purple—and to track page numbers. Larson would introduce a blue problem on page 25, return to it on 78, 169, 240, 381, and so on, each time ratcheting up the tension and complicating things further. Interspliced with the blue problems were red problems, pink problems, a kaleidoscope of trouble, ever-changing.

I have come to call these flaming chainsaws. Your success as a storyteller has to do with your ability to juggle them. Every time the flaming chainsaws pass through your hands, they gain speed, become more perilous, until at last they are extinguished.

Read all of what Benjamin has to say in his essay “The Dance of the Flaming Chainsaws,” over the new Glimmer Train bulletin.

I do my best to keep my story’s chainsaws burning and in the air! I have to admit, I like complex stories, but it’s hard to juggle so many chainsaws at once. Fun post. 🙂

Hugh Howey’s ‘Wool’ is also a good example of this novelistic structure: juggling various storylines in alternating chapters that all come together at the end. It makes the book hard to put down because you’re interested in each storyline.

As a reader, this is good stuff. I am glued to a book that handles this well. As a writer, it’s a challenge. It’s like using a push mower, you want the hands-on, “involved” aspect of the job but you have to be extremely careful not to let it out of your grasp and it’s running wild with you frantically chasing behind. Great post as always!

This is great advice and I’m in this process currently with my editor. I have some great drivers but don’t carry them through all the way and I have multiple characters with what could be great subplots. Are there any other bulletins from him on how exactly to trace the flaming chainsaws? Detailed methods- because I think this is such a great idea and would like to implement this in my revisions. Thanks!

I’m not sure Percy is following this, so I’ll jump in with a few book recommendations that might prove helpful:

The Bell book is nearly a classic and I highly recommend it if you’re interested in formalized, systematic approaches.

Really interesting way to think about conflict and tension. Thanks for the post!

[…] Does Your Story Have Flaming Chainsaws? | Jane Friedman […]

Great fun article. I wrote a romantic suspense/murder mystery, and killed off a character by page xii in the prolog, lol. Trying to maintain the suspense and “what’s going to go wrong now” was a challenge, but now know my inner chainsaw works pretty well. This article will keep the blades sharp!