This post offers a sneak preview of what we’ll have to say.

Very often, when people talk about strategies on Facebook or Twitter, they’re discussed as if they exist in a vacuum and didn’t form part of a cohesive effort involving blog or book content.

The following chart illustrates how social media commonly serves as a place for me to discuss and share content appearing on my blog (or elsewhere), but also helps (new) people discover my content. “True fan” engagement typically happens through email or paid services. 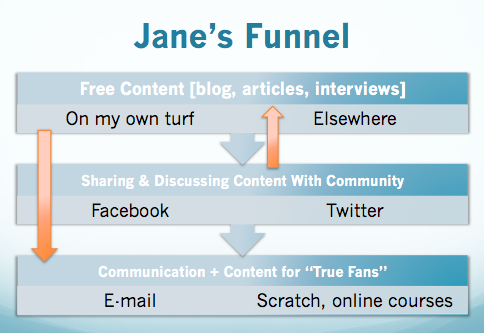 L.L. Barkat’s Portrait of an Author

L.L. Barkat will discuss two portraits of authors who have published through her publisher, T.S. Poetry Press. Here’s one.

Poetry at Work by Glynn Young

Porter Anderson’s Twitter-to-Article (and Back Again)

These slides from Porter Anderson illustrate his strategy in developing cross-platform content that builds on social-media interaction. 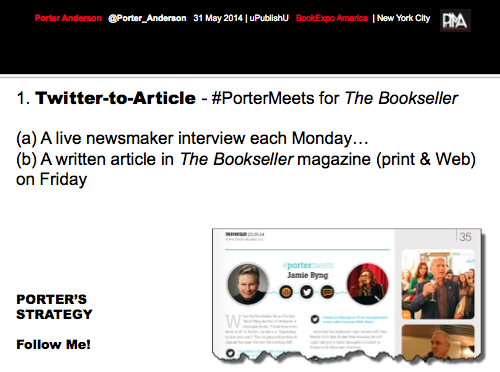 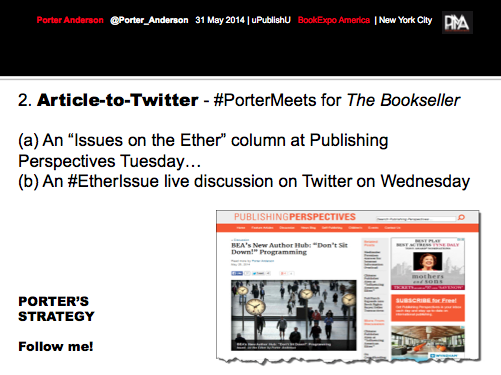 Jeanne will discuss the role Twitter has played in her career, and what her strategy has been. Here’s a preview:

I created my Twitter account to help get attention to our adaptation of the Pulitzer Prize-winning book, Slavery by Another Name. While I do talk about the screenplay on Twitter, my account has a general “theme” of screenwriting, screenwriting advice, being motivational, inspiring and accessible. People are drawn to my account because I interact and treat Twitter as if it’s my water cooler. My suggestion would be to create a “theme” for what your tweets will be, similar to how you create a “theme” for your website. Be consistent, informative but also show your personality. I get more followers by being ME than by tweeting out news. Decide what you want to let the public see and be brave in how far you’re willing to go. And, I tweet about liquor. Unprofessional? Maybe, but that’s how I met Jane.

With over 28K followers, I can’t possibly follow everyone back, but I do “follow” almost 9K. But that doesn’t mean I pay attention to all of them. I use well-thought-out lists to categorize the important ones so I don’t miss the people who share great content.

If you’re at uPublishU, please say hello and introduce yourself—and consider live-tweeting the panel for those who can’t attend. I’ll try to capture a decent audio recording and post it here after the show.