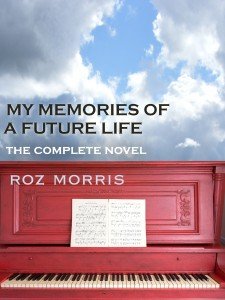 Like many writers who enjoy blogging, my platform is a writing advice blog, Nail Your Novel. That was perfect when I was releasing my writing book by the same name, but my fiction wouldn’t necessarily appeal to those readers.

Also, it’s easy to sell a book you feel might be useful to people. No one, frankly, needs a novel. You have to hope they like the look of it when they’re in the mood to amuse themselves with a yarn.

So my biggest problem was tempting readers without making the novel a throwaway price.

My Memories of a Future Life is an eerie twist on reincarnation stories, where a trauma in a past life haunts a character in this one. My narrator is a concert pianist with a career-threatening injury who gets involved with fringe healers offering miracle cures.

Editors said it reminded them of The Time Traveler’s Wife, but they asked me to make it more conventional, like a time-bending murder mystery. However, I wanted to explore deeper questions and take the story in unexpected directions. Going indie was the obvious choice.

I talked it over with my agent. Do it, he said. “And while you’re at it, let us know how the experiment goes because we’re looking into models for e-publishing too.”

With such a mandate, I set forth on my adventure. And here’s how it went.

Readers definitely tried my book who wouldn’t have otherwise. Typical reviews went like this:

I normally read crime, or fantasy, or historical or thrillers but I really enjoyed this.

I don’t usually like literary fiction, but this is a proper story.

I’d never have thought I’d enjoy reading about a concert pianist living in London with a gay flatmate but I was hooked.

Launching in parts brought faster feedback. Reviews were appearing on Amazon after a couple of days as people got to the end of episode 1.

There was more buzz on Facebook and Twitter, with people getting excited about the next episode. I had a theoretical hope that it might built a great sense of community among core readers, like fans of the TV series Lost. As well as talking to each other, they talked to me.

Once I’d released part 3, they were chewing through the e-mail wires trying to persuade me to give them the last part immediately. I don’t think I’d have had that kind of engagement if I’d put the book out as one conventional volume. It gave me many excuses to keep the book on readers’ radar.

How I marketed the series via social media

In all, I did 4 launches for the one book. The first episode was well attended and the others less so, but announcements went into people’s inboxes and kept the book in people’s awareness even if they said no or ignored it.

Advertising is all about opportunities to get your product seen, and although we filter out what we don’t want, a sustained campaign stays in people’s peripheral vision. Eventually, if they’re interested, they’ll look at your book properly. And they did—new people bought episode 1 throughout the campaign and a few still are. It allowed me to keep the campaign fresh. We’ve all seen the tweeters who send out the same message week in, week out. Launching 4 times gave me more natural ways to offer new material.

How I used Amazon to best advantage

Having 4 episodes means I could put it in 8 different categories in the Kindle store. Some Amazon customers browse by category. If you put your book in general fiction or literary fiction it is much less likely to be seen against the books with massive marketing power, but in a niche category you can chart with modest sales—which means you get featured.

The genre flexibility that scared traditional publishers qualified it for at least eight categories in the Kindle store. Having 4 editions meant I could put it in all of them. I charted in suspense, music, metaphysical fiction, reincarnation, contemporary fantasy, medical fiction, women’s fiction—and in many cases made the top 10. Then, when I put up the whole book, I used that as market research to choose the best categories.

The uniqueness of my launch made me new friends in the industry. When I announced I would serialise my novel, I had an email from a small publisher who told me they’d been hatching the same idea. Not only had I pipped them to the post, my blog articles about methodology had solved some problems for them! So we clubbed together and issued a press release to the industry, allowing us both to bask in a little publicity. I’m not sure if this had any effect on my sales, but it never hurts to make another friend in publishing.

What didn’t go so well

Here I’m going to get coy and not reveal actual figures. Several reasons: a good sales figure for me might be paltry to you, or the other way round. Also this book is newborn; all books take time to find their feet. And fiction probably takes even longer than nonfiction.

The most accurate comparison is with my writing book, Nail Your Novel, which I released six months ago. My platform has grown since then, but is the same demographic of readers. They were perfectly suited to Nail Your Novel, should they be inclined to buy a book on writing. They were not necessarily the target audience for My Memories of a Future Life.

Taking that into consideration, my launch was a great success. In this first month I’ve sold more copies of My Memories of a Future Life (episode 1) than I sold of Nail Your Novel in its first month. People who bought episode 1 are coming back for the others, or going straight for the paperback, or tweeting about how they haven’t had time to read very far but are still enjoying it.

In marketing parlance that probably means the book has a tribe—arguably a more active one than would be possible with a one-off launch. Whatever we call it, we all had a lot of fun, which can’t be bad. My Memories of a Future Life is now available in full, undivided form on Kindle (US and UK) and also in glorious, doormat-thumping print. The price of the individual episodes will stay at the launch offer of 99 cents until October 15, and will then go to their full price of $2.99 (U.S.). They’ll always be available, but if you want to get them at the launch price, visiti Amazon now. You can also listen to or download a free audio of the first 4 chapters right here.