If you hadn’t noticed, it’s the time of year when every publication, website, blog, and well-known book critic releases a “best of the year” book list. At Goodreads—the largest social media site for book readers—the strategy is unique: they have site members decide on the best books during three rounds of voting.

This year, in the poetry category, the award went to Amanda Lovelace’s The Princess Saves Herself in This One, self-published in April. Goodreads has written a case study charting how the book gained momentum within the community, but I was curious about how Amanda was able to achieve visibility for her book—which led to landing a book deal with publisher Andrews McMeel.

I first reported on this story for The Hot Sheet, the industry newsletter for authors that I publish with Porter Anderson. What follows is the extended version of my Q&A exchange with Amanda. My thanks to her for providing such detailed insights.

You tweeted that people should take book bloggers more seriously—that they made your book happen. Could you elaborate further how book bloggers became aware of your work?

I’m a years-long Tumblr user who established a reputation as a feminism/book blogger near the time Tumblr really started taking off as the place to be (even now, Tumblr is still the blogging website that’s the most accessible and easy-to-use). Back when I was trying to help form a more cohesive online book community with other avid readers on Tumblr, I helped unite us by coining the community label “booklr”, following in the footsteps of Tumblr communities such as “fitblr.”

I made myself known in the booklr community for being an open and honest book blogger, and later, as a cautiously hopeful writer. Thus, when I announced the existence of my poetry collection, I didn’t have to proactively contact any book bloggers to promote it—booklr was ready to support me from the get-go. 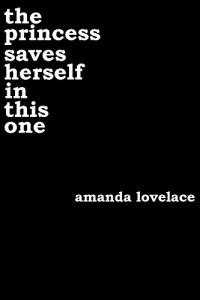 From what I’ve observed, when writers try to “invade” the booklr space to use the members as simple marketing tools and nothing else, it doesn’t work out for them too well. The booklr community wants to get to know you first and see what you’re all about before deciding to commit: What are your reading habits? Are you feminist? Do you support diverse reading? Do you support #ownvoices? What’s your opinion on Harry Potter? What’s your cat’s name?

You have to become involved in communities without the plan to exploit them. Don’t even let it enter your mind. When the time is ready, your community with be happy to support you in your endeavors. After all, that’s what community is all about.

When I first self-published my book, I took the advice of my previously self-published critique partner, Danika Stone, and enrolled my book in the Kindle Unlimited program. The thing with booklr is, we are a diverse and closely-knit bunch, so we know what the economic realities are within the community—not everyone can drop $2.99 on an ebook any time they feel like, so many of them join the Kindle Unlimited program so they can read as much as they want for a low monthly fee. This was always in the forefront of my mind.

And it’s not just that I wanted people to easily access my book to “hype” it up; I genuinely wanted to help people—especially young girls—through my story. Making the ebook edition more accessible than it would have been otherwise certainly boosted the appeal and therefore my chance to connect with others who had shared experiences.

Additionally, you made the ebook free to anyone with a Kindle app when it was chosen as an Ace Book club pick. (Note: Ace Book Club is a Goodreads book club.)

[That] made it incredibly more accessible, and by that time bloggers had established so much buzz about my book that the community-wide plunge was only natural. From there, booklr’s passion for spreading a love of books and reading carried my book across all social media outlets—Tumblr, Twitter, Instagram, YouTube, etc. All I did was post a simple announcement on my Tumblr blog. The other book bloggers were the ones who got their hands on it, genuinely loved it, and did everything within their power to make my book “happen.” And they did.

You see this so many times, over and over. For example, authors like Rupi Kaur and Sarah J. Maas—they’re such incredibly talented writers whose online communities helped to establish them enough to gain them the recognition they felt they deserved. To my knowledge, for Kaur, it was Instagram and Tumblr. For Maas, it was Wattpad. Online community also helped to boost successes like r.h. Sin, Anna Todd, and countless others. The communities we become integral parts of genuinely want to see us succeed. In that way, community is much more powerful than any paid ad you can ever run.

Do you spend an equal amount of time on Twitter, FB, and Instagram—or is Tumblr your preferred place?

The first social media platform I used to promo my book was Tumblr. In my opinion, Tumblr is extremely underutilized by the publishing world. It’s taken much less seriously than sites like Instagram and YouTube, which is mind boggling. I don’t think the publishing world realizes that the book community on Tumblr is massive. Because Tumblr offers so many different posting options (text, photo, video, quote, etc), it exists as a mixed bag where there’s always something for everyone’s different tastes.

In the booklr community, you get to choose from book review blogs, book photography blogs, book quote blogs, book playlist blogs, book edit blogs, etc. Most book blogs are a mix of every book-related thing imaginable. There are just SO MANY different ways to spread the love for books on Tumblr, unlike sites like Instagram, where you’re pretty much stuck with a single photo and a description most people won’t read since it’s stuck behind a “read more,” and users only want to scroll through for a quick minute or two.

From Tumblr, I moved on to Twitter, where a nice portion of my Tumblr followers already followed me, as well as Instagram. Twitter is extremely useful in promo because retweets are a Thing (much like the reblogging option on Tumblr), so the word spreads fast if you have enough followers to gain traction. I’ve always used Instagram for promo here and there, but I feel like it’s been far less impactful than Tumblr and Twitter put together—again, probably because of the lack of posting options. Too repetitive and samey-samey.

Do you know how the Ace Book Club at Goodreads became aware of your book and made it a selection?

The Ace Book Club is actually a subgroup of F*** Yeah Asexual on Tumblr. Since I’m on the asexual spectrum, I followed their blog and frequently reacted to their posts. After a while, this caught the attention of the creator of F*** Yeah Asexual, Tiffany Rose, a fellow ace bookworm. When she announced that she was starting Ace Book Club back up and wanted ace spectrum authors to fill out an application to have their book considered for July’s read, I took the chance! If there’s any advice in this, it’s making yourself known in all of your communities, because they’re almost always happy to support you and boost your voice. Your success is their success, and not just in terms of monetary value. The very fact that I’m a successful asexual author raises awareness for the asexual community as a whole.

How did Andrews McMeel find out about your work?

My editor, Patty Rice, noticed that the princess saves herself in this one kept popping up in various places online, so she decided to order it. Lucky for me, she read it and loved it enough to contact me, and then pitched it to the rest of her Andrews McMeel team, who agreed with her praise!