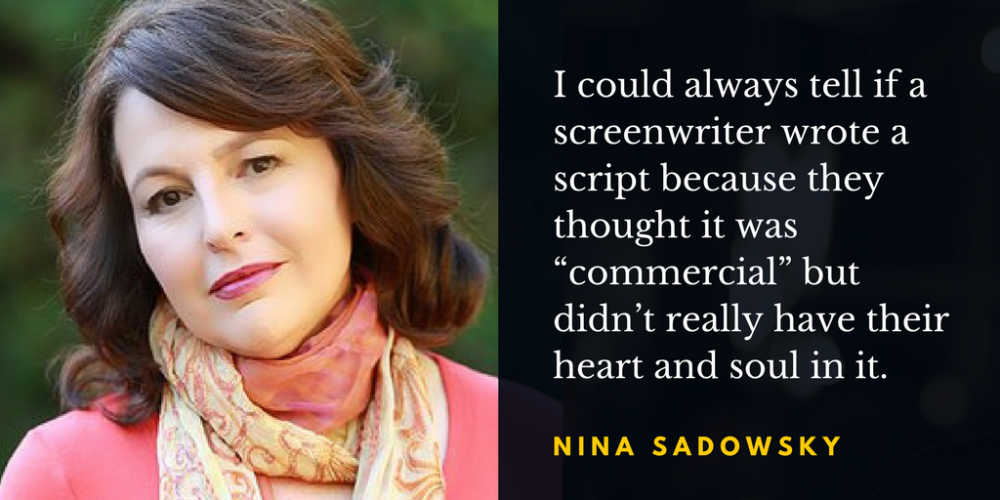 Nina R. Sadowsky (@sadowsky_nina) is a recovering entertainment lawyer who has worked as a film and television producer and writer for most of her career. Just Fall, published by Ballantine in March 2016, is her first novel, and is now in development as an original series for STARZ. Her second book, The Burial Society, releases in January 2018. She has written numerous original screenplays and adaptations and done rewrites for such companies as The Walt Disney Company, Working Title Films, and Lifetime Television.

Sadowsky served as executive producer for the hit film The Wedding Planner, starring Jennifer Lopez and Matthew McConaughey for Intermedia and Sony, produced Desert Saints, an independent film starring Kiefer Sutherland which premiered on Cinemax, and has served as executive director for numerous other films.

Recently, Nina took some time to answer questions via email about how screenwriting influenced the writing of her novel.

Is there a screenwriting technique or three that influenced your novel writing, and that others might benefit from knowing?

Develop multi-layered characters and let the story be driven by their actions. A strong protagonist needs a worthy antagonist. Know both the universal themes you are addressing and the specific thing that you as an artist bring to the telling. Understand the genre you’re writing in. Know the audience you want to reach. Does your story have significant stakes and real conflict? Is there a catharsis for the reader or the viewer at the end of the story?

But specifically, screenwriting teaches one about using words economically. Also, I use the experience of making films to help me when I’m writing in this way: Before I write a scene, I close my eyes and try to envision what every film department would have to bring to the set in order to realize the words on the page. What does the lighting look like? How would production design see this environment? What props would be used? What wardrobe? Many people have commented that my writing is very visual and I think this is why.

This may be controversial, but I don’t believe in writer’s block. Writing is a job and must be treated like one, by which I mean, one can’t only write when “the muse” strikes. If I have a day scheduled for writing, I write. One thing about working in film and TV is that they are collaborative mediums. Rafts of people are often waiting on the pages that serve as the roadmap for them to do their jobs, so being late on a deadline is no simple matter.

Are there ways a novel can be written to give a better chance that it might be picked up for a movie? Is thinking about that a good idea or not?

It’s always a crapshoot! The film and TV businesses are capricious and difficult to crack. I don’t believe in thinking about outcome, by which I mean all writers want their work to be read and all filmmakers want their work to be seen, but I think that desire has to be tucked away and one has to concentrate on the work itself. When I was producing full time, I could always tell if a screenwriter wrote a script because they thought it was “commercial” but didn’t really have their heart and soul in it. Personal connection to the material is always important and I think it shows in the work. When I wrote my first novel, I abandoned any thought about outcome. I just wanted to fulfill the commitment I made to myself to finish it.

Entertainment Weekly called Just Fall “a tense, wild, fever dream.” What strikes me is the rapid pacing, without feeling rushed. How were you able to accomplish this?

Because I was gleefully abandoning the highly codified structural requirements of film and TV writing, I wanted to play with structure. So the book has “Now” sections that are all linear and “Then” sections that are deep dives into the characters’ pasts, which are non-linear. I wanted the “Then” sections to be juxtaposed for character rather than advancement of plot, without losing the story’s momentum. As a result, my dining room table was covered with index cards for months as I played with and solidified the structure.

Do you feel that novelists have been told to strip out too much of their description? How do you decide when to use such details and when to leave them out?

One thing screenwriting teaches you is to be specific and brief in description. Specificity is required because details like make of a car or an amount of money have to be supplied by the relevant department on a film crew. Such details can also be very indicative of character, what kind of car someone drives, what they purchase, what color their clothes are, all these things can help visually reveal information about who a person is, which applies to all writing. But I think every writer has to find their own balance. I just try to think about what details will add color, flavor, mood, or character specificity to a passage and use those.

The inner dialogue of your characters is pared down yet effective. Any tips for novelists regarding the amount of inner dialogue and knowing what is too much?

The best thing about writing novels is inner dialogue! What a luxury! One of the toughest challenges of screenwriting is conveying thoughts through character and action, rather than straight narrative. But whether I’m writing description, dialogue, inner dialogue, etc., I always ask myself this question: What are the essential beats needed to tell this scene? Once I’ve stripped my writing down to that, I add just a little to gild the lily. I believe this economy of language and information helps keep my pacing fast and entertaining.

You’ve recommended Save the Cat by Blake Snyder. Is there something in particular that novelists can benefit from in that book?

Save the Cat is a great book on structure for screenwriters. And while novel structure and film and TV structures are all quite different, understanding the value of structure in any form is valuable. I often liken storytelling to inviting people on your river rafting trip. The guests come aboard and a good writer steers them effortlessly through the shallows and the rapids, the rocks and the waterfalls, and delivers them breathless and satisfied on the other side. That is the power of good structure, making that ride seem effortless.

You’ve said that anyone who is married “knows there’s no such thing as happily every after. Everybody knows that’s where the trouble begins.” Is this one example of universal themes that Just Fall addresses? Do you start with themes, sketched out in your outlines, or do themes evolve?

I sometimes rough out individual scenes based on people or situations I’ve encountered (as put through my writing prism) and tuck them away to find a home for later. But when I start any longform work, pilot, screenplay or novel, I always think long and hard about the themes I want to explore. 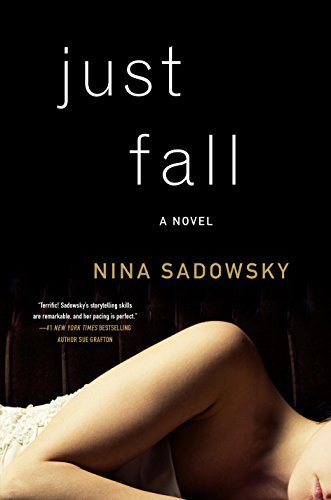 I’m not really a math person, but I always loved algebra, and I think a lot of writing is comparable to the idea of “solving for x.” By this I mean determining all the elements that make your story plausible on its terms, filled with characters that are real and relatable, compelling to read and satisfying emotionally, all while making these tasks seem effortless. If you don’t know what you are talking about, the characters through which you synthesize your themes have no anchor to their actions. I’m a big believer in character-driven plot, so part of my pre-writing process is deciding how the various characters feel about the themes I’m exploring.

What I meant by “that’s where all the trouble begins,” is that pop culture has created this myth of the “happily ever after.” Love stories are primarily about the chase and the obstacles to a couple getting together, with the proposal or the marriage being the end goal. Anyone who’s been married knows it’s damn hard work, filled with compromise, regret, frustration and alienation along with partnership, love, elevation and the joy of selflessness. I wanted to explode that myth of the happily ever after, and explore how emotionally complicated marriage can be but blown up with the stakes of a life and death thriller. Another related theme I wanted to explore was the extent to which we will compromise our own values in the name of love (or because of the other more twisted things that keep people in relationships). Do we let our moral lines creep? Shatter? What would you do to save someone you loved? What would you sacrifice? These questions also lent themselves to the thriller genre.

With Just Fall you’ve said you wanted readers to ask themselves “What would I do?” Will this concept carry through to your next book?

I always think the question “What would you do if….” gets very different answers depending on how it finishes. For example, “What would you do if a stranger was in danger and you could help?” Ok. Most of us would like to think we would help. How about if helping that stranger put you at risk? You might think twice. That’s survival, primal.

But what is your answer if a stranger is replaced by your sister, or wife, or lover, or child? All of our moral lines can shift. With Just Fall, I wanted to challenge readers to question their own moral lines.

The Burial Society also looks at sacrifice for love and family, but the strongest theme I’m examining in this novel is redemption. I also examine the nature and power of secrets; information withheld from intimates (whether friends, lovers or families) is often more compelling than the information that is shared.

You say a writer must know “the specific thing you as an artist bring to the telling.” Can you give an example?

Sure. Just Fall explores the darker sides of attraction, love and marriage and I started the book shortly after my own second, mid-life marriage, which included the explosive task of blending a family with four teenagers. I went in thinking “love conquers all,” and “love begets love,” and soon discovered I was living with strife, division, and conflict. Love did not conquer all. Patience, work, sacrifice and compromise have since conquered a lot, but even now, several years later, not all. Just Fall is about that tumultuous time in my life as much as it is about Ellie and Rob, their lives in New York and their adventures on the island of St. Lucia.

Cathy Shouse’s articles have appeared in Family Fun, The Saturday Evening Post and Indianapolis Monthly, as well as The Romance Writers of America national magazine (RWR Romance Writers Report). She writes contemporary romance and assists writers with promotion at every opportunity. Visit her website or find her on Twitter at @cathyshouse.