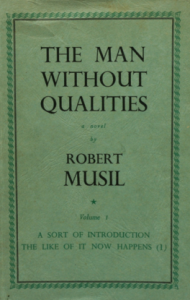 From The Man Without Qualities by Robert Musil:

“At this moment he wished to be a man without qualities. But this is probably not so different from what other people sometimes feel too. After all, by the time they have reached the middle of their life’s journey few people remember how they have managed to arrive at themselves, at their amusements, their point of view, their wife, character, occupation and successes, but they cannot help feeling that not much is likely to change any more. It might even be asserted that they have been cheated, for one can nowhere discover any sufficient reason for everything’s having come about as it has. It might just as well have turned out differently. The events of people’s lives have, after all, only to the least degree originated in them, having generally depended on all sorts of circumstances such as the moods, the life or death of quite different people, and have, as it were, only at the given point of time come hurrying towards them—Something has had its way with them like a flypaper with a fly; it has caught them fast, here catching a little hair, there hampering their movements, and has gradually enveloped them, until they lie, buried under a thick coating that has only the remotest resemblance to their original shape.”